Joni Blinderman, a 15-year veteran of the foundation, looks ahead to Covenant's future 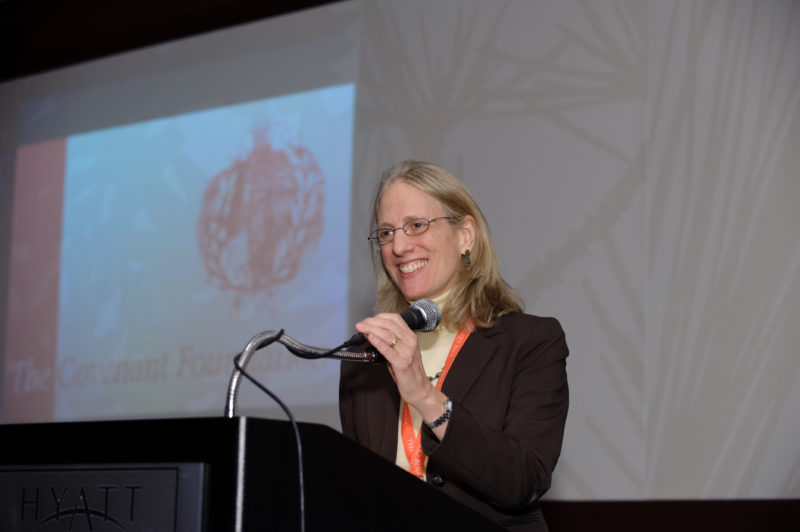 As she takes over as executive director of the Covenant Foundation, Joni Blinderman appears focused, at least for now, on weaving the Jewish community back together after nearly two years of pandemic disconnection. The new round of grants made last week by Covenant, a foundation that seeks out innovation and excellence in the field of Jewish education, puts a premium on what people seem to crave now after two years of pandemic pivots: connection, or more precisely reconnection.

“People need community right now,” Blinderman told eJewishPhilanthropy. “They always do. But it’s really important right now. They need healing, they need renewal, they need to be heard and to gather in whatever ways we can gather.”

Blinderman pointed to two multi-year grant recipients using the community mikvah, or ritual bath, to gather in the community and address needs and questions highlighted by the pandemic.

At Adas Israel in Washington, D.C., the “Stepping Back In” program will create experiences like guided mikvah visits, new liturgy and artistic experiences to promote reconnection for those who suffered from loneliness, fear and loss during the pandemic. Through “Mikvah L’Amcha: Mikvah for the People,” the American Jewish University in Los Angeles will launch an effort to connect a new generation to the idea of the ritual bath by establishing diverse educational partnerships and creating opportunities for immersion for people who were deeply affected by the pandemic, like medical professionals.

“You can’t have joyful moments if you don’t feel safe in your community, your institution and sacred spaces. There’s a lot of suffering and a lot of trauma. We all need to feel that we matter, that we belong, that a community is here for all of us,” Blinderman said.

Blinderman has found her own sense of belonging at the Covenant Foundation, where she has spent the last 15 years. As the new executive director — she previously served as associate director — Blinderman replaces Harlene Appelman, who assumed the position in 2005.

Over the last two decades, as part of its identity as a “teaching and learning foundation,” Covenant has expanded the notion of philanthropy to include ongoing conversations with its grantees and award recipients, Blinderman told eJewishPhilanthropy.

“I think that there was a time when philanthropies were not engaging with their grantees in a deep way,” she said. “We work really hard to break down the power between the grantee and the philanthropy. We are talking with each other. We want to learn from them. They are learning from us. This notion of learning and teaching goes both ways.”

By way of example, Blinderman noted that at an annual summit for grantee project directors, the foundation’s staff sits with participants, “so we’re able to keep an eye out, to see who’s less comfortable, and draw them into conversation together.” By learning with and about the grantees, Covenant leadership learns about their influences and networks, including people who could become future grantees or partners. All of this work “brings people into our orbit who help to elevate conversation and excite synapses,” Blinderman said. “And we start to lower the temperature on this power issue that is typical between a philanthropic entity and its grantees.”

Unlike funders who might have rigid expectations about interactions with grantees, Blinderman said that Covenant’s process is “the antithesis of transactional.”

“It’s a philosophical issue,” she said. “How can people do their best if they’re under the microscope of a philanthropy? They can’t dream, imagine, or create, or sometimes can’t even be efficient because they’re nervous” about meeting expectations. And if a grantee’s plan changes because of extenuating circumstances — like a pandemic — Blinderman said Covenant invites conversations about what to do next. “We are trying to understand who they are and what they think and dream about all day. Let’s have the conversation and work together.”

The foundation was the brainchild of cousins Susan Crown and Barbara Goodman Manilow, and began in 1991 as a partnership between the Crown family, which is known for its extensive giving to Jewish institutions as well as causes in the Chicago area, and the Jewish Education Service of North America (JESNA).

As a relatively small foundation that awards an average of $1.7 million a year, Blinderman said, Covenant aims to make an outsized impact with their grantees.

That support includes boosting the visibility of their grantees in the Jewish media, and recommending them as speakers at workshops or conferences relevant to their projects and expertise. From dozens of Limmud Jewish learning conferences across North America and globally to more focused gatherings like The Collaboratory (a program  Jewish social entrepreneurs and intrapreneurs ), Prizmah (an umbrella group for Jewish day schools) and Voices from the Field (which serves after-school educators), these opportunities widen grantees’ networks.

“Beyond the checks we’re writing, this is a way to lift them up and to shine a light on them in their work, as leaders and as Jewish educators whose projects we’re supporting,” she said.

The Covenant Foundation is best known for The Covenant Award, the Pomegranate Prize for emerging Jewish educators and its multi-year Signature Grants for more established organizations and programs. Its Ignition grants, which fund “relatively untested” ideas, are much lower-profile, Blinderman said. The Jewish Farmer Network’s Farmer Torah Initiative, for example, will establish regional cohort-based learning for Jewish farmers to build cultural literacy and identity at the intersection of Judaism and agriculture. Shutaf’s Training for Inclusion Success, a disability inclusion program, will provide online training materials and resources to North American Jewish camp, religious school and youth program professionals.

Covenant’s peer-review system, in which the foundation engages experts in various fields to review submitted projects and proposals, is an integral part of the grant-making process, she said. While the foundation’s staff works directly with the potential grantees, peer reviewers read all the proposals, a selection committee gives feedback and the board makes the final decision.

“The rubrics may change and the system may alter, but basically, to anyone doing Jewish education anywhere in North America, we offer the opportunity to send in a letter of inquiry. They are invited with open arms. And there is no backroom where I’m sitting and saying ‘this one, not that one,’” she said.

Blinderman said that the current moment, when people are suffering loss, isolation and disconnection from community and rituals, requires the foundation — and the community — to lead with compassion and love.

“We have all suffered in one way or another, from solitude, losing family in ways we could not have imagined, to not being able to participate in [community] rituals,” she said. To that end, she continued, this year’s grantees reflect the needs of the larger community, from people needing to feel safe from institutional abuse in Jewish settings, a need that Pittsburgh-based grantee Sacred Spaces is addressing, to investing in young Jewish women’s leadership through jGirls Magazine’s “Learn Together” experiential leadership program for girls age 16-22.

In addition to bringing people in, philanthropy professionals need “to be out there as knowledge gatherers” in cities large and small, Blinderman said.

Although it’s been harder to make such connections during COVID, Blinderman said that Covenant is building “one big networking operation,” that includes being hyper-aware of the field overall. This ranges from watching social media and publications for exciting innovators and creative approaches to Jewish education to going to conferences, site visits and meetings (in-person and online). Making these kinds of connections is central to the foundation’s annual project directors’ meeting, Blinderman said. There, Covenant staff “engineers” where grantees sit to create what she calls “common” and “uncommon connections.” In the former, two artist-educators might be introduced to one another, in the hopes of sparking a collaboration; and in the latter, an artist might be joined with a technologist for a cross-genre conversation.

“We want to hear about them, gain knowledge and support them when we can.”

Blinderman said that Covenant has always had a big tent, “from the far reaches of one corner of our community to the far reaches of another corner. All of these people want to be part of our community. They want to belong, to feel wanted, be part of something that they feel is their birthright.” As an example, she mentioned Theater J’s “Expanding the Canon” program at the Edlavitch DCJCC in Washington, D.C., which will engage seven playwrights who are Jews of color with the goal of creating racially and ethnically diverse Jewish narratives. Such grants provide an opportunity to expand the tent, she said. “These [grants] are ways to embrace people and bring them in.”