At a recent bar- and bat-mitzvah celebration, Haredi protesters jeered and disrupted the services. One protester defiled a prayer book. 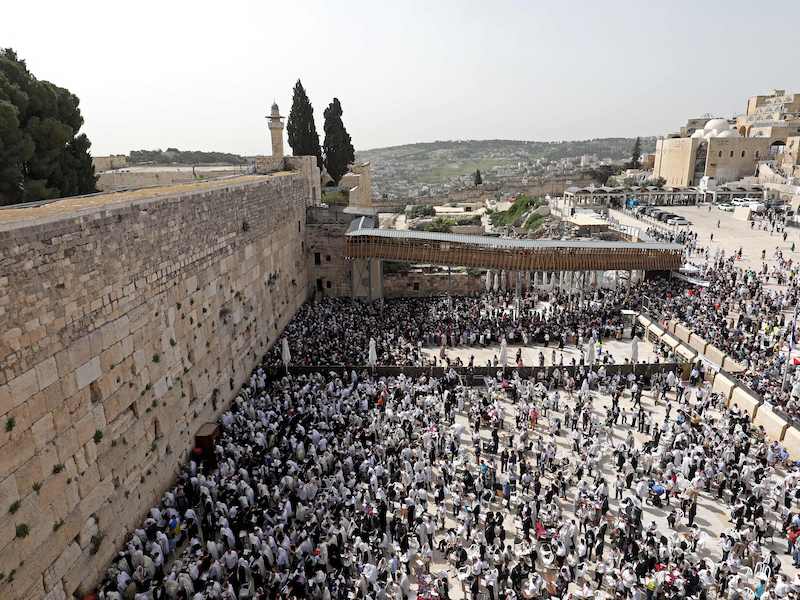 The Orthodox section of the Western Wall.

The Jewish Agency for Israel is calling on the Israeli government to ensure the security of worshippers at the Western Wall’s non-Orthodox plaza after a group of Haredi youths disrupted three Conservative b’nai mitzvah services there last month.

During the incident on June 30, dozens of Haredi young men crowded in the non-Orthodox prayer area, which is south of the main Orthodox plaza and known as Ezrat Yisrael. They jeered and disrupted the services, shoved attendees and, in the case of one protester, defiled a Conservative prayer book. Police were present but largely did not stop the disturbance.

The Jewish Agency’s Board of Governors unanimously passed a resolution on Tuesday evening calling on the Israeli government to work with The Jewish Agency to develop and implement a “detailed work plan” to secure worshippers at the site and prevent disturbances there. The Jewish Agency also committed to “take advocacy actions to [inform] the Israeli public about this grave situation and its impact on the global Jewish people.”

“The Board of Governors wishes to urgently communicate its demand to the relevant Government Ministries that such disturbances must stop immediately, as well as The Jewish Agency’s view that those Ministries are responsible to ensure the security of those using Ezrat Yisrael, and therefore [are] in charge of taking all legal actions to prevent such disturbances,” the resolution read.

In the two weeks since the incident, a range of non-Orthodox and Diaspora Jewish groups have condemned it, and Israeli Prime Minister Yair Lapid said that violence at the holy site “cannot continue.” Shmuel Rabinowitz, the Haredi rabbi of the Western Wall, also condemned “verbal and occasional physical violence that erupts among those coming to pray at the Western Wall, stemming from various extremist groups,” and called on “all sides to remove disputes and demonstrations from this sacred site.”

“This type of behavior is abhorrent, derech eretz [respecting others] is utmost,” Mark Wilf, the newly elected board chair of The Jewish Agency, told eJewishPhilanthropy regarding the June 30 disruption. “Every Jew around the world, no matter how they practice their own Judaism, should feel safe and respected praying at the Kotel,” the Hebrew term for the Western Wall.

Julie Platt, the chair of The Jewish Federations of North America (JFNA), said the incident was “terribly upsetting” and that the resolution, which board members affiliated with JFNA introduced, was a necessary step. Last week, JFNA, The Jewish Agency, Keren HaYesod and the World Zionist Organization sent a letter to Lapid saying his government “should accept responsibility to stop the completely unacceptable behavior that has been exhibited recently.”

“I don’t want anything to come in the way of a Conservative or Reform Jew, or any other stream of Judaism, to feel that this is not their homeland with which they have a connection,” Platt, who is also a member of the Jewish Agency executive, told eJewishPhilanthropy. “It was our responsibility, as we work on Israel-Diaspora relations, to do something that’s so obvious to make them better.”

Platt and Wilf both said they were hopeful that Lapid, who has long advocated for religious pluralism, would take action on the resolution. A spokesperson for the Prime Minister’s Office said it had no comment on the resolution.

“He has expressed the same sentiment that I just expressed about the need to honor all Jewish people’s right to pray freely at the Kotel,” Wilf said regarding Lapid. “There is a space there for these types of services… People that are in that area need to follow the law and if the law is not followed, or broken, it needs to be enforced.”

One matter the resolution didn’t address was the Western Wall compromise, an agreement passed by the Israeli government in 2016 that would have expanded the non-Orthodox site. The agreement was suspended the following year due to pressure from Haredi political parties, and more recent campaigns to persuade the government to implement it have failed. Natan Sharansky, the former chair of the Jewish Agency, was an architect of that agreement.

Mention of the agreement did not appear in the resolution in order to compose a text all voting board members could support. Rabbi Pesach Lerner, a Haredi member of the Jewish Agency board, tweeted on Tuesday that he pushed for the resolution to omit support of the 2016 agreement. “Due to our demand, the resolution does not include a call to implement the Western Wall outline,” he wrote.

JFNA and The Jewish Agency both told eJP that they continue to support implementation of the 2016 agreement.

“Our resolutions over the years, and the Kotel agreement, those remain in there, in our dialogue,” Wilf said. “But what this is about is simple basic facts: That when families from the diaspora or in Israel, wherever they come, you have young bar- or bat-mitzvah [celebrants], preparing, dreaming about a trip to Israel to the Kotel, to have their special personal family moment, for it to be upended, destroyed, disrupted by other Jewish people is something that’s not acceptable.”