Feel your breath: Mindfulness moving into the Jewish mainstream

The Institute for Jewish Spirituality is on the leading edge of spreading the Jewish gospel of meditation, as COVID has sparked a boom in the practice. 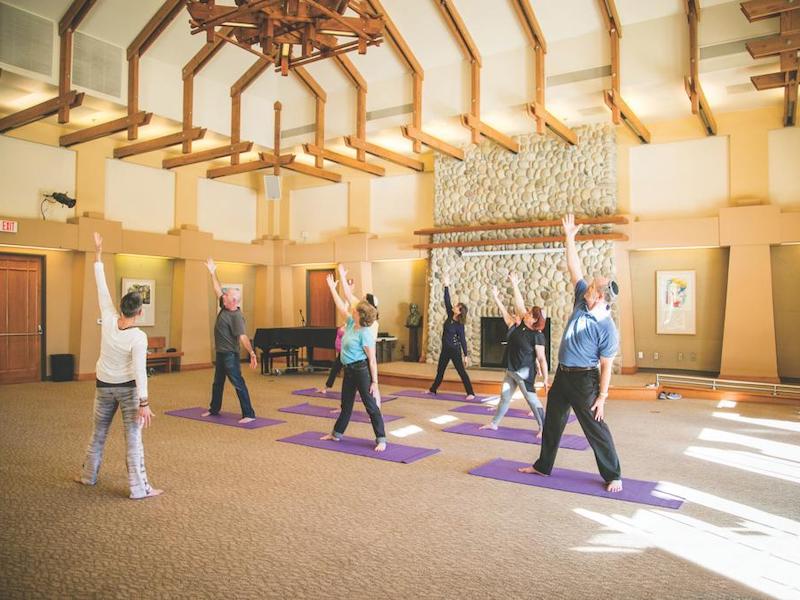 Courtesy of the Institute for Jewish Spirituality

Participants do an exercise at an Institute for Jewish Spirituality rabbinic retreat in 2019.

Imagine sitting down to a Shabbat dinner with friends — but before Kiddush, the host asks you to feel your own breath.

You then turn your attention to how you’re sitting — upright, with your feet on the ground. Next, you feel, look at and smell the wine, then consider the long process that brought it from grapes to glass. Finally, you concentrate on your desire to drink, take one more breath and recite the blessing.

That program, called a “drinking meditation,” is from OneTable, the group that helps Jewish young adults host Shabbat dinners. If the Institute for Jewish Spirituality (IJS) has its way, practices like that could become commonplace across the Jewish world, especially for young Jews. And the time is ripe, says the institute’s executive director, Rabbi Josh Feigelson, as the COVID-19 pandemic has fueled a boom in mindfulness practice as a way to manage the stress the pandemic has created.

“The pandemic, for anybody who’s in the mindfulness business, it’s been gangbusters, it’s been through-the-roof demand, because people realize, here’s something you can do to help manage your anxiety, to help you feel present and focused and connected at a time that’s disconnecting and isolating,” Feigelson told eJewishPhilanthropy.

The pandemic has seen a spike in the number of Americans experimenting with mindfulness practice, as tens of millions have downloaded meditation apps in the past two years.

Jewish groups have felt the trend, too: When IJS ran its first pandemic Zoom program, a meditation session on March 12, 2020, 41 people came. Nearly two years later, the institute’s now-daily virtual meditation sessions, which run around 40 minutes, draw an average of 350 people. In total, since the onset of COVID-19, the institute says it has had more than 200,000 engagements with people online, and quadrupled the donations it receives.

This week, the institute, which is based in New York City, is releasing a new strategic plan to make mindfulness and spirituality a core part of Jewish life across the country. It’s one of a few ways Jewish groups are placing a new emphasis on mindfulness and meditation. The Rohr Jewish Learning Institute, a Chabad-Lubavitch organization, is running an in-person mindfulness course in 450 of its centers, with some 20,000 participants enrolled. And Romemu Yeshiva, a Jewish Renewal yeshiva in New York City focused on mysticism and spirituality, is expecting hundreds of students to enroll in its virtual program this summer.

“This is the perfect moment to find people who are searching just to get to know themselves better and add purpose and meaning to the world, and to really focus their lives aligned with a higher purpose, aligned with Jewish values and spirituality,” said Rabbi Menashe Wolf, who created the Chabad course.

In its plan, the Institute for Jewish Spirituality calls for Jewish communal investment in mindfulness on par with other causes that attract significant funding, like Holocaust remembrance or Israel trips. The Jewish community’s current priorities, it says, neglect a growing mental health crisis that hasn’t spared Jews.

“For all of our communal investment over recent decades in continuity and community, too many American Jews — especially young American Jews — are still suffering emotionally and [are] disconnected Jewishly,” the report reads. “We’ve been overlooking spirituality, but it has been here all along. It’s time to take it seriously.”

The institute was founded in 1999 as a response to the “JewBu” phenomenon — referring to Jews who adopted Buddhist philosophy and practices, such as meditation. For the past two decades, it’s focused its energy on clergy and other Jewish leaders — showing them that there’s an authentic Jewish tradition of meditation and mindfulness, teaching them to meditate and training them to bring those practices to their communities.

Under Feigelson, who became CEO at the cusp of the pandemic in February 2020, the institute is widening its reach to the entire Jewish community — and young people in particular. The first piece of the strategic plan — which comes with $3.6 million in new grants — is a survey on the spiritual lives of Jewish young adults ages 13 to 25.

Other pieces of the strategic plan center on bringing mindfulness programming to spaces where young people already gather, like Jewish summer camps. It also includes new hires for the institutie and expanded virtual programming — perhaps a mobile app. The new grants come from several large Jewish funders, including the Jim Joseph Foundation, the Charles and Lynn Schusterman Family Philanthropies, Crown Family Philanthropies and the Joyce and Irving Goldman Family Foundation.

“Twenty years ago, words like ‘mindfulness’ or ‘meditation’ were still pretty ‘woo-woo,’ kind of out there,” Feigelson said. “Now you can literally walk through the supermarket and in the checkout line find the special issue of Time magazine about mindfulness practice…. If we as a community don’t respond to that, it’ll be the next generation of JewBus. We have an opportunity and we also have some urgency around this.”

One of the partners on the survey is OneTable. OneTable offers IJS access to young people, and the Shabbat dinners are a setting where Jews could perform a mindfulness exercise like the pre-Kiddush “drinking meditation” — which was written by Alison Laichter, a meditation teacher who has taken part in IJS programming.

“I dearly wish that the skills that I have cultivated now at this stage in my life, if I had had the opportunity to develop them at a much earlier age, the age of the OneTable participants, my life would have been much richer,” said Aliza Kline, the president and CEO of OneTable, who called herself a “devoted” participant of IJS programs and is still in close touch with a study partner she met at the institute.

While the pandemic has made mindfulness programming much more popular, it has also meant that the core way meditation was generally taught — together in rooms, or on retreats — has become difficult and at times impossible. But Jewish meditation teachers say that the shift to virtual has its own advantages — like allowing people to more easily access programming and integrate meditation into their lives on a regular basis.

A Zoom program, said Sarah Chandler, the director of Romemu Yeshiva, is cheaper and easier to get to than a weeklong silent retreat in Connecticut. Feigelson called meditation “something you can do that doesn’t require a prescription, it doesn’t require any money, you just need a pair of lungs and the ability to sit quietly for a little while.”

Chandler, who is an ordained Hebrew priestess, added that there’s still power in group meditation, even if you’re sitting at home in front of a screen.

“It’s helped people keep up their practice in their homes,” she said. “I can’t tell you how powerful it is to watch dozens of people open their computer screens, put in their headphones, turn their camera on, but then mute, and then literally sit in silence for 45 minutes.”