According to the group that filed the complaint, the U.S. Education Department has opened an investigation into the allegations. 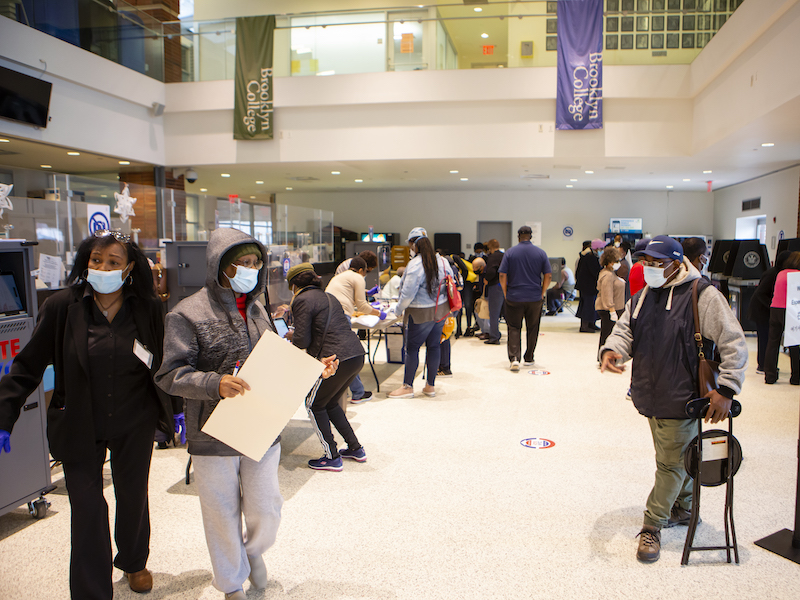 Two students attending a master’s degree program in mental health counseling at Brooklyn College claim in a federal discrimination complaint that they faced a “hostile environment” toward Jews in their courses.

The complaint was made under Title VI of the Civil Rights Act, which prohibits discrimination in federally funded institutions, including public campuses like Brooklyn College. It was filed early last year to the U.S. Department of Education on behalf of the students by the Louis D. Brandeis Center for Human Rights Under Law. In recent years, the organization has filed a series of complaints alleging antisemitism at schools nationwide.

The Brandeis Center said it received notice last week that the Department of Education’s Office of Civil Rights had opened an investigation based on the complaint. This appears to be the first Title VI antisemitism investigation opened by the department under President Joe Biden. A spokesperson for the department told eJewishPhilanthropy that it does not comment on ongoing cases.

The two students who submitted the complaint — one of whom is Hispanic — told eJP that they faced consistent pressure from other students and faculty to identify primarily as white, rather than Jewish, during class discussions of their personal identities, and were assumed to benefit from “white privilege” because they were Jews. The students asked to remain anonymous due to fears of backlash from the approximately 40 peers in their cohort.

“As somebody who has obviously grown up their whole life in a brown body, yes, I know that there is colorism and I’ve experienced it, but now that I identify as Jewish, all the sudden I’m white, and it’s like none of my experiences matter to you,” said the Hispanic student, describing the perceived attitude of students and faculty in the program. The student told eJP that they dropped out of the program on Monday, months ahead of graduation, due to the alleged discrimination.

Brooklyn College has about 4,000 Jewish students in a total student body of some 15,000. The school has been the site of other alleged antisemitic incidents in recent years, mostly surrounding debate over the Israeli-Palestinian conflict. In a statement to eJP on Wednesday, Brooklyn College spokesperson Rich Pietras defended the school’s record in standing up for Jewish students.

“Brooklyn College unequivocally denounces antisemitism in any form and does not tolerate it on its campus, and is committed to working cooperatively and fully with the U.S. Department of Education,” Pietras told eJP. “The College appreciates the important role Jewish Americans have played in the rich history of the country, the city, and the campus.”

The students said the discrimination began soon after they both entered the program in the fall semester of 2020, and would inhibit them from participating in class, which they said was an important component of the program.

“I would talk about my Jewish identity and then they would invalidate it and they would tell me I was white,” the second student told eJP, adding that faculty echoed those sentiments. “When we would bring up the fact that we don’t identify as white, they would bring it up to the rest of class. They would be like, ‘What does the rest of the class think? Do you think that Jews aren’t white?’ and different things like that, which could be very uncomfortable.”

Appeals to the administration went nowhere, the students said. The first student told eJP that they complained to a director of the degree program, who did not offer to address the issue. The student told eJP they then followed a formal complaint-filing process, but never received a response.

Nadya Drukker, executive director of the school’s Hillel, told eJP that “most [Jewish] students feel comfortable at Brooklyn College,” and that the school has “a strong Jewish community,” but that Hillel has urged the administration to adopt policies that would address antisemitic incidents promptly.

“Unfortunately, antisemitism is on the rise around the country and on college campuses,” she told eJP. “Brooklyn College is not immune. When we hear of troubling and upsetting incidents, we support the Jewish students and help them tackle the issue.”

The federal complaint proposes that the school condemn antisemitism and hold a training for its community on its nondiscrimination policies, with an emphasis on antisemitism. The complaint also calls on the school to create a task force focused on the atmosphere for Jews on campus.

“I’d like to see people stand up against antisemitism,” the second student said. “I want there to be support for us. I want to be able to identify as a Jew.”