The foundation will become a grantmaker beginning next year. 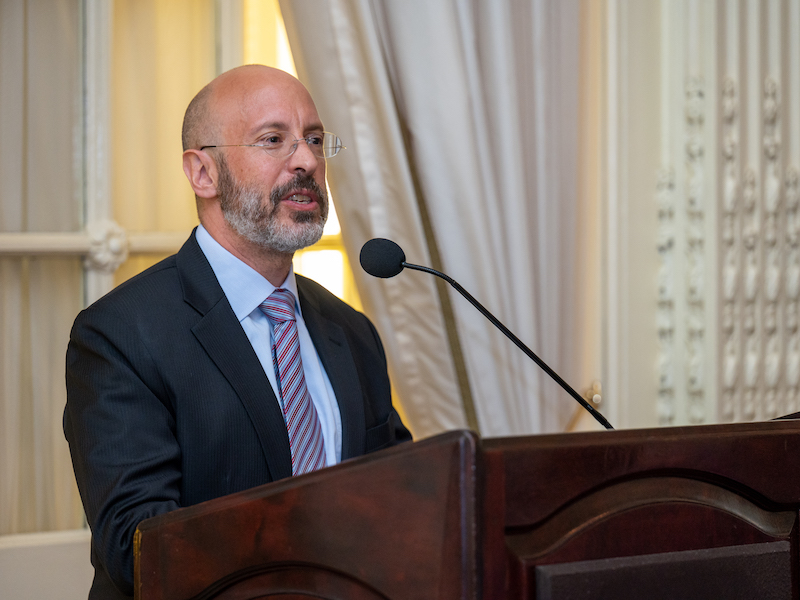 Elisha Wiesel speaks during the Elie Wiesel Foundation for Humanity's celebration of the 2022 Prize in Ethics.

When Elisha Wiesel, son of Holocaust survivor and Nobel Peace Prize laureate Elie Wiesel, spoke at a United Nations commemoration on International Holocaust Remembrance Day this past January, he began with the topics one might expect: the suffering of his father and grandfather at the hands of the Nazis, the challenges of children of survivors like himself and the dangers of present-day antisemitism.

But he devoted the last minute of his three-minute speech to a crisis half a world away from Auschwitz: the persecution of China’s Uyghur Muslim minority.

“My father firmly believed that his faith required him to fight hatred and oppression everywhere,” the younger Wiesel said. “Are we brave enough to follow? China… inflicts mass internment, forced labor and forced sterilization on the Uyghur people.”

The speech was one of a few ways Wiesel spoke out earlier this year about the plight of the Uyghurs, writing a viral Facebook post a week later on the occasion of the start of the Beijing Olympics and publishing a full-page ad by the Elie Wiesel Foundation for Humanity in The New York Times calling for a boycott of the games unless China changed its policy. The ad was cosigned by several Uyghur rights groups.

Now, eJewishPhilanthropy has learned, Wiesel has made speaking out on the Uyghur genocide a central part of the transformation of his father’s namesake foundation. The foundation is becoming a grantmaker, and Uyghur advocacy is one of its two initial focuses. The other is moral education through a Jewish lens. Wiesel told eJP that he sees both as ways to carry on his father’s decades of activism.

“We’re really thinking about ways that align with the different hats that my father wore, the different roles in which he showed up in the world,” Wiesel told eJP. “My father was an activist. This year the activist lane will be focused on the Uyghur cause… finding ways to help the Uyghur people articulate their cause, achieve change, gain the recognition that their cause deserves.”

The foundation hasn’t settled on a grantmaking budget yet, but plans to award approximately $250,000 to $500,000 in total to two groups, each representing one of the focuses. The grants will be awarded early next year and will be determined by advisory committees, each including some marquee names. The advisory board on the Uyghur grants includes former Soviet refusenik and Jewish Agency for Israel Chair Natan Sharansky, as well as Gulhumar Haitiwaji, the daughter of a Uyghur woman, Gulbahar Haitiwaji, who wrote a memoir detailing her experience in a Chinese concentration camp.

“What makes it especially powerful is the name of Elie Wiesel behind it,” said Mark Hetfield, CEO of the Jewish refugee aid group HIAS, who is also on the advisory board. “That’s where I think the real value add is… We dont want to equate [the Uyghur genocide] or compare it to the Holocaust, but it is a genocide.”

While the elder Wiesel was alive, his foundation focused on convening conferences of fellow Nobel Peace Prize winners, as well as other dignitaries, to advance peace and human rights. It also runs educational centers for Ethiopian Israelis. The foundation was a victim of Bernie Madoff’s Ponzi scheme in 2008, but Wiesel says it is now on sound footing, and it has a budget of approximately $600,000 and three employees.

The younger Wiesel, who worked for Goldman Sachs for 25 years, including as its chief information officer, is embarking on a new financial business venture while he also oversees the foundation’s transformation. The foundation will fundraise to cover the grants.

“We’re not intending to begin fundraising immediately, but we want to establish a track record that we can make smart, thoughtful, impactful gifts by using the combination of my father’s name, my input and the assets that we have to achieve change,” Wiesel said.

Wiesel has also been outspoken on other issues, including combating anti-Zionism and antisemitism. But he said the focus on Uyghur advocacy was inspired by his father’s activism in the movement to free Soviet Jewry, a cause that the elder Wiesel helped advance in the Jewish community by invoking his experience as a Holocaust survivor. Elisha Wiesel sees confronting China on the Uyghur genocide as a challenge of similar magnitude.

“My father had no problem standing up to the biggest aggressors in the world,” Wiesel said. “When the big powerful Soviet Union was keeping Soviet dissidents behind bars and preventing them from emigrating to Israel simply because they were Jewish…  My father had no problem going up to one of the biggest presences on the world stage and challenging them through his actions.”

In addition, while Wiesel expects that the selection process for the moral education grant will privilege Jewish organizations, he isn’t excluding the possibility that a non-Jewish group may be selected.

The foundation stands to join other Jewish groups that have spoken out on the Uyghur genocide. Jewish World Watch, which was founded 18 years ago to oppose the genocide in Darfur, advocated for U.S. legislation passed in 2021 banning goods made with forced labor in the Chinese province of Xianjiang, which is the Uyghur population center, and created a database of those companies with more than 900 entries, including Coca Cola, Apple, BMW, Volkswagen, Nike and others.

“Because of what’s happening to the Uyghurs and how scarily similar it is —  people being taken in the night, families being separated, being put on trains, sent to concentration camps, having your head shaved when you arrive… there is a unique role that the Jewish community can play,”  Serena Oberstein, Jewish World Watch’s executive director, told eJP. “We know better than anyone else what happens when the world sits silent, which means we have to be amplifying voices.”

Wiesel knows that the foundation’s grants alone will not end the oppression of the Uyghurs, and hopes to work in partnership with other organizations, including Jewish groups. But he hopes that along with advancing that cause, the foundation’s work on  behalf of the Uyghurs will show people that the legacy of Elie Wiesel extends beyond the seminal memoir Night, and is still relevant in the present day.

“In the coming years, success is that when people think of my father the experience doesn’t stop at Night,” he said. There’s this idea that all of these people who are reading Night — and thank God so many people are reading Night — there’s this concept that Elie Wiesel and the things he stood for are still taking place in the modern day.”