One participant said their small group discussed the question of “How do we say ‘affiliation’ in Hebrew?” 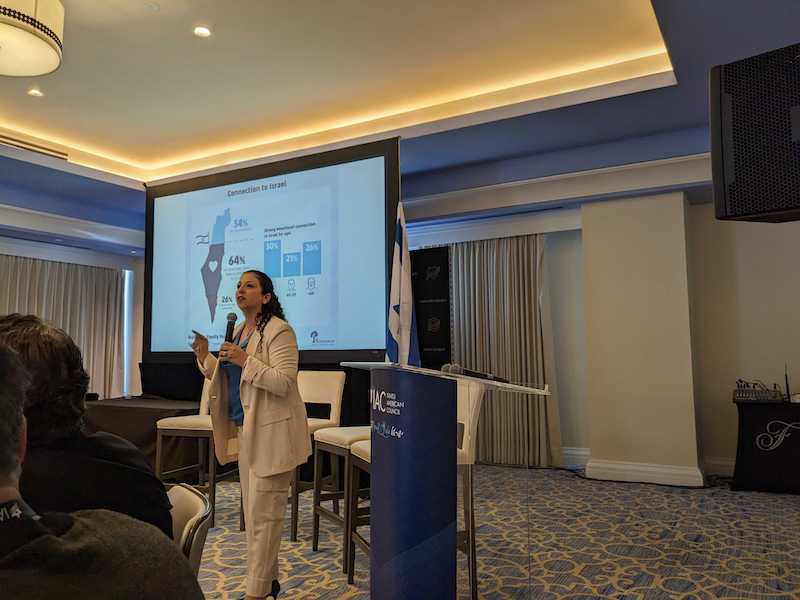 The biggest difference between the Israeli-American Council’s national conference and other major Jewish gatherings isn’t the subject matter — antisemitism, Israel-Diaspora relations and engaging the youth remain mainstays — but the language heard in the hallway. While most sessions are in English, the sideline conversations are overwhelmingly — and perhaps unsurprisingly — in Hebrew.

Yesterday, approximately 100 Jewish leaders gathered, essentially, to ask: Is that a good thing?

The program, which met at the IAC National Summit in Austin, Texas, yesterday afternoon, explored what separates Israeli Americans from the mainstream American Jewish community and how to better integrate the two.

Israeli Diaspora Affairs Minister Amichai Chikli, who spoke to the gathering, lamented the small fraction of Jewish children in day schools, and suggested that Israel could take measures to make Jewish education more affordable, though he did not explicitly say that Israel would subsidize tuition.

The program was planned as the first in a series of similar roundtable discussions that aim to strengthen the bonds between Israeli Americans and other American Jews, and better integrate Israelis into American Jewish communal leadership. Participants sat at tables with name cards that featured pictures either of Theodor Herzl or the Statue of Liberty, and were given small bags of Bamba peanut snacks during the event.

“The Israeli community here is growing dramatically, and it doesn’t matter what we think about it, if we’re happy about it, if we agree with them,” said Shira Ruderman, executive director of the Ruderman Family Foundation, which co-sponsored the program along with the IAC. “We do need to see it as an opportunity: How do we make them part of the American Jewish community? How are we making sure that they are helping us to be a bridge to the State of Israel?”

As Jewish federation heads, donors and nonprofit executives, as well as IAC staff members, discussed the gap, the literal language barrier was one of several issues that came up. But the idea that speaker after speaker advanced was that the two segments of the Jewish community were speaking two different metaphorical, or cultural languages.

Some people lamented that too much IAC programming is in Hebrew, creating an obstacle for American Jews who may want to get involved. One participant said their small group discussed the question of “How do we say ‘affiliation’ in Hebrew?”

One participant, describing a small-group discussion, said that there is also a divide between Israelis in America and other American Jews when it comes to philanthropy. “We also spoke a lot about the expectation on the American side about a pay-for-play mentality, that institutional involvement in American Jewish life often comes with making charitable contributions,” the participant said, adding that that way of thinking “is not always part of the same cultural phenomena that first-generation Israeli Americans tend to have.”

Throughout the first half of the three-hour gathering, some participants mentioned Israel’s new right-wing government as a potential source of tensions in relations between Israelis in America and other American Jews. In breakout discussions about divides between the two populations, multiple groups described “the current political situation in Israel being a cataclysmic earthquake in how the two groups, the two communities are going to interact: the politics in Israel… is going to impact the communities in a more divisive way.”

“There continues to be a very growing divide [between Israeli and American Jews], a fraying relationship that’s not getting better, it’s getting worse,” said Eric Goldstein, CEO of the UJA-Federation of New York, during a panel earlier in the session. “So many Israelis really don’t have any real appreciation for American Jewish life. They believe it’s completely dying and that we need Israel to come save us. And I think American Jews don’t really understand — the majority — the reality of living in Israel, the security situations.”

Goldstein suggested that Israeli Americans could help bridge that divide. He called that community “a unique bridge, because they speak the Israeli language but they live in their communities in America, and I think they understand much better than many of their relatives that it goes the other way too.”