The themes of the festival this year are heat, power, connection, trust, money, and beauty. 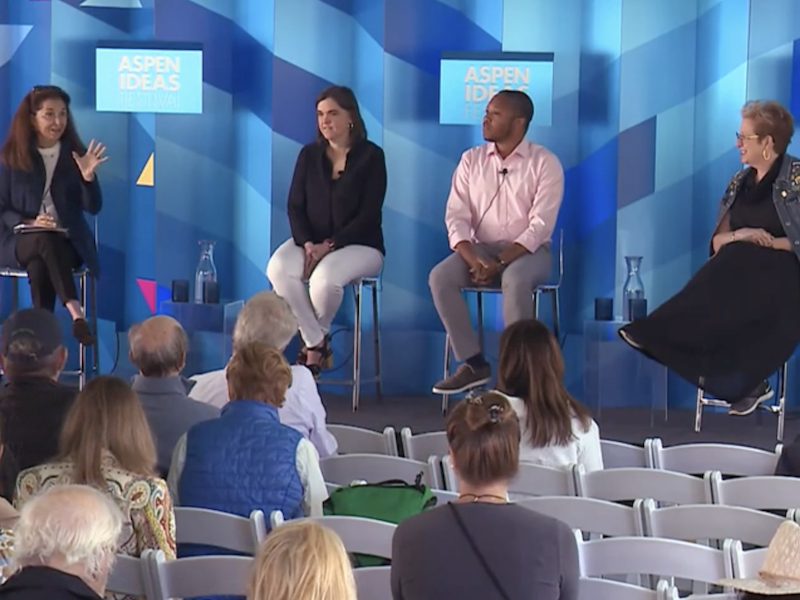 A philanthropy panel at the Aspen Ideas Festival this week.

It’s summer, which means that a broad spectrum of prominent voices on anything from politics to economics to healthcare to philanthropy have gathered in Colorado for the Aspen Ideas Festival. The festival, which is fully in person at the eponymous ski resort town for the first time since before the pandemic, began on Saturday and runs for the whole week.

The themes of the festival this year are heat, power, connection, trust, money, and beauty, and programming is interspersed with offerings such as hikes through the mountains or bird-watching. A range of A-list names will be discussing those topics — from Ukrainian President Volodymyr Zelensky (virtually), former Secretary of State Hillary Clinton and Sens. Rob Portman (R-OH) and Michael Bennet (D-CO) to former Google CEO Eric Schmidt and former Disney CEO Michael Eisner.

Prominent Jewish names in attendance, in addition to Eisner and Bennet, include Colorado Gov. Jared Polis, Atlantic editor-in-chief Jeffrey Goldberg, Politico executive editor Dafna Linzer and Anti-Defamation League CEO Jonathan Greenblatt. But while Goldberg will be speaking, the Atlantic is no longer a sponsor of the festival, as it had been in previous years. Instead, the media sponsor is NBCU News Group.

The festival’s panels discuss topics ranging from climate change to COVID-19 to the future of democracy, but one of its emphases is the way money operates in the present day. Just at the beginning of the week alone, there have been sessions on trust in private business, the reliability (or lack thereof) of cryptocurrency and the role of business in protecting democracy.

At a panel on Monday called “Philanthropy’s Role in Systems Change,” three leaders of philanthropic foundations discussed how philanthropy can shape the world and how it must respond to inequalities. Jen Ford Reedy, president of the Minnesota-based Bush Foundation, pointed out that the recent Supreme Court decision on abortion is an indirect product of a philanthropic grant given decades ago to launch the conservative Federalist Society.

“Foundations are changing the world and changing our lives around us, and we don’t always see it,” she said. “In a week like we just had where we had really really big national developments, Supreme Court decisions, it’s an opportunity to actually see what difference does philanthropy make and how are foundations affecting our direction as a country.”

Rodney Foxworth, the CEO of Common Future, which aims to make the economy more inclusive, said that part of changing systems involves empowering marginalized people to make funding decisions. “These are individuals that are most proximate, that have the most impact, that have developed expertise because of their lived experiences. So how do we actually make sure that they have power, how do we give up power, how do we share power?”

The third panelist, Walton Family Foundation Executive Director Caryl Stern, said philanthropy’s greatest strength is its ability to bring people together, which she said exhibited itself in the way foundations responded to COVID-19. “The power that we bring to the table that is exceptional for the foundation world is that we can be the conveners,” she said, “There’s an opportunity to bring like-minded organizations together very easily, but there’s also the opportunity to bring unlike together. We have to stop thinking of work exclusively within our sector.”