As she departs Hadassah, Janice Weinman shares what she learned, accomplished — and has yet to do

Weinman will become one of Hadassah’s 300,000 members, and already has her first assignment 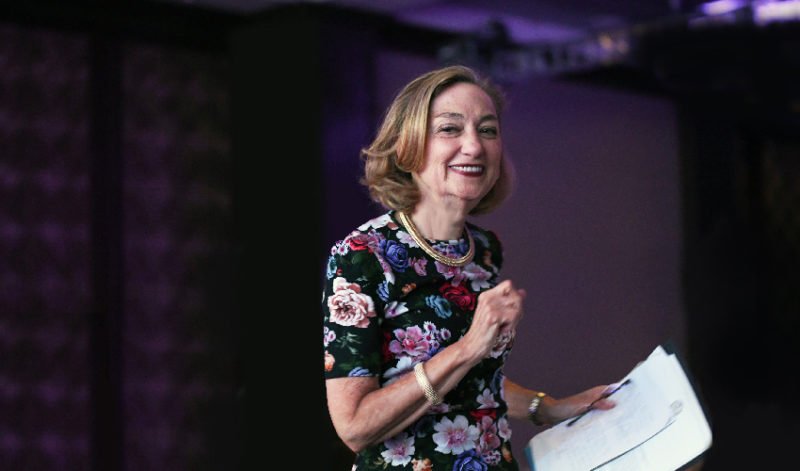 Yesterday was Janice Weinman’s last official day as CEO of Hadassah, the Zionist women’s organization she led for nine years. Founded in 1912 to provide medical care in pre-state Israel, Hadassah still funds and plays a role in managing two hospitals in Israel, and that work is a critical part of its mission. But as she departs her job after nine years at the helm, Weinman told eJewishPhilanthropy she most wants people to understand that Hadassah is also much more than its hospitals. Weinman joined Hadassah after serving as a nonprofit leader — of K.I.D.S., a child welfare organization, and the American Association of University Women — and in government, as assistant to the secretary of education in the Carter and Clinton administrations. Though she is leaving her post, she has committed to putting together a conference for Hadassah that will be held in January 2022. Spoiler alert: Janice Weinman is not retiring.

Helen Chernikoff: Hadassah is coming up on its 110th anniversary. It’s an iconic organization. What do people not understand about it?

Janice Weinman: People do not understand the scope. Besides the hospitals, which are exemplary in the research they do and the humanitarian outreach they provide, we support villages that serve at-risk youth in Israel. These are young people who have a lot of needs. They need skills — academic, psychological. They come and they leave totally transformed. There’s our ongoing support for Young Judaea [the Zionist camp and teen travel organization]. We have around 300,000 members, and we involve them so significantly in so many different aspects of Hadassah.

HC: Can you talk more about the membership aspect of Hadassah — the beauty of that, and the challenges?

JW: Leadership manifests itself in many ways. At Hadassah, it’s a matter of partnering with our volunteers, so leadership at Hadassah is a little bit different from being in an organization where the lay leadership is less active. At Hadassah it really is a matter of working, as colleagues, with the volunteer leaders and being able to make that be a productive relationship. It’s more of a give and take at every level. I don’t want to idealize it. It can be cumbersome. You want to get as many voices in as you can, so that the volunteers feel represented and that they have input. You want to integrate that but all of that takes time and process. The value of it is greater than the downside, but it is one of the things that does differentiate Hadassah.

HC: You came to Hadassah at a difficult time. There had been a three-year gap between CEOs, and three leaders were being investigated for financial impropriety at the time. What was the state of morale when you arrived?

JW: There was a great deal of anxiety about the future of the organization. I came in June of 2012, and in the fall, we had our 100th anniversary in Israel. It was like a rebirth. We had difficulties in 2014 with the hospitals, as well, and had to go into a recovery agreement. The hospitals have been working very hard to overcome those financial challenges. It’s a very resilient organization.

HC: It’s been a priority of Hadassah’s to attract younger women among its supporters. How would you evaluate the success of that effort during your tenure?

JW: We have gotten some traction on that. We have a group of 52 younger women who are the leaders and presidents of the different chapters around the country. We have created a network around them; they share best practices and they help represent Hadassah to the country at large. For example, I just chartered a new young women’s group in California with a woman who is a Jew by choice and really typical of the younger women we’re bringing in. They really care about Zionism and are committed to carrying those values to the next generation. They go to Israel on an experience that rejuvenates them, and then they come back and join this network. We work closely with them in deciding what kinds of programming and activities they want. They are interested in programming about Israel and in health programs for themselves. One of our programs, “Every Move Counts,” integrates wellness and fitness and Israel education. That’s unique to Hadassah.

HC: What accomplishment would you want to point to, if you had to pick one?

JW: The passage of the Never Again Education Act. I was able to be at the right place at the right time when Congresswoman Carolyn Maloney [D-NY] indicated her interest in passing such a bill. I told her that Hadassah would deliver for her and we did. We believe, and this is particularly important, that providing education for the next generation about the consequences of the Holocaust and the impact of hatred and discrimination and bigotry is critical for the future of the democracy.

HC: As you say goodbye, what still worries you?

For the organization, we need to make sure that our hospitals have the financial support that they need in order to flourish. We have some major medical stars there that we want to nurture, particularly in the field of oncology.

HC: Why do you think this narrow notion of Hadassah — associating it primarily with the hospitals — persists?

JW: It’s a communications challenge. It’s harder to change an image than to create one. People have looked at Hadassah as a legacy organization rather than as an evolving organization that is far more modern and far more active than people realize. We have tried everything — social media campaigns, opinion pieces, placements in the media beyond the Jewish media, an advertising campaign. It has taken longer than we would have wanted, but I think more and more we are known also for the advocacy work that we do.

HC: Do you have advice for people who want to be leaders? About work-life balance, or attitude, or focus?

JW:  You’re asking for advice from someone who’s a workaholic so I can’t speak much to balance, but I can say the most important aspect of a career is to be optimistic. Also — and this is hard — to have a sense of humor. To be respectful. I have been working for 51 years now and I have learned every day from others.

I believe in very high standards, and sometimes people may think that I’m being critical. I’m not. I’m just being a perfectionist. And that’s another thing. You can’t always be a perfectionist when you’re running an organization. Because as much as we try for the highest of all standards, we have to leave some room for error and some room for improvement, as long as the focus is on improvement.

HC: So what’s next? I have a feeling you are not going to stop working.

JW: I will never stop working. Maybe I’ll find another full-time situation. Maybe I’ll move onto new boards; I already serve on several. The conference I’m going to be organizing for Hadassah is going to be called “The Power of Purpose.” I look forward to the next phase, but I’ll miss Hadassah. I don’t want to say that it’s a sisterhood, because that’s old-fashioned, but it’s a group of women who care about each other. They really rise to the occasion to take care of each other.