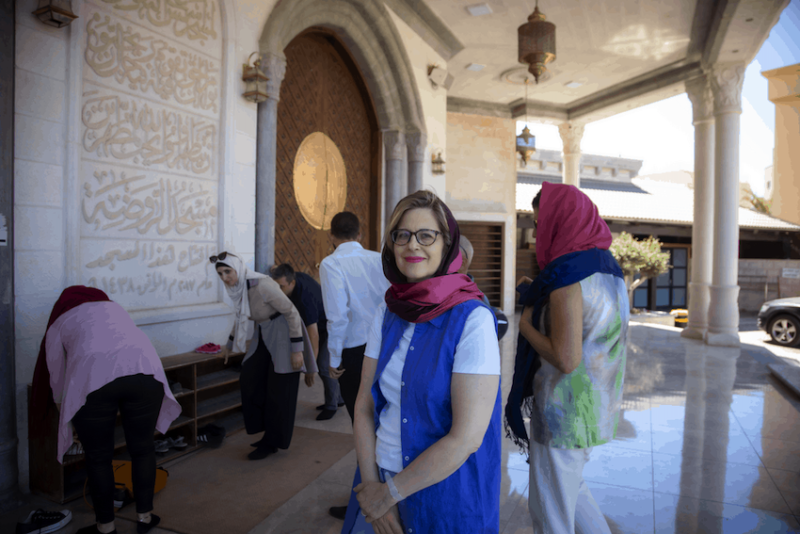 When Ariel Zwang, the CEO of the American Jewish Joint Distribution Committee (JDC), talks about her job, she goes back to her great-grandparents, who immigrated to the United States for a better life at about the same time that JDC was founded to help Jews around the world. The organization’s mission has broadened since that time, but it hasn’t changed, Zwang told eJewishPhilanthropy in a Zoom conversation from a balcony in Jerusalem, where she was ending a five-week tour of JDC’s Israel operations.

“My ancestors came from Eastern Europe in the 1920s, and they were hoping that I would have the life that I have had,” said Zwang. “I grew up with a tremendous sense of gratitude.”

The Joint, as it was historically known, and as Zwang calls it, was founded in 1914 to help Jews living in present-day Israel under the Ottoman Empire, after which its work expanded to assist European Jews during, between and after World Wars I and II. Decades later, it supported Eastern European Jewish communities in the former Soviet Union. Today, the Joint still provides humanitarian assistance to the European victims of Nazism and Communism, and spent 44% of its $340 million budget in the former Soviet Union in 2020.

Born in New York City and raised in Connecticut, where her father was the principal of Solomon Schechter Day School of Greater Hartford, Zwang focused as an undergraduate on applied math at Harvard’s John A. Paulson School of Engineering and Applied Sciences, and received an MBA from Harvard Business School in 1990.

She became a management consultant, but decided in her late 20s that she wanted to help Americans living in poverty, which led to a career in the nonprofit sector. She started in the New York City Department of Education, and became the executive director of the volunteer organization New York Cares in 2001. In 2008, she became CEO of Safe Horizon, the largest U.S.-based nonprofit serving victims of crime and abuse. Her hire at JDC, where she replaced interim CEO Asher Ostrin, was announced in October 2020.

Before taking the job at the Joint, Zwang had never worked in the Jewish world, but “lived a deeply Jewish life from birth,” she said. “I went to Jewish day school and Jewish camps, my children went to Jewish day school and camps,” she said. “I met my husband through the New York federation. Shabbat is a sacred time for our family.” Zwang is vice president of the synagogue to which her family belongs, B’nai Jeshurun, on Manhattan’s Upper West Side.

The Joint was founded at a time when most Jews saw themselves as responsible for each other, but that sense of peoplehood is weaker now, which could dilute support for an organization with such a Jewish-specific mission, said Karla Goldman, a historian and director of the Jewish communal leadership program at the University of Michigan.

While some traditional forms of Jewish life, such as synagogue attendance, are in decline, the Joint has been successful in making the case that supporting its work can itself constitute a Jewish act, Zwang said, citing its Entwine program, which focuses on travel and events for Jews in their 20s and 30s.

“The results are a growing cohort of young Jews interested in Jewish issues and passionately involved in Jewish life,” she said.

The Joint receives annual allocations from both the Conference on Jewish Material Claims Against Germany, which supports Holocaust survivors, Jewish Federations of North America and local federations. In 2020, funds from the Claims Conference made up 40% of the Joint’s budget, while the federations contributed 14.3%.

It operates in 70 countries, providing a safety net for Jews in distress, as in Venezuela, a country in economic crisis under its strongman president, Nicolas Maduro.

“Venezuela is a community that didn’t need the Joint for a long time,” Zwang pointed out. “It’s an example of how the fortunes and health and safety of Jewish communities around the world are never stable.” About 6,000 Jews live in Venezuela, a number that has fallen sharply since the 1990s.

In Israel, Zwang said, the mission is slightly different — it’s less about direct service to individuals and more about working to achieve systemic social change, such as combating the social and economic stagnation among Haredi men and Arab women.

The Joint piloted a professional development program that includes the mechanisms necessary to match those men and women with jobs, including outreach, training and counseling.

“We identify big needs, and help work on those by pioneering new ideas. Then the government or other philanthropies scale them up,” she said.

When Zwang started at the JDC, the organization had gone through a rough patch. Since 2013, no CEO stayed in the job longer than three years, and in 2019 and 2020, tension within the JDC — first around who would be the next board president, and then around the CEO search process that ultimately selected Zwang — spilled into public view.

The various camps and parties wanted her help to reunite them, she said. She found that the deepest grievances were not about substantive issues of mission or vision, but about governance issues that she and board president Mark Sisisky were able to work on.

“We have framed processes so that everybody feels heard, and the process is more transparent so that people know how decisions are made, who made them and what was their criteria,” she said.

Zwang has a calm demeanor that belies her intensity, said Steve Parrish, a former Safe Horizon board chair who worked with Zwang for about a decade. “She has a very strong commitment to excellence and performance, but it’s driven by her commitment to the mission,” he said.

Despite her busy schedule, Zwang believes that everybody needs a break — including herself and other people who work in nonprofits.

“You need some respite for yourself in order to serve other people,” she said.

When she spoke with eJP, she was looking forward to returning home to New York, and about to treat herself by eating ice cream for dinner.

The University of Michigan’s Goldman, who has a scholarly expertise in the role of women in American Jewish life, noted that no woman has ever before run such a large Jewish organization, which Zwang acknowledged.