Focusing on energy, excitement and fun marks a shift back to the norm for Coastal Roots Farm, which spent a significant portion of its energy during the past two years responding to increased needs brought about by COVID-19. 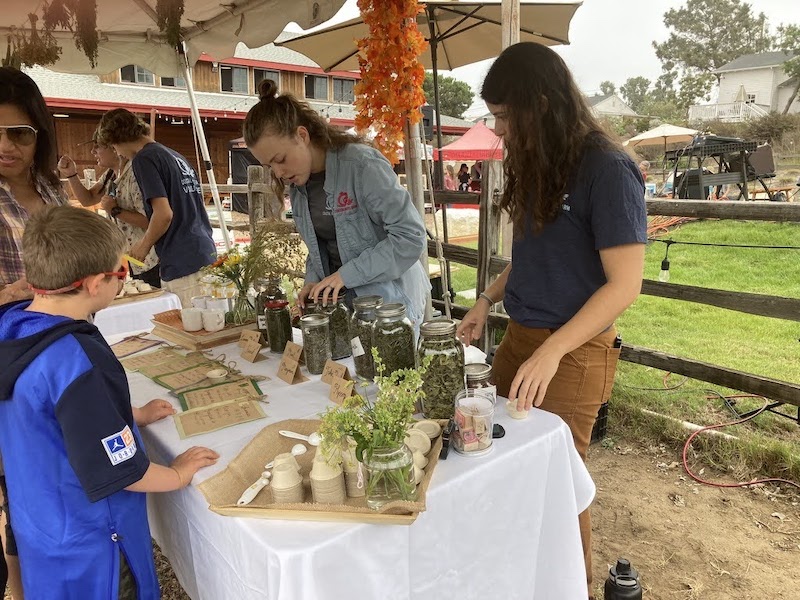 Attendees work with jars of herbs at the Sukkot Harvest Festival at Coastal Roots Farm on Sunday, Oct. 9.

On Sunday, as Jews across the world decorated their sukkot, a group of about 1,000 people at a farm outside of San Diego prepared for the Jewish fall harvest festival by tasting recipes, bundling tea from locally grown herbs, drinking kombucha and learning about sustainable agriculture.

The occasion was the annual Sukkot Harvest Festival at Coastal Roots Farm in Encinitas, Calif., whose agricultural work and educational programming sits at the intersection of sustainability and Jewish tradition. Attendees gathered just yards from where the farm’s crops — from herbs to pomegranates and seemingly everything in between — grow in verdant rows and lush fields.

Despite a somewhat overcast sky, the mood at the site, less than a mile from the Pacific Ocean, was bright and effervescent. Coastal Roots educators were stationed at various intervals: in front of the chicken coop, where hens and roosters skip across the plot of land, eating leftover produce and helping clear the land for the next crop; next to a vermiculture container, where worms consume vegetable waste and shredded paper, emitting castings (or, worm excrement) that fertilize the soil.

Children and their parents frolicked in a central yard, eating and dancing to the sounds of Americana band Coral Bells’ classic rock covers, as well as in an interactive play space, with climbing structures and food education-related programs. Attendees decorated the farm’s sukkot as well.

“Sukkot is known as the holiday of our great joy,” Charlene Seidle, executive vice president of the Leichtag Foundation, the farm’s principal funder, told eJewishPhilanthropy. “Today’s festival shows how energized and excited our community is to spend time together — learning, having fun, celebrating being Jewish and connecting with the generations-treasured traditions of our ancestors, and giving them renewed resonance and meaning in 2022.”

Focusing on energy, excitement and fun marks a shift back to the norm for Coastal Roots Farm, which spent a significant portion of its energy during the past two years responding to increased needs brought about by COVID-19. During the pandemic, Coastal Roots doubled its food production to more than 80,000 pounds of food per year and provided food to people who needed it. According to the farm, one in three area families is food insecure.

It also provides educational opportunities for schools, offers scholarships to low-income families and after-school programming — in which kids ages Pre-K to 5 act as “Farmers-in-Training” — participating in farm chores, learning where food comes from and spending the afternoon outside.

The farm held the Sukkot Harvest Festival during the pandemic as well, creating a drive-through version where attendees visited each station in their cars.

Javier Guerrero, the farm’s president and CEO, told eJP that in the past year, the number of youth visitors has more than doubled, to upwards of 6,000 people. Coastal Roots, which has a budget of $2.3 million, employs seven full-time educators, as well as an inaugural director of Jewish life, Rebecca Joy Fletcher, who co-hosted a food demonstration at the harvest festival, sharing Jewish knowledge about the foods featured in the recipe.

“I’m a people person,” Guerrero said. “I get excited about creating experiences for people that get them lit and excited about learning… And community events today like Sukkot. Getting people to come out to experience what we’ve created is just magical.”

In addition to income from produce and programs, partnerships with local foundations, corporations and government entities keep the farm’s work funded. Leichtag has reduced its support each year as Coastal Roots moves toward self-sufficiency.

The farm’s pandemic activity stemmed from its year-round work. Coastal Roots, which is a nonprofit, aims to cultivate community through sustainable agriculture and teaching about food justice and ancient Jewish wisdom. Its organic farm stand runs on a “pay-what-you-can” model to create the greatest possible access to eggs, flowers and fresh produce. People who cannot afford to pay are offered up to $30 of produce at no cost.

The farm’s 17 acres include 2.5 acres of vegetable production fields, an education farm and garden, a large-scale compost operation, three flocks of chickens and an 8.5-acre agroforestry “food forest.”

Wherever possible, the farm incorporates Jewish and indigenous farming. traditions and practices, said Kesha Spoor, Coastal Roots’ director of philanthropy, program strategy and communications. The farm’s website acknowledges that the land is “indigenous to the Kumeyaay and Luiseño peoples.”

While Jewish farmers in Israel let their land lay fallow every seven years, a practice known as shmita that was observed this past year, Coastal Roots Farm observed its own interpretation of shmita, Spoor told eJP, rotating its crops and letting the land rest between plantings.

Spoor said that the practices at Coastal Roots are about “making modern [the ancient] things that we believe have a lot of value.”

“We’re not the inventors of these approaches,” Spoor said. “We’re looking back to agricultural wisdom from indigenous traditions, from Jewish wisdom and many other traditions as well.”