A Jewish farm in SoCal offers salts, honey — and a space for adults with disabilities

The farm, whose campus was destroyed in a 2018 wildfire, hopes to one day become profitable. 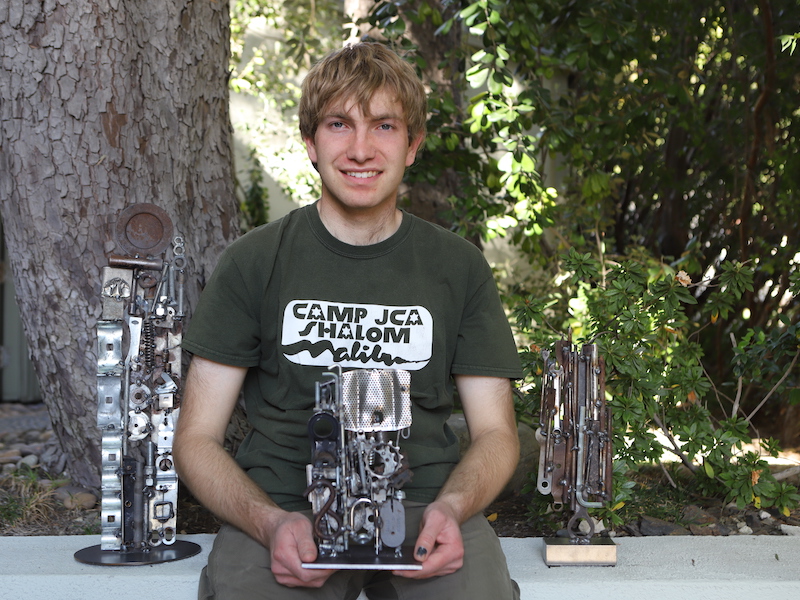 At their mid-morning business meeting, Shemesh Farms’ Farm Fellows check in with a supervisor to talk about their roles and goals for the day: which plants they’ll be working with and what jobs needed to be done — from harvesting and drying herbs to mixing, jarring and packaging the artisanal salt blends that they sell on their website, in local specialty stores and farmers markets.

When their work day ends several hours later, they circle up again, to talk about what they liked, or didn’t, about their work.  One fellow shared that he contributed to packing and shipping, rolling jars of salt in bubble wrap.

“Did you like it?” asked Michelle Cait, the farm’s outgoing director. “Maybe not,” he replied, “but I’m OK now.”

“Sometimes when we try something new, we don’t like it at first,” Cait responded. She was also hoping to impart a lesson to the other fellows in the room: young adults who have what Shemesh Farms describes as a range of “special needs and diverse abilities,” including physical disabilities, autism and spectrum disorders.

Shemesh Farms is part of the Shalom Institute, an experiential Jewish educational organization that also runs Camp JCA Shalom, a residential summer camp for kids; and Camp Gesher, an overnight camp on the West Coast for campers from Russian-speaking Jewish families. After the November 2018 Woolsey Fire incinerated nearly 100,000 acres in Los Angeles and Ventura counties — including the campuses of JCA Shalom and two other Jewish camps — Shemesh Farms moved to its current temporary home at the Malibu Jewish Center & Synagogue, off of California’s Pacific Coast Highway, which — on a recent weekday — provided a constant stream of almost ambient background audio for the farm’s agricultural work.

Cait, who has been with the program since the beginning, said that Shemesh Farms is “human-centered,” taking the varying needs of the fellows into account, encouraging their talents and challenging them to grow, to “explore various work modalities in order to find what is meaningful,” she said.

“We encourage flexibility and some fellows feel best moving around to various work tasks while other fellows need to stick with one thing and get really proficient at it,” she said. “We are inspired to help stretch each person that works or volunteers at Shemesh. If a Farm Fellow is working in the kitchen module for a whole year and it’s meaningful and they experience competency and confidence, super! For other Farm Fellows, it’s time to try a new work module and they choose what interests them. ”

The farm’s current budget is $300,000, and it has four employees, 60 Farm Fellows and 10 volunteers who help out when the fellows are on site. Eventually, the farm hopes to fully support itself through its sales and other income, though it isn’t there yet.

“Shemesh Farms is a sustainable enterprise that offers a new pathway to meaningful Jewish life by exemplifying community, inclusion and job training,” Naomi Strongin, vice president of the Jewish Community Foundation of Los Angeles’ Center for Designed Philanthropy, told eJP. The center gave Shemesh Farms a grant in 2015, and introduced it to another funder, the Erwin Rautenberg Foundation, which has given it multiple grants. “Shemesh emerged to fulfill an important communal need by offering connectivity – a sense of purpose and belonging – for individuals with special needs,” she added.

Parents of the fellows say the farm provides a rare comfortable space for their children to learn and grow. Jennifer Novak’s 23-year-old son Ben is a neurodiverse artist who works in metal sculpture and has been working at Shemesh Farms intermittently since it started. Since the end of May 2021, Ben has been going twice a week.

“Shemesh Farms is the high point of his week… Shemesh is the one place in Los Angeles that was truly made for him and his peers,” Novak said. Because the program teaches independence, she is not on-site to see him in action, but understands that her son enjoys sorting, crushing and grinding the herbs, and picking up acorns to replant so they grow into new trees.

The small size of the program and the high ratio of staff and volunteers to Farm Fellows makes it a much safer environment for workers with autism, some of whom may also experience seizures, Novak said.

“There are so many people there to help who know what to do for a seizure,” she said. “And community-wise, it’s nice to work alongside other people who share the same challenges. Being among other young adults who have had several trips to the ER, take anti-seizure [medication] or wear helmets is so comforting and normalizing,” Novak said.

The idea for Shemesh Farms grew out of a 2012 trip to Israel, organized by the Jewish Federation of Los Angeles and attended by Shalom Institute Executive Director Rabbi Bill Kaplan, Cait, Novak and several others who work adjacent to the disability space or have children with disabilities. The trip focused on how Israeli organizations — like Kibbutz Kishorit, Beit Issie Shapiro and Kibbutz Harduf, which has a program for adults with disabilities — were serving young adults on the autism spectrum. The Shalom Institute welcomed its first Farm Fellow that autumn; by 2013, it had five fellows, and the enterprise officially began in 2014. As the program developed, the farm hired a director to help build the garden, then it created the online store, and began recruiting farm fellows from disability day programs.

“It is an inspired distillation of the best of what we saw in Israel,” Novak said, “a business that creates community and fosters a sense of belonging, productivity and accomplishment, all in an environment that is comfortable and manageable for adults with diverse abilities.” In addition, she said, “Shemesh Farms makes products that are delicious and widely appreciated, and you have a recipe for success and happiness.”

The salts have a strong following, and the blends are cleverly named, often with the Jewish calendar in mind: Shofar So Good, Whole Latka Love and Karpas Diem, which includes parsley, onion blossoms, horseradish and Himalayan pink salt and reflects some of Passover’s flavors.

In addition to harvesting herbs like rosemary — which grow from the ground — and collecting lemons from the Malibu Jewish Center’s trees — which contribute zest to the blends — the fellows also work with staff to monitor and harvest hydroponic herb towers that gurgle as they irrigate the towers growing parsley, cayenne peppers, green onions, mint and more. The towers run on a concentrated hydration system that allows them to produce herbs rapidly; just one tower could produce a year’s worth of salad, Bodenstein said. (Shemesh Farms has nine towers, and the Shalom Institute site has two.)

The fellows also help to “feed” a compost heap at Malibu Jewish Center, Bodenstein said. She mobilized local families to drop off their kitchen waste at a local synagogue, and then drove the waste to the farm. In addition, the fellows have compost bins at home which they bring with them when they come to work at Shemesh Farms.

“We’re serious about [having] as little waste as possible,” Bodenstein said, adding that the heap looked “active,” meaning that the fellows had been adding layers of greens, browns, and alfalfa to the waste, and an outside firm had also been tending the pile, adding manure and wood chips. “Then we water it, because it’s a living being,” Bodenstein said. “We need heat to break down all the fruits and vegetables and stems. I’m sure there’s a million acorns in there too. The compost is a super important part of the process because in the spring, we’re going to be starting the next crop, and we’re going to have to really fuel the soil with nutrients.”

Kaplan, the Shalom Institute’s director, called it “a small independent 501(c)3” that is able to take risks that larger organizations would balk at, with an attitude of “let’s just do it, go make it happen.” In the case of Shemesh Farms, he added, “it happened. And then all of a sudden, it really, really took off.” Even before the 2018 fire destroyed the farm’s main campus, he said, the Shalom Institute was exploring opening satellite sites that could serve more fellows.

More than three years later, the Shalom Institute’s recovery from the fire is just beginning. It’s announcing a capital campaign shortly, and while the target amount could shift, Kaplan estimates it will be a $20 million recovery effort.

Bodenstein hopes to restore the Shalom Institute’s scorched site ecologically, a task with many sub-projects, like using barrels to catch incoming rain for use on the farm; choosing solar or renewable materials to rebuild camp structures; and starting native and pollinator species restoration.

“My job is keeping eyes on the prize, how sustainable is each thing [we’re doing],” she said. The work focuses on “a strong pivot toward sustainability and inclusion, as much as is humanly possible,” Bodenstein said.

“It’s unbelievable that [sustainability is] still not on the up there on the agenda for many institutions,” he said. “When it comes to sustainability and inclusion,” he added, Shemesh Farms is “actually the integration of the two. It’s super important, and it’s a natural fit.”