Your Daily Phil: JFNA brings teen engagement group into the fold + How a group of Israelis rescued Afghan refugees

The Jewish Fertility Foundation (JFF), which provides financial and emotional support in four Jewish communities for those experiencing infertility, will conclude a matching campaign on Sunday that is also its first national fundraising effort, JFF CEO Elana Frank told eJewishPhilanthropy

“We previously had worked city by city,” Frank said. “But people outside our target service areas are donating even though the money isn’t going back to their communities just yet.”

The two grants — $50,000 from The Zalik Foundation and $10,000 from the Loftspring-Pelchovits Family — are a one-to-one match. JFF has given out more than $800,000 in grants, loans and clinic discounts toward fertility treatments.

Previously, JFF had raised funds in the cities where it operates — Atlanta; Birmingham, Ala.; Cincinnati and Tampa, Fla. It recently hired its first development director, whose position was funded by an anonymous $100,000 matching grant.

The Jewish Federations of North America (JFNA) will announce today that it is taking in its third outside entity in 18 months — this one focused on teen engagement, Shira Hutt, JFNA’s executive vice president, told eJewishPhilanthropy’s Helen Chernikoff. Effective at the end of the month, the staff of the Jewish Teen Engagement and Funder Collaborative, which operates in 10 communities, will become part of JFNA. A year ago, the philanthropy think tank Amplifier joined the federation umbrella organization, which has also taken in a grantmaking organization for Russian-speaking Jews.

Harnessing the platform: The collaborative’s programs, research and methodologies will become accessible to JFNA’s members — 146 federations and 300 smaller communities. What the collaborative has learned about building community through its work with teenagers can be applied to other demographics, Hutt said. “Jewish federations are in the business of lifting up Jewish life, and that work is always done in partnerships,” she said. “These opportunities create efficiencies and leverage the federation platform.”

Reaching teens: The Jim Joseph Foundation launched the collaborative in 2013, providing matching grants to its 10 communities — Atlanta, Baltimore, Boston, Chicago, Cincinnati, Denver/Boulder, Los Angeles, New York, San Diego and San Francisco. The goal was to spur local and national philanthropic support for innovative teen programming that aspires to engage youth in Jewish life and support their mental health. The organization developed evaluation methods and used its own programs to develop a national baseline of efficacy, which Sara Allen, the collaborative’s director, calls its “shared measures of success.”

There is no perfect science to rescuing desperate people fleeing a band of theocratic terrorists. That is at least one of the lessons learned from an operation last month to extract 167 Afghan nationals from the Taliban takeover of their country. Another is that trust can be built among strangers, even with people whose governments are sworn enemies and whose religious beliefs are supposedly at odds. Jewish Insider’s Ruth Marks Eglash reports on the rescue operation.

Dreams of freedom: This is a story of an international consortium of diplomats, Jewish philanthropists, an Israeli aid organization and a random set of individual Israelis, who suddenly found themselves working feverishly together to help an eclectic mix of progressive, educated and once hope-filled Afghanis escape the clutches of a repressive and murderous regime. To tell this dramatic tale, which spans dinner parties in Manhattan to safe houses in the Afghan province of Kunduz and features dispossessed ambassadors printing fake passports and former high school buddies-turned-gun-toting fanatics, as well as two special groups of young Muslim women refusing to give up on their dreams of freedom, I will begin on a private jet making its way from Tel Aviv to the Albanian capital, Tirana, last Thursday. (JI was a guest of Israeli-Canadian businessman and philanthropist Sylvan Adams.)

Lost everything: There is something very humbling about meeting refugees, people who have been forced to flee their homes, due to circumstances beyond their control. Most often, they must make the decision to leave at a moment’s notice, because staying could mean the difference between freedom and imprisonment — or even life and death. Without a thought, those fleeing their homes up and leave behind them the fullness of a life built and invested in over many years. “Moving to another country is hard, it is not home,” Mohammed Javed Khan, 27, told JI. “If I was single, I would have let the Taliban kill me, but I have a daughter and I didn’t want her to grow up without a father, so we left…. Thirty years of life and we lost everything in one day,” he sighed. “We had to leave everything behind.”

Waiting for the world: For now, the refugees remain in the Albanian resort, waiting for the world to decide their fate. Some would like to resettle in Europe, others have their sights set on Canada. One group of young men told me gleefully that their dream is to play for Canada’s national cricket team. “I think they could be with us for many years,” said Albanian Prime Minister Edi Rama, who met with Adams during our whirlwind visit to the country. “I don’t think we have done anything tremendous,” said Rama. “I know there aren’t too many countries in the world that have been willing to take in these people, but I think it should be the most natural thing in the world, especially for the countries who worked in Afghanistan. This is about human morality.”

“It’s no secret that 2020 was incredibly challenging. The cumulative impact of COVID-19, high unemployment, social turmoil, wildfires and other natural disasters have dramatically increased need everywhere. In response, funders are giving more,” write Jeffrey D. Haskell, Robyn Hullihan and Peter Handler of the Foundation Center in an opinion piece for eJewishPhilanthropy.

Direct giving: “Funders are also looking for ways to stretch their philanthropic dollars, and to expedite assistance to people in need. To accomplish both goals, they are increasingly making grants directly to individuals. Although private foundations typically grant to charities and other nonprofit organizations, it’s a little-known fact that they can also give directly to individuals and families in need. Foundations do not need to set up a separate nonprofit to make these grants, and they don’t need to seek prior approval from the IRS. Given these advantages as well as the exigencies of 2020 and 2021, private foundations are increasingly employing these grants to individuals.”

Rebalancing Relationships: The World Economic Services’s Mariam Assefa Fund, an advocacy and support organization for immigrants and refugees in North America, started its grantmaking just before the coronavirus pandemic and widespread racial protests, and decided to shift into a “trust-based philanthropy” mode in the early months of its existence, writes Monica Munn in a post on the Center for Effective Philanthropy’s website. The organization learned to let go of many of its ideas about how to operate, even to the point of stepping back, as when grantees told the group its involvement in an equity, diversity and inclusion capacity building initiative would inhibit authentic participation. “Our experiences over the last two years reinforced for us the principle that funding structures and agreements are not static. Rather, they are living processes and documents that need to be revisited and refined to ensure that they reflect our values and ongoing feedback from grantee partners,” Munn concludes. [CenterEffectivePhilanthropy]

Indigenous Investment: In Inside Philanthropy, Mike Scutari interviews Sherry Salway Black, who has worked for more than 40 years on Native American issues and is the chair of the First Peoples Fund and a member of the Oglala Lakota nation. While philanthropic support for Indigenous issues hovers at about 0.4% of total foundation funding, Black said she is encouraged by an increasing Native presence in philanthropy, and by MacKenzie Scott’s support for Indigenous organizations such as the First Peoples Fund, to which she gave $6 million. “From the social unrest of 2020 and growing attention to equity, diversity and inclusion in both the public and private sector, change is happening faster, opportunities and doors are opening in more places, and more resources are available for social justice,” Black said. “Will this continue? It should and it must.” [InsidePhilanthropy]

Going Greener: The Minneapolis-based McKnight Foundation has pledged to shift investments in its $3 billion portfolio to companies committed to reducing greenhouse gas emissions, reports Neal St. Anthony in the Minnesota Star-Tribune. More than 40% of the portfolio was already dedicated to investments in technology, software and services that reduce economic dependence on carbon, but as the United Nations Climate Change Conference in Scotland gets underway, the foundation has said that it needs to do more — and that it has not and will not sacrifice financial performance. “We have been on the path to decarbonizing our portfolio since 2014,” said Elizabeth McGeveran, McKnight’s investment director. “We’re heading toward a final destination. And we invite institutional portfolio managers to think about this.” [StarTribune]

The Conservative Movement’s Rabbinical Assembly published a list of rabbis who have been expelled or suspended over allegations of misconduct… Swipe Out Hunger acquired the College and University Food Bank Alliance, a professional organization of campuses focused on alleviating food insecurity among college students… Tiffany Tatumwas appointed associate dean of the Jack H. Skirball Campus at Hebrew Union College-Jewish Institute of Religion in Los Angeles… Israel’s President Isaac Herzog announced the establishment of the Israeli Climate Forum, which will lead discussions about the climate crisis and Israel’s role in the fight against it… Gothenburg University and the Parkes Institute of Southampton University have issued a call for papers to be presented at “A Jewish Europe? Virtual and Real-Life Spaces in the 21st Century” to be held in Gothenburg, Sweden, May 3-5, 2022, pandemic conditions permitting… The Jewish Museum of Maryland reopened after closing nine months ago due to the COVID-19 pandemic… Candid launched a U.S. Social Sector Dashboard, a free resource designed to “demystify” the sector by providing data on its scope, constraints and potential… With a $43 million commitment from Bloomberg Philanthropies, Johns Hopkins University will establish the Bloomberg Center for Public Innovation…

More than a month after Hurricane Ida hit the U.S., the Israel-based organization SmartAID continues to provide tech solutions for communities in Louisiana affected by the storm.

Your Daily Phil: New study on philanthropy exclusive to women and girls in Israel

Your Daily Phil: A young philanthropist on ‘risk capital’ + JDC’s Entwine gears up for service trips

Your Daily Phil: How foundations return to the office + The key to engaging alumni 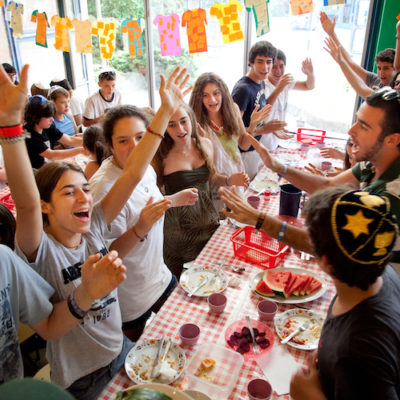