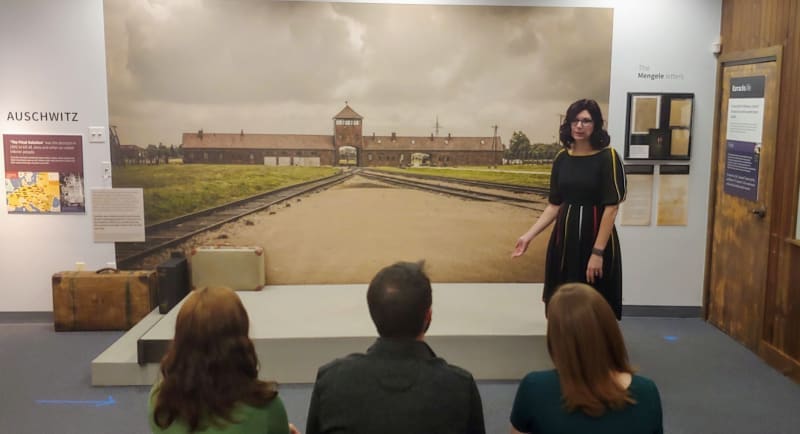 Gratz College has named human rights attorney Irwin Cotler, chairman of the Raoul Wallenberg Centre for Human Rights, as its first Isaacman Distinguished Visiting Professor in Holocaust and Genocide Studies, a signal that the growth strategy the college is developing will emphasize its genocide education programs and an associated academic center.

“The first phase is to get the center off the ground, and Irwin offers that prestige,” Zev Eleff, Gratz’s new president, told eJewishPhilanthropy. “It’s also where we want to be programmatically.”

Gratz opened its Center for Holocaust Studies and Human Rights in February under the leadership of Ruth Sandberg, a professor of Jewish and Christian studies at the college who has taught there since 1985. The center will enable students in three Gratz programs — Holocaust and genocide studies, human rights and interfaith leadership — to cross-register classes, Sandberg said.

The center will also aim to raise awareness of the Holocaust and other genocides, and to engage directly with the broader community. Cotler, a human rights attorney and a former minister of justice and attorney general of Canada, will offer two lectures during his appointment, which will span the 2021-2022 academic year. The center has held its first public program, a presentation by the American Jewish Committee on “The State of Antisemitism in America 2020.”

“Because Dr. Cotler is such a huge figure in this world, his appointment elevates awareness of the center,” said Naomi Housman, Gratz’s director of institutional advancement, who is working with Eleff to develop the center’s fundraising strategy. Chancellor Paul Finkelman, Eleff’s predecessor, was primarily responsible for bringing Cotler to Gratz.

Founded in 1895 as a teachers’ college of Jewish education from the estate of the Gratz family, which settled in the United States before the Revolutionary War, Gratz is the oldest Jewish institution of higher education that’s not affiliated with a religious denomination. The school, near Philadelphia, focused on meeting the needs of local Jewish educators in its first decades and during the proliferation of suburban synagogues during the 1960s and 1970s, said Kathy Elias, an alumna of the college and its board chair. In the early 2000s, it became one of the first providers of online education, an area in which the college maintains a significant competitive advantage, said Avinoam Patt, a Judaic studies chair at the University of Connecticut who has also worked as a scholar at the United States Holocaust Memorial Museum in Washington, D.C.

Soon after, the school’s administrators began to notice a growing number of non-Jewish students who were pursuing their master’s degrees in general education there, Elias said. Today, about half of the student population of 300 is not Jewish. Gratz’ masters program in education remains its biggest program, but the combination masters-doctorate program in Holocaust and genocide studies has significant growth potential, Eleff said.

The program focuses on Holocaust education training for K-12 teachers in addition to community college instructors, museum educators and descendants of victims who speak in the community, Housman said.

Courses include “History of Antisemitism,” “Nazi Germany and Corporate Collaboration” and “Teaching the Holocaust.”

The need for such training is growing in large part because at least 19 states now require that their public school systems teach the Holocaust. However, many states do not provide teachers with the training they need to do so effectively, Patt said.

“It’s very unfair to teachers,” Patt said, noting that while he helped his home state of Connecticut craft such a mandate, he criticizes the state for not funding it adequately. New Jersey, he said, is an example of a state that does a better job in its funding. “The responsibility then falls to nonprofits and higher education, like the Gratz program.”

Facing History and Ourselves and Echoes & Reflections are the two biggest nonprofits that provide curriculum and professional development to K-12 teachers about the Holocaust and other genocides.

“I’d say a program like Facing History can serve as an effective on-the-ground complement to the Gratz program, rather than a substitute for it,” said Jonathan Krasner, a professor of Jewish education research at Brandeis University.

Echoes & Reflections is a partnership of the Anti-Defamation League, the USC Shoah Foundation and Israel’s Yad Vashem museum, and it also already has a relationship with Gratz; the nonprofit has worked with the college more than 20 times since its founding in 2005, said Jesse Tannetta, the operations and outreach manager for Echoes & Reflections who is a current Ph.D. student at Gratz in the Holocaust and Genocide Studies program. Gratz analyzes Echoes & Reflections’ materials in some of its courses, Tannetta said.

Krasner said he sees Gratz’s move into providing more Holocaust and genocide education as part of a trend. Hebrew colleges such as Gratz and Hebrew College in Boston, have needed to reinvent themselves, because Jewish studies programs on secular university campuses and pluralistic educational institutions, like Mechon Hadar and the Pardes Institute of Jewish Studies in Jerusalem, have increasingly provided training for aspiring Jewish educators.

“It’s a smart move, because Gratz would be building on an already-existing strength,” Krasner said.

In spring 2022, the college will begin offering a Holocaust education credential to museum docents, Eleff said.

That course is an early example of a bigger initiative to offer what Eleff calls “stackable” courses, or “micro-credentials” that can be pursued as certificates and also combined into degrees.