While they oppose fossil fuels, the groups see natural gas as a lesser evil and hope the agreement will lead to more progress. 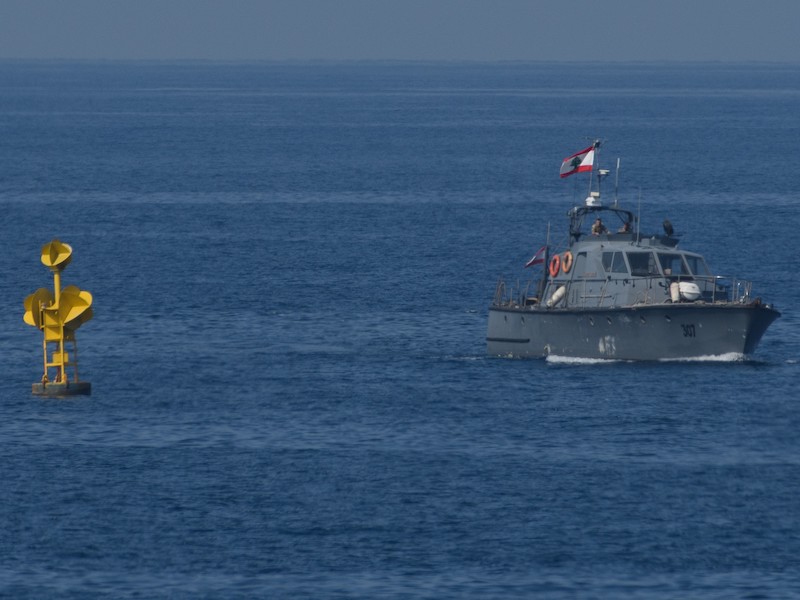 A Lebanese navy patrol boat next to a buoy marking the maritime border between Lebanon and Israel in the Mediterranean Sea on Oct. 27, 2022.

When Israel and Lebanon reached a historic agreement regarding their maritime border last week to open up drilling in two natural gas fields in the Mediterranean that were previously in disputed territory, the deal had unexpected supporters: two Israeli environmental groups.

In most places around the world, environmental activists are usually quick to condemn any new maritime gas announcements. But Israeli environmental groups that prioritize two of the agreements’ areas of focus, maritime issues and regional cooperation, applauded the deal, focusing on the opportunities that the agreement could inspire in other long-running conflicts in the region.

“We want our electricity to come from renewable sources, but right now we’re in a time of transition,” explained Youval Arbel, the deputy director of Zalul, a nonprofit environmental group focused on seas and streams. “When you see what’s going on [economically] in Lebanon, you can understand the importance of what it would mean for them if they discover gas.”

The deal demarcates a maritime border between the two states, which have historically been enemies and have fought several wars. Each country will have exclusive oil and gas exploration on its side of the border, and will split profits from a field that sits astride the line. It was signed by Israeli Prime Minister Yair Lapid last week, though Benjamin Netanyahu, the likely next prime minister, has said he opposes the agreement — leaving its fate uncertain.

Arbel said he is not worried that Netanyahu’s likely victory in this week’s elections will imperil the deal, since Netanyahu could have delayed the signing of the deal while part of the parliamentary opposition, and chose not to. But he is worried a Netanyahu government could spell problems for other environmental issues.

Zalul, which has an annual budget of around $1 million, does research and advocacy focusing on Israel’s streams and seas, so it’s intimately familiar with the danger of pollution in both streams and coastlines. The organization is not opposed to drilling for natural gas in deep sea fields that have already been discovered, such as Israel’s Leviathan or Tamar fields, or the explorations that will take place in Qana and Karish fields, which were at the center of last week’s deal — but does not want the drilling to go further than that.

“We don’t need to open new gas fields beyond what’s already been developed,” Arbel said. He called on European countries, the main importers of gas from the region, to stick to their renewable energy goals for 2030, and not proceed with plans to lay a gas pipeline from Europe to the eastern Mediterranean.

For EcoPeace Middle East, an Israeli-Palestinian-Jordanian environmental group that works on cross-border initiatives, the deal is “a paradigm shift of diplomacy” that could usher in a new strategy for peace agreements in the region, Gidon Bromberg, the group’s Israeli co-director, told eJP, even though he said, “We understand that we need to stop burning fossil fuel, full stop.”

Previously, he said, there was an expectation that negotiations would solve all the problems all at once, achieving full recognition and peace, which was the format of Israel’s peace agreements with Jordan and Egypt in the 20th century, and is the principle that guided the Abraham Accords, the recent Israeli normalization deals with the UAE, Bahrain, Morocco and Sudan.

“However, it’s not the only model, and what the Lebanon-Israel agreement on the maritime border shows us is that two countries that don’t have a peace treaty, that haven’t been able to agree on all the issues that divide them, were still willing to agree on one particular issue of mutual concern they recognized was so important to both of them,” Bromberg said. “Even though a full [peace] agreement was not reached, perhaps this agreement on one issue will help build confidence and trust, will help reality on the ground, and in the future could lead to an expansion of issues to reach a full agreement.”

The single-issue approach could provide a good framework for solving some of the “lower hanging fruit” in the Israeli-Palestinian issue, Bromberg believes. The last serious negotiations between Israel and the Palestinians were nearly a decade ago, and ended without an agreement. The fundamental tensions surrounding  major issues like the status of Jerusalem, Palestinian refugees, Jewish settlements and permanent borders haven’t meaningfully changed.

But Bromberg noted that one major issue between Israelis and Palestinians is very different in 2022 than it was in 1993, when Israel and the Palestine Liberation Organization signed the Oslo Accords: water.

Back in 1993, water was a “zero-sum game,” Bromberg said. There was a limited amount of natural water from local mountain and coastal aquifers. Any agreement that increased water allotment to the Palestinians or Jordanians would mean a decrease in the water available to Israel. But with Israeli innovations in water recycling and desalination, there’s no longer a ceiling on the total amount of water. Israel recycles more than 90% of wastewater for its agriculture and industry, and more than 70% of domestic drinking water is desalinated.

“The rationale of why water was hard to solve no longer exists,” said Bromberg. And the issue of water access has become more critical, as the region has experienced 15 years of drought over the past 20 years, meaning the underground aquifers are not replenished.“There’s an urgency in water unlike any other issue that’s due to climate change,” said Bromberg.

Although Arbel supports the agreement with Lebanon, he still has concerns — namely, that Israel is unprepared to deal with the pollution from a possible spill due to an accident or terrorism.

“If we get a huge spill in the sea, the spill will propagate and drift into the coast, and whatever this oil meets, it will kill,” he said.

Two years ago, many sea animals died, and beaches along Israel’s entire coastline were shuttered, after approximately 1,000 tons of tar washed ashore. The Nature and Parks Authority called the spill “one of the most serious ecological disasters” in Israeli history. Thousands of volunteers rushed to help clean up, and some were hospitalized from breathing toxic fumes during the cleanup. Tar continued to wash ashore months afterward.

There is less concern about damage from the drilling and exploration itself, Arbel said, because there are international standards for marine drilling that minimize impact on the marine environment by treating and cleaning the by-products that are created during the drilling process.

“If there’s a terror attack or an accident, they can easily spill as much again,” said Arbel.  The more drilling that happens, the higher the probability of an accident, and any spill could easily drift to Israel’s shore.

In 2008, the cabinet of then-Israeli Prime Minister Ehud Olmert proposed a National Plan for Preparedness and Response to Marine Oil Pollution Incidents, but the plan was never funded or legislated into law. Last year, Israel’s Environmental Protection Ministry put forward a new draft bill to address the risk of oil spills.

Today, Israel has just two boats equipped to deal with oil spills – one in the Red Sea, and one in the Mediterranean Sea. Arbel estimates that implementing the preparedness plan would cost around $28 million.

Both Israel and Lebanon ratified the European Union’s Barcelona Convention for the Protection of the Marine Environment and the Coastal Region of the Mediterranean in 1995. Israel has more robust marine protection agreements with Jordan, Egypt and Cyprus to deal with possible spills, which includes sharing rescue resources and information to track a spill. That level of cooperation is needed with Lebanon as well, said Arbel.

One thing Bromberg has learned about cooperation between uneasy neighbors is the importance of patience. EcoPeace is the only environmental organization working on trilateral issues in Israel, Jordan and the Palestinian territories, he said, and it gets a third of its funding each from private donations, foundations and foreign government grants. Its annual budget is between $2 million and $4 million.

“Cross-border cooperation is not a one-year issue,” he said. Much of the group’s  major funding is allocated in five-year cycles, a pace Bromberg said is essential for helping his group plan major cross-border initiatives, like their Good Water Neighbors project linking Israeli, Palestinian and Jordanian mayors of towns along the Jordan River.

Bromberg said the Lebanon agreement provides an example of the importance of creative leadership and identifying issues that are clearly a win-win for both sides. It’s also an opportunity for countries suffering from the effects of climate change to work together to find a solution that will be mutually beneficial.

“Cooperation to meet that climate challenge brings resilience,” he said. “This is the type of leadership we now need to see among Israelis and Palestinians.”