Who by fire? Who by flood? How Will You Vote?

Every two years my fall calendar is crammed with not only Jewish festivals but elections too. Both of these, if you think about it, involve a series of rituals and meaningful exchanges after which, we hope, we will be sealed in the Book of Life for another year! We reflect, we make amends, we commit and recommit, we celebrate, all in the hopes of a good – a better – year ahead.

It was during the second phone banking session for Chutzpah 2022 that I spoke to a disabled single mom from Pennsylvania. Though she had listed the environment as one of her voting priorities, looking after her two young children and managing her disability meant that voting on Election Day felt like an impossibility — even in a state where every ballot matters this November. The gratitude in her voice after I told her that she had the right to request an absentee ballot, and explained how to do so, was a reminder of why I, my Dayenu colleagues, and hundreds of Jewish volunteers do this work of non-partisan voter outreach every election.

Every two years my fall calendar is crammed with not only Jewish festivals but elections too. Both of these, if you think about it, involve a series of rituals and meaningful exchanges after which, we hope, we will be sealed in the Book of Life for another year. We reflect, we make amends, we commit and recommit, we celebrate, all in the hopes of a good – a better – year ahead. 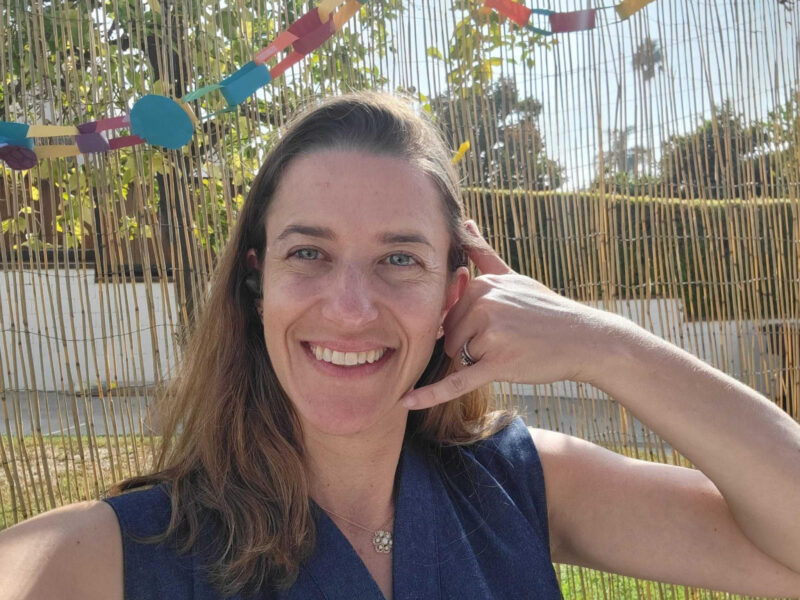 That’s why dozens of volunteers from communities across the country spend the days after Yom Kippur calling concerned but infrequent Jewish and climate voters to encourage them to cast their ballots this year. And during Sukkot, we spent an evening calling voters while peeking through the branches of s’chach on the roof of our sukkah, at the twinkling stars – contemplating Creation while encouraging climate-concerned people to make a voting plan.

And their votes are crucial. Even in the 2020 presidential election there were more than 8 million environmentalists who were eligible, but didn’t vote. And even more sat out the 2018 midterms. In the state of Pennsylvania alone, there are more than 150,000 climate-concerned voters who didn’t vote in the 2018 midterms who, data analysis suggests, are probably Jewish.

I didn’t realize any of that until we partnered with the Environmental Voter Project, an organization which crunches the data to build lists of climate-concerned voters who sometimes sit out elections, and which is helping Dayenu maximize the impact of our work this electoral cycle. Sometimes it can take fresh, analytical eyes from outside to remind us how much impact our community can have.

Even in the Jewish world there is a lot of work to do. The myth of the Jewish voter holds that all Jews come out to vote at every election. But, while American Jews typically do indeed have an excellent voting rate of nearly 80% in presidential election years, that figure drops for the midterms just as it does in the wider population. So, if studies done in California are representative of wider patterns, the proportion of Jews that vote is closer to 71% in midterm general elections compared to 78% in presidential elections. Increasing Jewish voter participation in midterm elections by even 1 or 2% could mean a decisive tens or hundreds of thousands of votes cast. That’s why we’re talking with voters during 16 virtual phone banks to states around the country, and knocking on voters’ doors in Wisconsin and Georgia.

With Jewish voters nationwide regularly listing the climate as one of their top issues, it’s not surprising that there are so many climate-concerned Jews in Pennsylvania. After all, Pennsylvania Jews, like the rest of us, are worried about future generations, and want to ensure we can live l’dor v’dor, from generation to generation.

I choose to do this work with Jewish communities, deeply rooted in faith and compelled to action by our values, because we need to work hand in hand, arm in arm to solve this challenge. Our fate is not yet written in this upcoming election. Just as every prayer on Yom Kippur could be the one to tip the scales of judgment, every vote we cast on election day could tip the scales toward climate action, toward life. This is the moment to join us and choose life, we have no time to lose.

Vicki Kaplan is the director of organizing for Dayenu: A Jewish Call to Climate Action