I was fortunate to work at a camp that, on its best days, showed our campers the world as it could be. Certainly we erred–acknowledging and learning from missteps is built into Harlam’s processes for accountability and growth. When Camp Harlam says it is doing its best, I have good reasons, beyond my own desire for a place I love to be virtuous, to trust and believe them.

A question I used to ask my coworkers at URJ Camp Harlam: Is the purpose of camp to show the campers a world as it could be, or to prepare them for the world as it is? One despicable answer seems to have been unfolding at Camp Ramah Berkshires over the past few years.

The horrible events described in reporting about a lawsuit against Camp Ramah Berkshires are bone-chilling. An incident of assault was reported up the chain and the director, allegedly, did his level best to stop the report from leaving his desk. Those of us who attribute any portion of our growth as human beings to a Jewish summer camp should be offended by Director-Rabbi Ethan Linden’s performative concern for updating the camp’s policies and procedures around sexual abuse in light of his handling of real world events. Two object lessons come to mind: 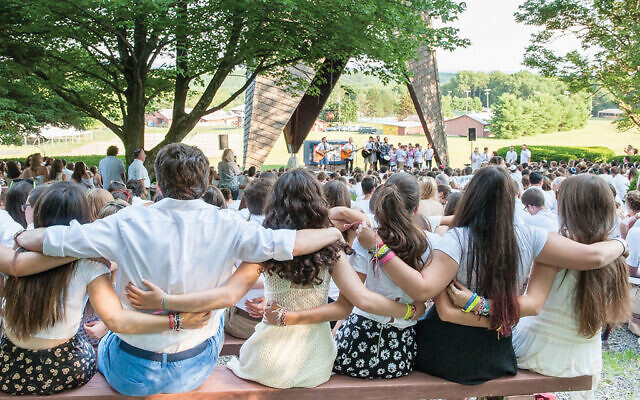 I supervised teenage campers at URJ Camp Harlam for four summers between 2015-2018. I believe that if my camp’s leadership had learned of a similar alleged assault, it would have been handled with the emotional, physical, psychological and moral gravity demanded in such moments. This belief is based on my experience in working with Harlam’s Camper Care team, and the professionalism and compassion with which they approached mental health struggles, bullying incidents, family crises and other scenarios which demanded profound sensitivity. This is my anecdotal experience, but I believe it is also reflected in the numerous grants Harlam’s Camper Care program has been awarded over recent years.

As another summer approaches, URJ camp professionals are funneling their efforts into operating their institutions at the highest level in times of deep and warranted societal unrest. Of course we should celebrate this good work, but not without acknowledging how much remains–at every level, particularly the uppermost.

It must be said: that Ramah Berkshires episode unfolded within a different Jewish youth movement should not allow us Reform Jews to gloss over the unfinished work within our own community. Feeling encouraged now because we do not face a lawsuit in federal court would be a low bar indeed.

I now serve on the leadership team of ACT, an organizing effort of current and former URJ professional and seasonal employees leveraging our power to demand accountable, transparent and community-focused action to address our movement’s own problems with sexual misconduct and abuse.

Simply put, I do not believe my camp’s leadership benefits from the same care and support from those they report to that they provided me in my seasonal role.

I have read too many carefully parsed statements loaded with the legal doublespeak necessary to avoid litigation and thus render any claim of moral responsibility resoundingly hollow. (This latter point has boiled my blood particularly over the past week as we have witnessed the extent to which legal sophistry can be marshaled for purposes of cruelty and oppression).

I was fortunate to work at a camp that, on its best days, showed our campers the world as it could be. Certainly we erred–acknowledging and learning from missteps is built into Harlam’s processes for accountability and growth. When Camp Harlam says it is doing its best, I have good reasons, beyond my own desire for a place I love to be virtuous, to trust and believe them.

On the other hand, I have been provided with very little reason–beyond a similar desire–to believe that the URJ’s leadership would be able to intervene as necessary if one of our summer camps found itself in a position of moral destitution and failed leadership similar to the case at Ramah Berkshires. That the URJ’s failures are not the most recent or most apparently egregious in the field of Jewish camping means little to the task ahead–not least because a narrow focus on our camps means emphasizing our area of greatest success when we are still learning the extent of the remaining work; I picture mezuzot mounted on the office doors of URJ’s HR department, and my face burns at the hypocrisy while I feel what the Torah describes as a hardening in my heart.

Now is not the time to note with pride the steps we are already taking, but to cease with the pronouncing and get to work.

Perhaps that is too much to expect of a movement that fails to provide its own professional staff with the benefits and social support we advocate for all employees on the Federal level through the work of the Religious Action Center. Cognitive dissonances of this nature, in my experience, jangle through organizational cultures that are far more comfortable with the language of values-driven work than the work itself.

There must always be a vessel for a robust and progressive American Judaism; now is the time for the URJ to demonstrate it is up to the task by rooting out its own entrenched injustices.

This is an edited version of Adam’s original post that appeared on his personal blog.