‘Trauma on its way’: Jewish community braces for a rising death toll

Chabad, federation, Jewish Community Services and JCCs are working together, and waiting 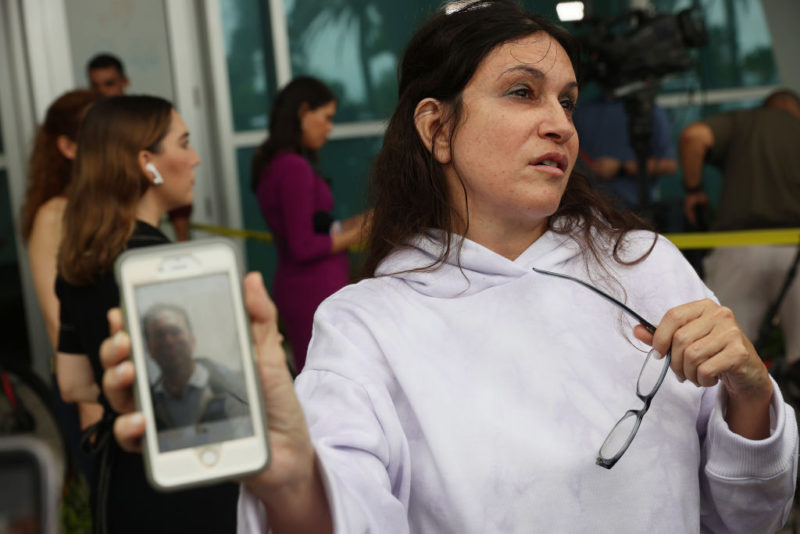 SURFSIDE, FLORIDA - JUNE 24: Soriya Cohen shows a picture of her husband, Brad Cohen, who she said is missing after the partial collapse of the 12-story condo tower that he was in on June 24, 2021 in Surfside, Florida. It is unknown at this time how many people were injured as search-and-rescue effort continues with rescue crews from across Miami-Dade and Broward counties. (Photo by Joe Raedle/Getty Images)

The grief-stricken Jewish community in Miami has scrambled to respond to the collapse of a  condo tower in the town of Surfside, which has a sizable Jewish population. For days the community held out hope that search and rescue efforts would find survivors, but is beginning to acknowledge the probability that most or all of the more than 150 people still buried in the rubble of the Champlain Towers did not survive, Rabbi Sholom Lipskar told eJewishPhilanthropy.

“They’re starting to extract more people. Unfortunately, not alive,” said Lipskar, whose congregation, The Shul, is located in Bal Harbour, about a mile north of Surfside’s Champlain Towers South, which fell early Thursday morning. “There’s a lot of trauma on its way.”

As of Monday morning, the official death toll was still nine, with five bodies identified.

Surfside is one of four towns that make up the north end of Miami Beach, which is more than a third Jewish, according to the JTA. The North Beach community, which has about 5,000 Jews, is about 30% Hispanic and 13% Sephardic.

Lipskar estimated that about a quarter of the missing victims are likely Jewish, and Paul Frishman, CEO of the Miami Beach JCC, said 15 JCC families have a member who is missing.

The Greater Miami Jewish Federation has opened an emergency assistance fund for survivors who escaped the collapse, the families of victims and those who lived in the tower but were not at home when it fell.

The Jewish Community Services of South Florida (JCS), the local Jewish human service agency, is cooperating with elected officials and law enforcement to assess the needs as they evolve, Jacob Solomon, the federation’s CEO, said in a statement: “We anticipate significant demand for financial assistance, trauma counseling, spiritual care, housing assistance and support for funerals and burials.” JCS is providing crisis counseling and housing assistance, and a federation program is helping to organize chaplain services near the site, at the Surfside Community Center.

A congregation of about 700 families that offers nine daily prayer services and is known internationally for its warm welcome to travelers, The Shul is functioning as the center of the Jewish relief effort, said Frishman. The JCC sits two miles south of the fallen building, one of three in the Champlain Towers complex. The Shul serves as the collection point for supplies donated by the community, such as phone chargers, socks, blankets and snacks, and is providing space for emergency workers and grief counselors to take breaks.

Lipskar learned about the collapse when his granddaughter texted him at 2:30 a.m. on Thursday morning and asked him if he knew what had happened in Surfside. He and his rabbinical staff have been at the site, the synagogue or in the hotels where the families of the missing are being lodged since sunrise hours later. They are also supporting the Chesed Society, the community organization that prepares the dead for burial, which needs to gather as much of the remains as possible in order to bury a body according to Jewish law.

“We just shower them with kindness and empathy,” he said of the stricken families. “They know that someone is near them who cares, because there is no answer to this problem, it’s embedded in the soul. So the fact that we are just there, being with them, that helps.”

On Shabbat, Lipskar shuttled back and forth between The Shul and the disaster zone. On Sunday afternoon, The Shul held a service attended by  more than 500 people, including Israel’s Minister of Diaspora Affairs Nachman Shai, who flew in to lend support along with a team of Israel Defense Forces search and rescue experts.

“There’s a small sense of hope,” Frishman acknowledged, “but that diminishes as every hour goes by.”