The upscale building will be located in the Pico-Robertson neighborhood, known for Jewish life 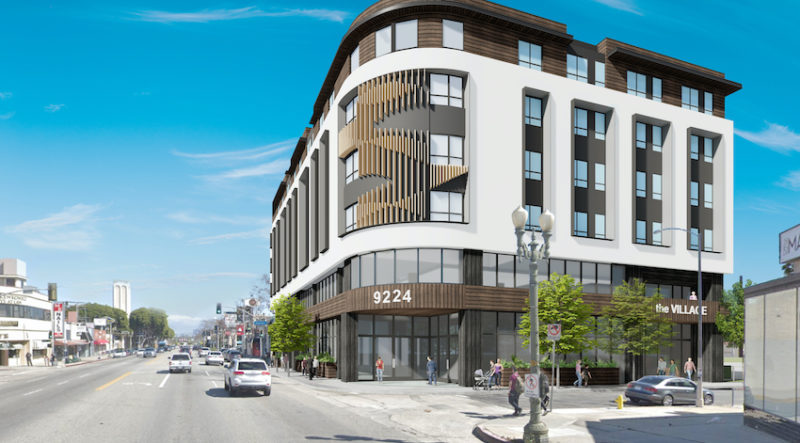 An upscale new building designed for adults with autism or related disabilities is scheduled to break ground later this year in Los Angeles’ coveted Pico-Robertson area, known for its thriving Jewish community.

The 64-unit building, called “The Village,” is a joint effort by ETTA, a charity that serves adults with physical and intellectual disabilities, and Cornerstone, a nonprofit housing developer. It’s an upscale project, conceived as a model boasting such strong appeal and smart execution that its founders hope enthusiasts will be eager to replicate it.

“It’s a flagship type of building, to inspire and show what’s possible in a meaningful way,” said Michael Held, executive director and founder of ETTA, established in the city in 1993 to provide services such as housing, case management and job training to adults with disabilities.

While The Village will offer up to 15 units to residents who don’t have intellectual disabilities who would like to be a part of the community, its mission is to provide a desirable home for people with autism or related disabilities who can live independently, but who struggle with social challenges like making friends and obtaining and keeping a job, Held said.

“There are not enough housing or job opportunities for people who are neurodiverse or have other disabilities,” said Jennifer Laszlo Mizrahi, co-founder and president of Respectability, an advocacy organization for people with disabilities. “More options is a good thing.”

Located at 9224 West Pico Boulevard between Cardiff Avenue and Glenville Drive, the Village is also intended to function as a neighborhood hub. The facility will host community activities, and a retailer who has committed to hire The Village’s residents will occupy the ground floor. Held couldn’t disclose the name of the retailer, as the deal has not yet been finalized.

“We see this as a deep dive into the soul of a neighborhood,” Held said. “It changes the feeling in a community where there is a full and active community of people who are diverse.”

The building will also be near a bus stop, which is important because many people with disabilities don’t drive, Mizrahi said.

The six-floor building will feature communal spaces on the second floor, including a café funded by Alan and Barbara Gindi in memory of Barbara’s parents, Alan Gindi said. His mother-in-law worked in a school for children with disabilities, and the mugs will be decorated with her pet sayings.

“My wife and I do a lot of charitable giving, and we need to find partners,” Gindi said. “It’s hard to find great projects. It’s fortunate for us that we have this opportunity.”

In addition to rent, which will range from $2,000 to $3,500, tenants will pay a community membership fee that includes the option of a meal plan in a kosher kitchen, although each unit also has its own kitchen.

The state of California also gives financial support to this population, and ETTA will help residents of The Village maximize their subsidy. Some units will be reserved for low-income tenants, but the vision for the project and the high cost of real estate in that neighborhood requires market-rate rental revenue, Held said.

The lack of housing availability in California results in about six in 10 adults with this type of disability living with their families past the age of 35, according to an article published earlier this month in the Jewish Journal, a Los Angeles publication, which cited the California State Council on Developmental Disabilities.

ETTA has raised $11.4 million of its $18 million capital campaign. Held said the COVID-19 pandemic made fundraising difficult due to the inability to see donors in person, but he believes the effort will achieve its goal.

Donors include Kam and Lily Babaoff, Nancy and Jonathan Glaser, Judah and Astrid Hertz, Aviva and Scott Krieger, Peter and Andrea Roth, Hendel and Eric Schwartz, Kellie and Jeffrey Singer, the Caplow Family Foundation and the George and Irina Schaeffer Foundation, according to the Jewish Journal.

Reuben Rotman, CEO of the Network of Jewish Human Services Agencies (NJHSA), said the Village model is an innovative response to the housing challenge for people with disabilities due to its emphasis on community integration and philanthropic support.

“Nationally, NJHSA member agencies often struggle to assist families that are looking for housing models that provide support, while also fostering community integration,” he said. “With local philanthropic support, the Village model has the potential to change the narrative.”

Demand for the apartments already exceeds supply, and a committee will be tasked with selecting the tenants.

“It will be a big challenge,” Held said.