Throughout the 75-year history of the Cantors Assembly, we have no formal history of engaging with political Israel affairs as an organization. As with so many aspects of the cantorate today, the shape of our role in the Jewish landscape is evolving. We are full clergy, full stop. Israel is a source of pride, strength, and inspiration for CA members, and our current leadership was more driven than ever to be involved in Israel conversations.

Last Monday, eJewishPhilanthropy featured an opinion piece by Idan Roll, Israel’s deputy minister of foreign affairs. Roll suggested that we are due for a paradigm shift in the realm of Israel-Diaspora relations. He wrote:

“A chief challenge that the Jewish Diaspora faces today is how to connect younger generations to their Jewish identity and Israel. I argue that these two are interconnected. A strong Jewish identity leads to a natural affinity toward Israel, and a deep connection to Israel creates a link to our people’s history and tradition and our current state of affairs.” 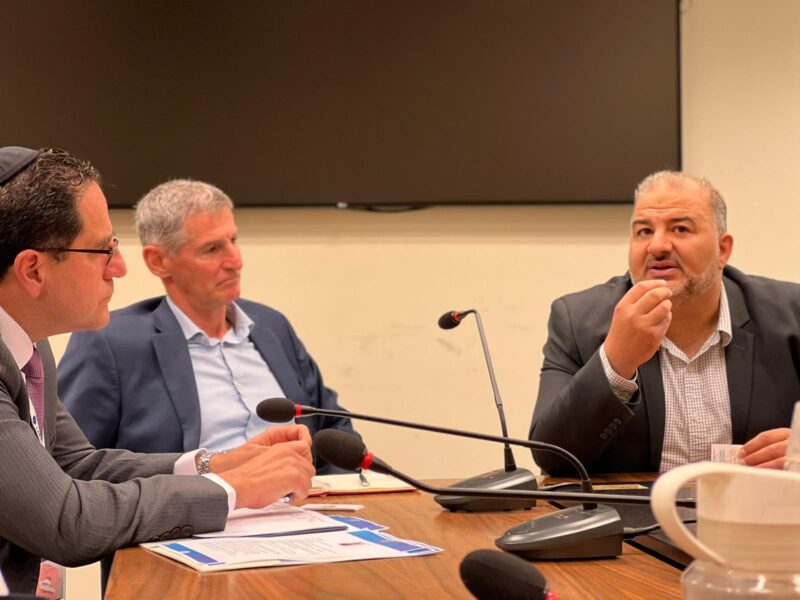 Courtesy of the Cantor's Assembly

That same week, I traveled with a delegation of 11 leaders from the Cantors Assembly (CA) to Israel, where our docket included a meeting with Deputy Minister Roll. This mission itself, with a spotlight on cantors, represented a paradigm shift that we believe will be key to alliances between the two largest Jewish populaces in the world.

When You Don’t Have a Seat at the Table, Pull Up a Chair

Throughout the 75-year history of the Cantors Assembly, we have no formal history as an organization of engaging with political affairs in Israel as an organization. As with so many aspects of the cantorate today, the shape of our role in the Jewish landscape is evolving. We are full clergy, full stop. Our membership comprises 600 plus cantors, identifying as male and female, impacting thousands upon thousands of Jewish lives through ritual and educational engagement. Israel is a source of pride, strength and inspiration for CA members, and our current leadership was more driven than ever to be involved in Israel conversations.

Close to a year ago, our leadership reached out to the leadership of Masorti Israel and Mercaz Olami to ask how and when we, as cantors, might visit as a delegation of passionate, educated Zionists. Our primary goals were education and solidarity, demonstrating our continued commitment to the thriving of the State of Israel in all its diversity. The Israeli movement partners met our enthusiasm with their own high energy embrace. They built us a full docket that took us from the Jerusalem mayor’s office to the shuk; from the Kotel family platform to Har Herzl; from the Knesset to the Fuchsberg Center; from Machon Shechter to a North African cultural center – all within a span of four days.

“We [were] here to build bridges between American and Israeli Jews and to affirm that there are a number of valid ways to live meaningful Jewish lives,” said Hazzan Luis Cattan of Westport, Connecticut, current president of the assembly. “We are excited to work with our brothers and sisters in the Masorti movement and affirm the unique and powerful ways in which we cantors can make a difference and sometimes remove obstacles.”

When piloting this program, the Cantors Assembly considered what might be their criteria for building the delegation. One factor was language: Cattan requested that we stretch to do all our business in Hebrew. There are doors that open wider when we yield to the native language of the environment we enter, particularly in the realm of politics.

From the start of our interactions on Monday, we conducted our meetings in Hebrew. Whether we were listening to Tammy Gottlieb, vice president of communications for the Masorti Movement, Israel, describe the retzef yahadut (spectrum of Judaism); or whether huddled in conversation with MK Mansour Abbas of the Ra’am Islamic party, Hebrew was a device for egalitarian conversation, yielding our own eloquence for the sake of the comfort and freedom of expression for our hosts. We therefore experienced a version of each meeting without the gloss of translation, raw and challenging, and utterly worth the effort.

Singing is Just the Beginning

Did we sing together on this trip? You might have thought that would be the purpose of a cantors’ trip to Israel, but performance and song are only small slices of our profession. The success of this delegation and the bridges we have begun to build come from tapping into our skills and toolboxes as pastoral caregivers, as educators and as community organizers. With the ministry of foreign affairs, we dreamed about organizing community trips in time for Yom HaZikaron next year. We planned pedagogic exchanges with newfound colleagues at the Ashira program within Machon Schechter. And we nodded in understanding as Father Alberto Pari spoke of the tremendous challenges he faces as director of interfaith music programs in the heart of Jerusalem.

When we did sing, it was a spontaneous pause at Theodore Herzl’s grave to chant El Male Rachamim. Again, an unplanned moment of song arose when MK Alon Tal, arms outstretched for a group picture, broke into a congregational rendition of Etz Chayim Hi. The songs of Israel reentered our hearts, inspiring us to return.

Next Year, And the next, in Jerusalem

If what we have set in motion by completing our initial Cantors Assembly mission is a precedent for an annual trip in support of our Masorti and Mercaz partners in Israel, dayyeinu – it would be enough. We hope, though, that we have done so much more.

The trip was short. The work is long. And we know that we are neither alone in the work of refining the dream of Israel, nor are we free from engaging with it. Each of us who attended this mission is individually reinvigorated, committed to building a World Zionist Congress in 2025 that mirrors the pluralistic Israel that is growing every day. We are the naturally positioned shepherds to do the work that Deputy Minister Roll sees as our shared challenge: to connect younger generations to their Jewish identity and Israel.

Cantor Rabbi Hillary Chorny is the cantor at Temple Beth Am in Los Angeles, California, where she lives with her husband and their two kids, Ella and Yossi. She is an avid writer, and she proudly serves as an officer of the Cantors Assembly, on the advisory board of the Jewish Sacred Music Foundation, and as an instructor at the Ziegler School of Rabbinic Studies.