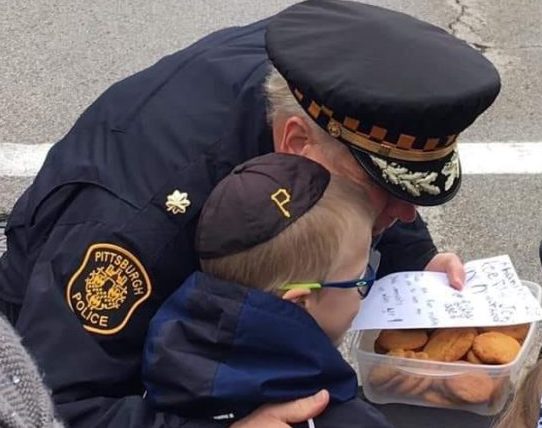 In the early days of the pandemic, the Jewish community’s official safety initiative — the Secure Community Network (SCN) — formed the Resumption of Operations and Organizational Reopening Working Group to create guidance about how to open again, because nobody knew how long the newly introduced lockdowns would last. Now that vaccines are becoming increasingly available and society broadly is starting to ponder a restart of public life, SCN will release a new version next month as the organization works to assess security needs in the Jewish community’s physical spaces during this time of rapid change.

Created in 2004, SCN operated for most of its history as a small, independent organization sponsored by Jewish Federations of North America (JFNA) and the Conference of Presidents of Major American Jewish Organizations. Security expert Paul Goldenberg was hired, and he ran the group and advised Jewish organizations on safety until his retirement in 2017, when Masters, who had been an advisor, was tapped to map the Jewish community with the goal of broadening access to security professionals and resources. A U.S. Marine veteran who holds a J.D. from Harvard Law School, Masters came to SCN from The Soufan Group, a security advisory firm. He also served as the Executive Director of the Department of Homeland Security and Emergency Management for Cook County, which includes Chicago.

Today, SCN gathers, analyzes and disseminates intelligence, helps with risk assessment and the development of emergency plans, and provides training, Masters said. Its “network” consists of the 146 federations of the JFNA, the roughly 50 organizations in the Conference of Presidents and about 300 other organizations that are too small or geographically isolated to have a federation, but maintain an affiliation with the federation system, Masters said.

On Thursday, SCN and the Anti-Defamation League (ADL) announced that the two groups had signed a formal partnership agreement, which focuses on intelligence, for the first time. “There’s a lot of businesses where competition may be good, and disruption may be advisable,” Masters told eJP. “Safety and security are not one of those areas.”

The last violent assaults on identifiably Jewish places — synagogues in Pittsburgh in 2018 and Poway, Calif., in 2019; a kosher grocery in Jersey City, N.J. in 2019 and a Hanukkah gathering Monsey, N.Y. weeks later — happened before the pandemic, which has been a period of relative quiet, said Naureen Chowdhury Fink, executive director of The Soufan Center. Reopening, she added, could reverse that trend, which is a function of empty houses of worship and the fact that the general decrease in public activity made it harder to prepare and execute attacks.

William Braniff, director of the National Consortium for the Study of Terrorism and Responses to Terrorism (START) at the University of Maryland, said that START’s data of about 1,000 bias crimes between 1990 and 2018 show an elevated risk to Jewish communities of volent attacks against groups of people. Antisemitic perpetrators account for 10.4% of all offenders in the data set, yet comprise 38% of the individuals in the data who planned or committed mass casualty attacks, he said. START has also noticed, in addition to sentiment that combines anti-government and antisemitic elements, the spread of a claim that Jews benefit from COVID-19 because they own pharmaceutical companies.

“All of these things would suggest that there is a higher-than-normal threat to Jewish institutions,” Braniff said. As Jewish institutions look toward reopening, many are already thinking about these issues, Masters said. He attributes that heightened awareness to the 2018 massacre of 11 Jews at prayer at Tree of Life Synagogue in Pittsburgh.

In the past year, about 15,000 people received SCN instruction, such as Countering Active Threats and Situational Awareness — most of it online. Masters said he was pleasantly surprised by the value of virtual workshops given his own preference for in-person training. As an example, he cited the “badass bubbies” —  two older women who are members of a Conservative synagogue in the Washington, D.C., area that had partially reopened. They were assigned to monitor the door on Shabbat late last year after taking SCN’s “Situational Awareness” training, which helped them notice an unfamiliar man who was carrying a cane, but not using it. They locked the doors and called the police, later learning that the cane contained a sword and that the man had been trying to enter several houses of worship, Masters said.

Masters told eJP that he’s glad both that the Department of Homeland Security has a new confirmed secretary — the first since Kirstjen Nielsen’s ouster in April 2019 — and that the secretary is Alejandro Mayorkas, a Jewish attorney of Cuban-Romanian descent who served in the Obama administration. Mayorkas had served on SCN’s national advisory board, and understands the value of religious security organizations, Masters said. “He is an individual who understands the community and is from the community,” Masters said. “With new leadership at DHS, there’s been a dramatic increase in engagement, not just on the issue of domestic violent extremists, but with the faith-based community,” Masters said, noting that last Thursday morning, he participated on a conference call with other religious organizations convened by the White House and DHS. Both Braniff and Masters pointed out that DHS also allocated at least $77 million of its $1.8 billion in grants to state and local jurisdictions to fight specifically against domestic violent extremism.

Mayorkas also said domestic terrorists are the most significant terrorist threat facing the country, which represents a shift in rhetoric away from a focus on international terrorism, said Fink. “The fact that we can recognize the problem is a big step,” she said.

No other religious group has a security network as developed and professional as SCN, Fink and Braniff said. Masters said SCN sees part of its mission as sharing its knowledge with other faiths, and that SCN invited other groups, such as the National Council of Churches, to six webinars that help nonprofits apply to DHS’ Nonprofit Security Grant Program. “We have to make sure underserved areas have these grants, and that there is coordination on these issues,” Masters said. “It doesn’t help me that my synagogue has eight to 12 security officers, but the place down the street has a 15-year-old kid buzzing people in through the door,” he said. “It goes back to the bubbies.”