Rabbi Noah Farkas, who assumed the portfolio in January, shared his insights and expectations with eJP 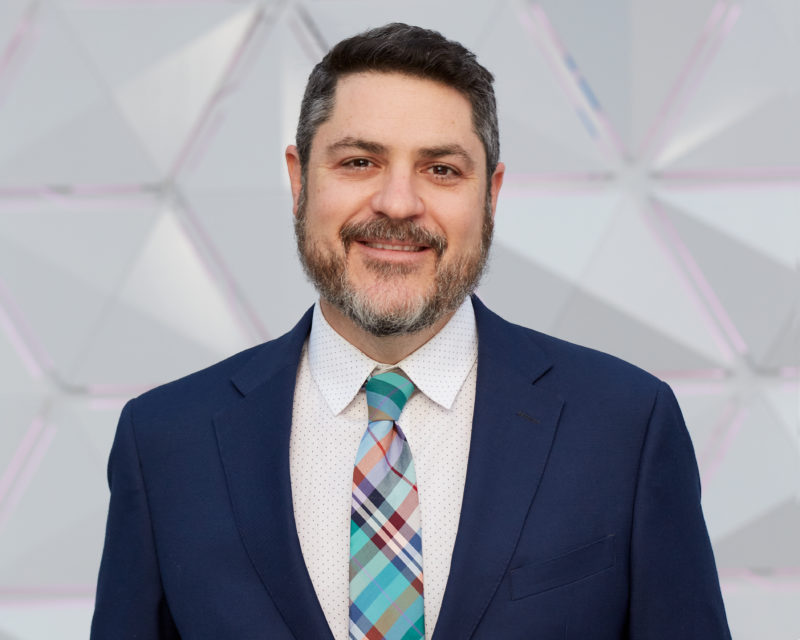 Just six days into his new job as CEO of the Jewish Federation of Greater Los Angeles, Rabbi Noah Farkas had found some time to make his office his own: Along with 30 still-packed boxes of books, the Plano, Texas, native made room for a Dallas Cowboys mini-helmet, a baseball he caught at a Dodgers game and a rock decorated by one of his kids to read “Abba rocks 2015.”

In truth, Farkas’ work had begun two months earlier; before he’d moved into the federation building on Wilshire Boulevard, he’d already held more than 100 meetings with stakeholders throughout the Jewish community: people who received help from the federation, the 130-plus federation staff members, plus the board, donors and major partners. The personal stories of L.A.’s Jews, he told eJewishPhilanthropy, are “key to understanding who we are and what we all want to accomplish.”

In a generational transition, Farkas, 42, is succeeding Jay Sanderson, 64, who headed L.A.’s federation for 12 years. Farkas told eJP that he intends to use three values — trust, leadership and diversity — to guide federation operations. He hopes to express those values by prioritizing mental health, fighting antisemitism, Israel engagement and programs that explore Jewish diversity. He will be guided in that effort by a Los Angeles Jewish community study due out later this year from the Cohen Center for Modern Jewish Studies at Brandeis University.

A 2020 study put the number of Jews in the area at 530,000 — making it the country’s third-largest Jewish population, outside of the New York City area and southeast Florida. The federation has a 2022 budget of $56 million.

“I want us to think proactively about what kind of Jewish life we want to create together, the kind that we should be dreaming about [and] thinking about for ourselves, for our children, for anyone who wants to go on this journey with us,” Farkas said, adding, “It begins with a federation telling its story in a way that tells the truth, that we’re actually not as deeply self-interested as we are interested in the community, and the thousands and thousands of people we help.”

(Disclosure: the writer and the subject have participated in two Jewish leadership program cohorts together over the last decade.)

Farkas comes to the federation after 13 years on the pulpit at Valley Beth Shalom, a Conservative synagogue in Encino, Calif., with more than 1,500 members. The Jewish mission of the federation, he feels, is not that different from that of a synagogue — it’s just less localized.

“Synagogues, schools, camps and agencies are limited in their scope and mission to their part of the community,” he said. “They need to be more focused; it’s what makes them unique and special. The federation is [not] and should not be limited in that way. We are the only organization in Los Angeles whose interest encompasses everyone.”

Alongside his pulpit, Farkas worked for several years to address homelessness in Los Angeles, mobilizing a coalition of churches, synagogues and other organizations to pass first-of-its-kind legislation that allocated more than $5 billion to build housing and services for the homeless and the near-homeless. He also served as commissioner and chairperson of the Los Angeles Homelessness Services Authority (LAHSA), a nonprofit that works with the city. Combating homelessness is part of the federation’s work to support the most vulnerable, and Farkas hopes to jumpstart volunteer opportunities, including for the Greater Los Angeles Annual Homeless Count, which is scheduled for the end of February, and drew a sizable Jewish delegation before the pandemic.

“Every single person you meet, whether you think you like them, or you don’t like them, whether they agree with you or don’t agree with you, is coming with an entire story behind them, they’re whole human beings,” he said, adding that the same holds true for other divisive issues within the Jewish community.

“We can’t necessarily fix that conversation globally, nationally or even locally, because the Jewish community is just too small,” he said. “But what we can do is fix it inside the Jewish community…When you prioritize people over programs and relationships over narishkeit [foolishness], you suddenly find the time for what is important,” he also said. “And there is nothing more important right now for all of us than reinvigorating our relationships with each other – friends, acquaintances and those who don’t agree with us.”

Handing the reins to Farkas, Sanderson said the federation faces challenges including Jewish identity shifts, coping with the pandemic, combating the “alarming legitimization” of antisemitism, and “fighting against an institutional infrastructure often unable or unwilling to evolve and adapt.”

“Noah understands these challenges and will need the community behind him in order to make the impact he wants and needs to make,” Sanderson told eJP.

Farkas’ social justice experience extends back to his pre-rabbi days. As a rabbinical student and U.S. Naval Reserve chaplain during the Iraq War, Farkas worked with military families of all faiths to prepare them for deployment and help them after they returned home. He also worked as a pulpit rabbi in Mississippi in the aftermath of Hurricane Katrina.

He called COVID-19 “a natural disaster like Katrina, but it just keeps coming.” He added that the pandemic was “like taking a bonfire and pouring gasoline on a world already in crisis,” pointing to opioid addiction, teen depression, and political and economic crises as having created anger and impatience.

“This trauma has really taken up so much of our bandwidth, that we just don’t have enough left for anyone else,” he said. “It can take years before a community can really reconcile with itself with the trauma that a natural disaster has brought.”

In addition to The Jewish Federations of North America’s efforts to make faith-based nonprofits eligible for Paycheck Protection Program loans and to direct federal aid to the Jewish community nationwide, to keep schools, camps, synagogues and agencies running, in L.A., the federation’s WellFed program provided close to $500,000 in supermarket gift cards to help more than 1,300 food-insecure college students and young adults.

Aliza Kline, CEO of the social dining nonprofit OneTable, who served with Farkas on the board of JOIN for Justice, a group that trains Jewish nonprofit leaders, said Farkas is “inspired by Torah and energized by justice.”

“He framed every conversation with love, Jewish wisdom and hard, strategic questions (with a good dose of humor),” Kline told eJP.

One aspect of the federation’s work Farkas hopes to change is its approach toward issuing public statements. His mentor and rabbinic colleague at Valley Beth Shalom, the late Rabbi Harold Schulweis, also the founder of Jewish anti-genocide group Jewish World Watch, taught Farkas to think about what actions rabbis want people to take after hearing their sermons — like attending a rally or calling legislators. In real moments of crisis, the federation may still make a statement, Farkas said, but “there needs to be a ‘therefore’ that comes along with it.”

Farkas also told eJP that he wants to ensure the federation serves a broad range of Jews — in part due to charges that its programs weren’t sufficiently egalitarian or diverse. Farkas believes some — but not all — of these criticisms are based on misinformation, and pointed out that the vast majority of the federation workforce are women with varying backgrounds, and the staff is 40% non-Jewish. (These numbers are in the general range reported by Leading Edge in the 2021 Annual Employee Experience survey of 221 Jewish nonprofit organizations.) The L.A. federation also has a vice president whose portfolio is diversity, equity and inclusion (DEI), and an in-house DEI task force.

“We have more diversity than what’s been projected. That doesn’t mean we don’t have a long way to go,” he said. “We need all ideas, from all backgrounds, to shape the kind of Jewish future we want to build. And so that means putting those folks who have a desire to work on building this at the table, no matter what your background is.”

He added that diversity has a Jewish component, often omitted from DEI efforts. “I have had many conversations, including more this past week after the Texas antisemitic attack, where Jews who worked for non-Jewish corporations and organizations felt unsupported and unseen. This has left many wondering why — with all of the Jewish community’s very laudable focus on DEI internally — why are Jews, a historically vulnerable minority, left out?”

This year, Farkas is also planning to develop a more transparent model of how federation money is raised and invested in their partners, he said, so that donors understand their impact. The federation has approximately 12,000 individual donors.

“Helping someone from falling into homelessness, bringing that Jewish child to Jewish education, fighting against antisemitism, supporting a protected and flourishing State of Israel,” he said, listing some of the federation’s goals. “Their dollars really do do those things. And I’m going to try to show them how.”