Synagogue dues are dead: What’s the price point at which quitting the temple is impossible?

What’s the price point at which quitting the temple becomes unnecessary or nearly impossible?”

So asked a business leader in our synagogue. “Figure out that price point and our synagogue will grow organically instead of continuing to shrink.” 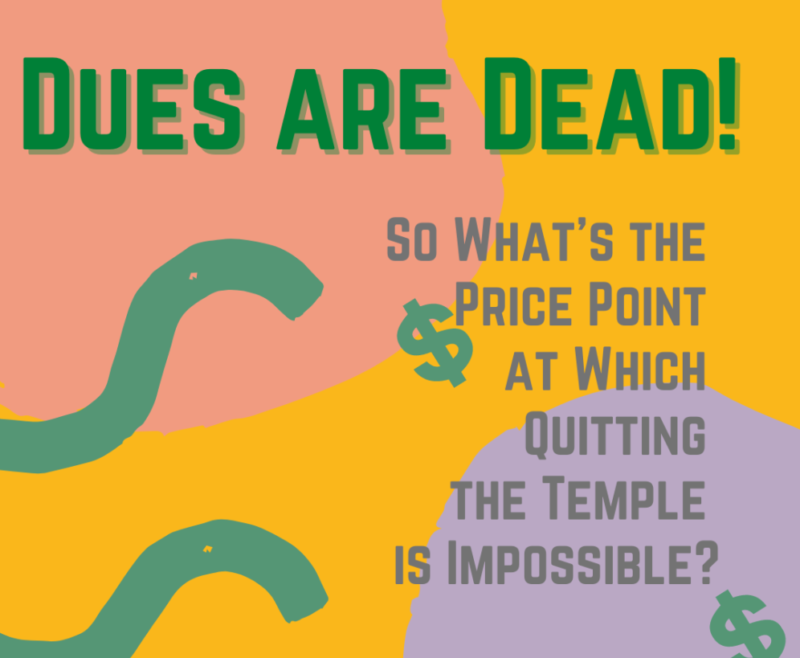 During a fascinating lunchtime conversation with this trusted congregant, the search for answers to challenging questions about our dues structure came to an end and we began to envision a new way forward.

Like most synagogues, Congregation Or Ami (Calabasas, California) understood that dues represented the largest portion of our budgeted income. Our membership, once climbing, had been slowly declining. After years of a 14% resignation rate, our 2011-2014 data showed that 22-24% of our households were leaving each year. While we had robust levels of new households joining, these did not ameliorate the losses. The 2008 financial meltdown was catching up with our synagogue. It was time to confront it head on.

Discussions with those who left yielded four major once-frightening findings:

Because we knew that every household that resigned directly hit our bottom line, affecting everything from dues income to fundraising opportunities to synagogue morale, we had to be risk-takers, disrupting our own marketplace. We had to address the financial elephant in the room: Dues were dead!

We consulted with successful business leaders from the congregation to whom we posed a straightforward question: if everything were on the table – no sacred cows – how would you restructure the synagogue’s financial model?

Additionally, we consulted with:

Dr. Beth Cousens, who was brought in by the Jewish Federation of Greater Los Angeles.

Diana Ho and Management Arts, my rabbinic coach, who has guided my strategic thinking for over five years now.

We then invested a small task force with a gigantic mission: throw out traditional dues and shape a new funding model that would meet our short- and long-term financial needs.

Clearly, solid strategic thinking, innovative programmatic and spiritual efforts, and deputizing our failure-fearless staff contributed significantly to those increases. But most of us credit the new financial model we devised.

Ultimately, committed to being Kehillat Netflix instead of Beit Blockbuster, we took a page from the Netflix playbook, a business model based on low cost, simple packaging and multiple tiers. Based on financial analyses of congregant 5-years dues and giving trends, conducted by volunteer congregants – including multiple MBAs and former consultants – we chose to widen our subscription base, while engaging donor-investors who would support the expansions of our community. We created 4 Partnership Tiers, multiple entry points for participation in our synagogue:

For those who are primarily cost-conscious, the Congregant tier ($1,500) includes just the basics (High Holy Day tickets, and access to clergy and synagogue programs) at a cost that was half our previous dues.

The Partner tier ($3,000) is considered the “standard” membership level, and confers all the benefits one would typically expect for synagogue “members,” including High Holy Day tickets, Gala tickets, access to all events, and participation in youth groups. Those with children in our religious school must participate at least at the Partner level in addition to paying for tuition. Recognizing this can be a burden for many families, we maintain a simple, robust, and confidential variance process that quickly yields doable reductions for those who need it.

The Sustainer tier ($5,000) invites families to contribute some additional tzedakah along with their partnership commitments, and at the far end of this spectrum, the Builder tier ($10,000) makes explicit our desire to engage new donor-investors in our synagogue. Those that participate at these levels were offered various forms of perks, recognition and thanks, including a special gathering with clergy and a plaque in the synagogue. However, our new Sustainers and Builders compellingly argued schar mitzvah mitzvah (that the reward of the mitzvah is the mitzvah itself – Pirkei Avot 4:2). Among the package of perks, the one that has proven to be most valuable – both to the synagogue and to the Builders – is the inclusion of a second, 1-year “gift partnership” that can be given to another family that has never been part of the Or Ami community before. In this way, our Builders truly become our partners in building the future of Congregation Or Ami.

These partnership commitments are based on two adult households, and single adults/single adult households pay close to half for each tier. We also have a tier specifically for young families with children too young to participate in our religious school. All also pay a safety and security fee and a community service fee. The core principle remains across all these tiers: create multiple entry points to satisfy the multiple reasons people join a synagogue. View the specifics of Partnership Levels at orami.org/join-us.

In five years, even as our partnership income has increased every year, we have raised partnership fees only once, by $100 for two-adult families. We are guardedly hopeful for continued success as we are currently meeting our goals for our conservative two-year congregational COVID-19 budget.

4 Game-Changing Pivots from our Playbook

Far from resting on our laurels, Congregation Or Ami continues to engage in our own synagogue disruption strategy, interrogating long held practices to uncover areas that once served us but now require rethinking and redirection.

We believe that no institution – no synagogue – has an inherent right to exist. We recognize that we cannot take the survival of our synagogue for granted. Only by continually disrupting the marketplace and responding with innovative and disruptive business and financial practices can a synagogue endure.

Congregation Or Ami plans to do better. We intend to soar.

David Weisz is a business leader with organizational transformation experience across a diverse set of industries. With a specialization in Organizational Change Management, he enjoys driving big, audacious ideas from concept to reality by taking a people-first approach to enable success.

Rabbi Paul Kipnes, spiritual leader of Congregation Or Ami (Calabasas), is a public speaker on spirituality, co-author of Jewish Spiritual Parenting, a spoken word poet, synagogue disruptor, spiritual journeyman, trekker, and regular meditator. He blogs at paulkipnes.com and at midrashicmonologues.com.