Jewish life inherently has internal and external challenges and threats. A survey we conducted last year among European Jewish leaders noted their two biggest concerns were antisemitism and community sustainability. If ever there were two concerns of existential import, these are glaring. Camping responds to both.

The last weeks of summer always transport me back to England’s northeast, where as a 14-year-old I attended my first Jewish summer camp experience away from my family. In the learning and laughter, and the bonds made with friends I have until today, we built and lived a Jewish community.

Those two weeks strengthened my connection to my identity – already well-formed through strong family engagement with Jewish communal life in London – and helped me see the power of mutual responsibility and the potential young Jews had to vision and lead. That summer set a journey that has spanned trips to Israel, becoming a counselor myself and serving as a camp head for several years. 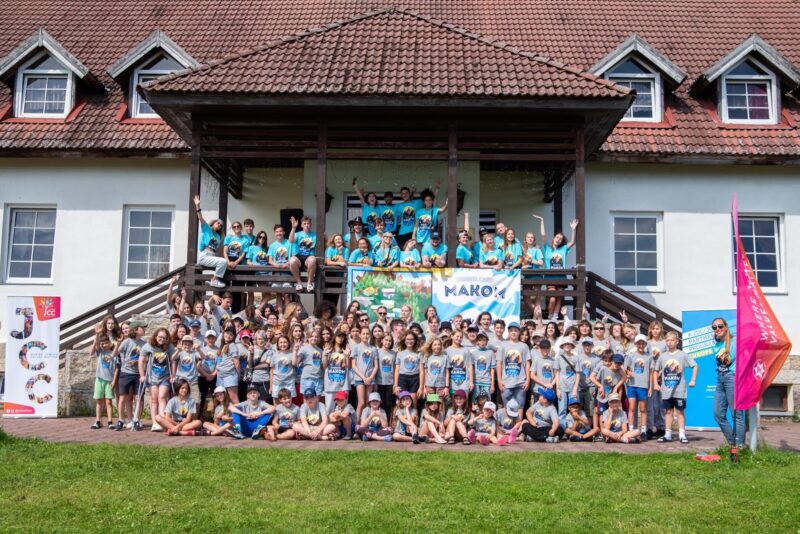 I followed in the footsteps of those who came before me and similarly carved out the path for those who came after. This cycle offers a powerful source of energy and commitment, to be active and to engage within Jewish communities far and wide.

This is especially so in Central and Eastern Europe where, for more than three decades, my organization, the American Jewish Joint Distribution Committee (JDC), the Ronald S. Lauder Foundation and others, have invested in such experiences, most notably the JDC-Lauder Szarvas International Jewish Summer Camp in Hungary. Together, alongside and in partnership with the communities themselves, we’ve shaped the leadership of Jewish communities that emerged out of the Holocaust and Communism.

In fact, ever since I first began working for JDC, camping has been an ultimate reference point for the triumphs and challenges of building Jewish community in this part of the world. Why?

Jewish life inherently has internal and external challenges and threats. A survey we conducted last year among European Jewish leaders noted their two biggest concerns were antisemitism and community sustainability. If ever there were two concerns of existential import, these are glaring. Camping responds to both.

First, camping develops leaders, innovative Jewish programming, and can springboard the engagement of the unaffiliated, all creating long-term sustainability. Second, it develops positive and confident Jewish identities, empowering Jews to own their narrative, give meaning to Jewish life, and the self-assurance to stand up in the face of hate. In this way, individual, group, and even community resilience emerges.

While this outcome is of urgent significance, there are other lessons to be learned from European Jewish communities who choose to prioritize camping as a central effort to build for the future, often against the odds. This is especially true among smaller communities, often overlooked or underestimated, who have gone from relying heavily on outside support of finance and content, to running their own camps and wider communities on their own terms.

From them we can glean much about keeping Jewish life vital and appealing, and balance it with a reality requiring them to adjust to the ongoing pandemic, economic stress and continued needs of Ukrainian Jewish refugees in their communities. In conversations we’ve had with camp leaders from Bulgaria, Estonia, Latvia, Poland and Romania we learn much about how to strengthen Jewish communal life. Whether it be modeled in a summer camp or within our broader communities each and every day, these three takeaways are key:

Value Individual Voices, Build Powerful Collective Experiences: We need to recognize that individuals have different interests, levels of knowledge and reasons for coming (or not coming) to Jewish spaces. Our goal is to turn camp and communities into spaces where everyone can find a purpose, welcome them for who they are, and weave that uniqueness into a rich tapestry of community and communal responsibility. In doing so, they experience the beauty of the collective, are truly seen and heard, and come to believe in the importance of community and want to engage further.

By listening and hearing what people want, you design experiences that meet them where they are and demonstrate the Jewish community can be flexible and creative. As Kaja Siczek and Micha? Kos from the JCC Warsaw summer camp noted, “It’s important to be in touch with people and talk to them, listen to their needs. Their needs may not necessarily be “Jewish programs” as we understand them, but we’re the ones who can make programming Jewish and engaging at the same time.”

Additionally, take welcoming people to the next level by making it a one-to-one experience, building confidence between communities and individuals. As Inna Lapidus Kinbere, director of the JCC Riga and Ilana Kugel, director of Latvian Jewish summer camps, said: “People like to feel special, that’s why inviting them personally and approaching them personally is very valuable. Find out why people do not want to join or go to camps, perhaps they know only rumors, or they have wrong perceptions, and it’s worth setting the record straight.”

Outsized Spirit – not Big Numbers – Builds Generational Jewish Leadership: When we become too concerned over participation figures or population data, we lose sight of what can result when you take any number of people away from their day-to-day distractions and focus on the education, connection, and energy that arises from meaningful experiences overflowing with infectious enthusiasm for Jewish life. Indeed, that spirit can drive engagement during the rest of the year as we recreate, in micro-moments on the calendar, what camp offers 24/7. From that, you shape and invest in new leaders and innovative thinking to keep programs viable and communities sustainable. You can also make Jewish community a priority among those who might otherwise be preoccupied with offerings in wider society or with everyday demands.

As Dariya Melamed, the Bulgarian Jewish camp director, put it, “It is never about the quantity for us. The content is what we are looking for in each and every thing we create. For us it is all about providing a meaningful Jewish experience to every individual and we do believe that Jewgaton [their local residential Jewish summer camp] is the heart of our community and when we create our camp with passion and devotion the feeling of belonging to the community spreads among the Jewish people.”

Much of that can be attributed to those creating the experiences, and “if you are brave enough and find the right team to work with – the ones who are devoted, who are ready to do anything possible for the kids and to create the best experience ever, to turn something that in the beginning looks like “nothing” and manage to turn it into “everything” – we can definitely achieve any goal and nothing can stop us.”

From this, we can ensure they experience Jewish community at its best and draw out new generations of Jewish leadership and personal expression. Ery Pervulescu, from Romania, noted that “from the current President of the FEDROM [Federation of Jewish Communities of Romania], to most of the JCCs staff, an overwhelming majority have a history of attending Jewish summer camps. Many of them remember years later their first experiences in camps as their first connection to Judaism outside of their family.” And for those whom Jewish life is entirely new, “having the chance to have a week full of authentic Jewish experiences, doing things that they don’t usually do at home, empower them to take some of the traditions back into their families.”

Crisis is our Opportunity: There is no greater test for the mettle of a community than a crisis. The last few years have presented more than its fair share of life-changing and threatening events. The pandemic impacted community members’ lives and livelihoods as well as the financial health of communities and their ability to respond to growing needs. This continues to varying degrees in many places.

This summer presented climate disasters and global inflation. And, of course, European Jewish communities are also taking care of newly arrived Ukrainian Jewish refugees who may be there for the long term. Taking it all on, smaller European Jewish communities demonstrated that determination and adaptability make the difference. The question, for them, and for all of us, should not be “if” something can be done, but “how.”

Irina Shlick, the director of the Tallinn JCC, shared how they engaged their team even when they could not be together in person to tee up for this summer: “During the pandemic we did not have a chance to gather, but we were still providing professional development opportunities for the local team, despite the fact that we could not provide them with the in-person practice. After a long time when they were saving the knowledge and energy, this year they finally were able to “explode” in camps. I never saw such a passionate and energized team before. They were very motivated and united. This drive we are feeling afterwards, when they are coming back to the community.”

The same applied to the presence of Ukrainian Jews in the Estonian community. As a community with a history of Soviet rule and Russian-speaking members, they felt well situated to welcome this new group of Jews and provide a summer experience with welcome results for the rest of 2022. “The situation in Ukraine brought a lot of young families to Estonia and for us it was very important to integrate them in Jewish community life and make them feel safe. We saw how these kids were enjoying camp experience and felt thankful for a great time. Most of them are planning to join our weekly programs during the year,” said Shlick.

These, and many other conversations, confirm my long-held belief that camping is one of the central engines for community life, invigorating identity, building connections between members, and developing leadership for decades to come. This hard work can sometimes be messy, often be joyful, and strengthen the commitment of those who support, organize, lead, and participate in Jewish communities driven by mutual responsibility and engagement.

Smaller European Jewish communities, often met by outside skepticism over their future, are an inspiring example of how we can achieve this. This sweet irony can carry us forward into a New Year filled with the blessing of limitless possibilities.

Russell Wolkind, JDC’s director for global planning, is a veteran professional of its European operations.