Reality vs. perception on college campuses

[The] disconnect between lived experience and the perception of antisemitism is problematic, as it means students feel alienated as Jews on campus, even in situations where they ought to feel that they belong.

As a professional working with Jewish students at NYU, and as an active member of the Jewish community, I have heard many stories of Jewish students encountering antisemitism on college campuses. According to some, the problem has gotten so bad that there are those who now advocate that Jewish students eschew college education altogether. For my doctoral research, I decided to speak with students on three campuses — one large public university, one large private university, and one small liberal arts college — to understand how they view their own experiences. What I found painted quite a different picture than the one constantly portrayed in news reports and social media.

Many of the students I spoke with echoed the messages that are now so familiar to anyone concerned with Jewish life on campus. They spoke of their fear of “outing” themselves as Jewish on campus. One young woman told me she chose not to hang a mezuzah on her dormitory door, so as not to identify her room as one occupied by a Jew. Another young woman pulled her Star of David necklace out from under her shirt, where she told me she hid it so as not to attract attention. Yet another student told me that he had decided not to wear a yarmulke outside of the Hillel building. These behaviors all speak to the major issues that we have learned to fear. 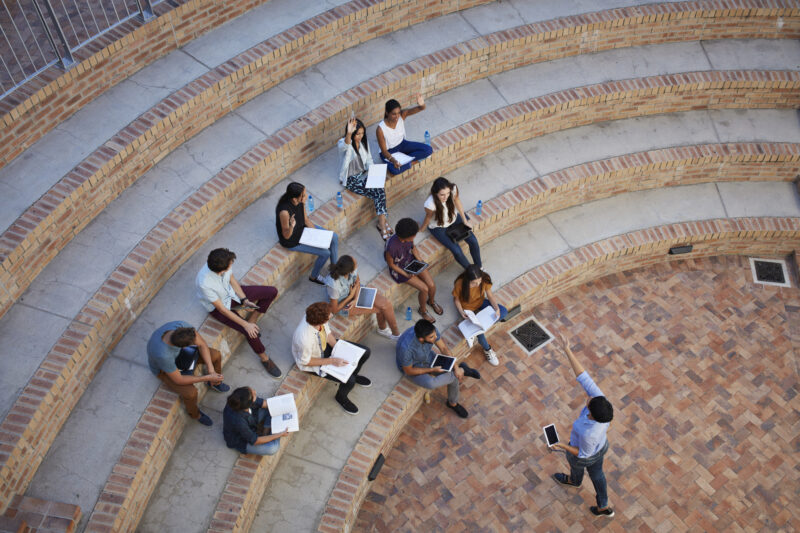 Students having class with book and tablets, in outside auditorium. Students with raised hands

Yet despite these fears about exposing their Jewish identity, most students also claimed that they personally never experienced antisemitism and did not know of any antisemitic occurrences on campus. Their fear of antisemitism was informed not by their own experiences, but by what they read online and on social media. The student who chose not to wear a yarmulke on campus told me “I feel like I’m pretty accepted for who I am. But you hear stories of antisemitism all across America, so maybe me I’m just taking off the kippah because of that.” The student who was too scared to hang a mezuzah on her dorm room door added, “but there’s never been a moment when someone’s, like, outwardly, like called me out for being Jewish…like 30% of the population here is Jewish, so I feel like they take… antisemitism pretty seriously at the college, so if anything were to happen, it would be a big deal.” The same student who told me she hid her Jewish star necklace also shared that she wore an IDF sweatshirt on campus and received no push back.

When asked where they got their information about Jewish life on campus, many cited social media. The ubiquity of social media creates a sense that what is happening in one place is happening in all places. Another student named Wikipedia as her main source of information, while another told me she did not want to share her sources of information with me. Students also freely shared that their fear of antisemitism was something they instinctually felt, as opposed to something concrete they could pin down.

This disconnect between lived experience and the perception of antisemitism is problematic, as it means students feel alienated as Jews on campus, even in situations where they ought to feel that they belong. If a campus administration is doing everything in its power to meet the needs of Jewish students, those students should, ideally, feel comfortable and confident in expressing their Judaism. The fact that they do not feeds the constant worry that campuses are no longer safe environments for Jewish students.

Hillel staff have an important role to play in helping to adjust the perception of Jewish student life on campus to accurately represent the lived experience of the vast majority of students. Of course, Hillel staff cannot prevent students from reading articles online and social media that send the message that college is a dangerous place for Jewish students. Stories of antisemitism on campus go viral and gain attention, thus is it likely to assume that media outlets will continue to publish them. But Hillels should try to highlight for students the differences between the scary things they read online, and the situation on their own campuses. If those looking to gain followers and clicks continue to push the message that students should feel unsafe, students are likely to see antisemitism lurking around every corner. They are likely to feel that way, that is, unless they are trained to objectively assess their own individual situation.

Of course, antisemitism continues to be a real problem in the United States, and Hillels do need to address the safety and wellbeing of their students. Hillels should make sure that their physical space is secure from attack, and pursue grants offered at the federal and state level for increased safety infrastructure. Hillels should make sure they know who is attending their events and be there to help students process their feelings in the wake of attack or prejudice. But students should also feel safe and secure in their identity and should not feel that they need to hide their Judaism. Online messaging is causing students to hide even in environments where their identity is accepted and celebrated, and Hillel staff should help clarify what is really the case on campus, versus what students may read online.