Philanthropic moonshots (be they an impossible rescue in a war zone or a project to relieve poverty in your own city) start with a recognition that there’s a major wrong to be righted and that, as a philanthropist, you can’t look the other way.

Writing a book means sharing something that one has with the world. It is, in a way, a philanthropic activity, which is why it gives me special joy when a Jewish Funders Network member writes a book.

The genre of “philanthropic chronicles,” as I call it, just got enriched by Thou Shalt Not Stand Idly By by our former board chair, Georgette Bennett. 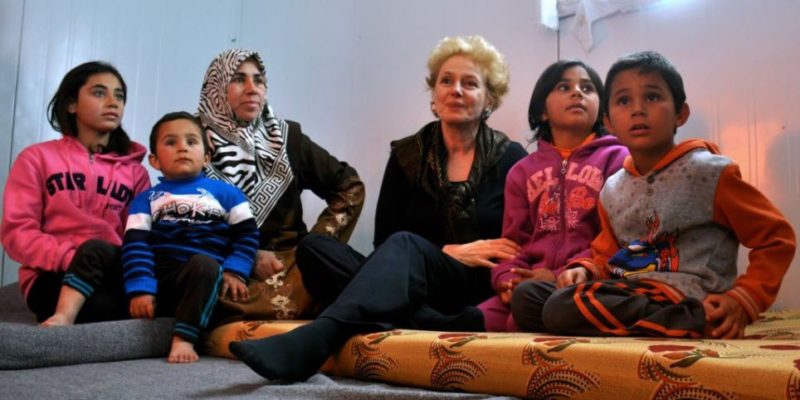 Set against the backdrop of the Syrian civil war, the book recounts the efforts of Georgette and others to alleviate the suffering of millions during the worst humanitarian catastrophe of the last decades. The story is riveting; in order to assist – and save – those civilians displaced, injured and broken by the war, Georgette forged seemingly impossible coalitions that cut across religions and across national and ethnic boundaries. Jews, Muslims and Christians cooperated and, years before the Abraham Accords were signed, Syrians and Israelis worked hand in hand.

The story is fascinating and at moments, it looks more like a cloak-and-dagger thriller than a book about social activism. I, however, couldn’t help reading it through a philanthropic lens. Because one can distill valuable, even unique philanthropic lessons from Georgette’s Syrian adventures. Those lessons are not unique to a civil war or a natural disaster but can be applied to any philanthropic field.

The first philanthropic lesson of the book is in its title. Philanthropic moonshots (be they an impossible rescue in a war zone or a project to relieve poverty in your own city) start with a recognition that there’s a major wrong to be righted and that, as a philanthropist, you can’t look the other way. At a JFN conference a couple of years ago, Jeff Schoenfeld, JFN board member and former president of UJA-Federation of New York talked about “discretionary” and “non-discretionary” giving. In his view, there are issues from which you can’t avert your gaze. For Georgette it was the plight of Syrian refugees. Which one is it for you?

At the root of effective philanthropy there’s a balance between feeling empowered to create change or tackle a major issue and the humility to understand to we don’t know all the answers. In the Syrian humanitarian effort, there was an incredible level of daring. There were funders who didn’t fear taking bold and decisive action, but there was also a lot of humility based on the understanding that they were operating in a highly complex region and that people on the ground – from local NGOs to the International Rescue Committee, to Israel Defense Forces officers, to Syrian businesspeople – know its intricacies better.

3 – Good philanthropy is additive, not duplicative.

In the book one can see that Georgette sought to address gaps in the existing response to the crisis, to enhance it, not replace it or weaken it. In many philanthropic endeavors, good intentions backfire because funders don’t always look at the entire picture of a field. In this case, there was a careful analysis of “who is doing what” and more importantly “who can do certain things and who can’t.” For example, private philanthropists can do things that are impossible for governments, and businesspeople can cut through diplomatic logjams. In every disaster, be it natural or man-made, there’s what I call a “systemic response”; i.e by governments and international agencies like the Red Cross, but this systemic response, by its very scope and nature, always leaves gaps, because it can’t be designed to address every situation and every need.

To tackle difficult challenges and seemingly unsolvable problems, philanthropists need to develop a broad strategy of partnership and coalitions. We are conditioned to believe in the mythical magic of the lone genius who “goes at it alone,” but that rarely succeeds in the real world. What Georgette’s book shows is how a conscious, painstaking and deliberate effort to build and maintain partnerships is the key to success. One of the problems of partnership is that we tend to limit ourselves to think only of our traditional allies and fail to build bridges with unlikely, but critical partners. The success of Georgette’s Syrian project is based on “thinking outside the box” in terms of partnerships. When creating partnerships between unlikely allies, like Jewish and Muslim organizations, it’s critical to focus on a concrete common goal and not try to agree on every issue. It is also important to determine the unique contribution that each partner can bring.

Of particular relevance for me is the partnership between networks and infrastructure organizations. As the book tells, Georgette used JFN as a platform to connect with like-minded funders and expand the scope of the work. Platforms like JFN exist precisely to help funders realize their philanthropic visions, and yet, some funders don’t know how to take full advantage of them.

And when we talk about partnerships, we need to remember that it’s all about relationships. Georgette invested time and energy in cultivating relationships that became genuine friendships. Trust among partners can be built only when we know, understand, and appreciate one another.

Many philanthropic projects fail because the funders lose interest or pull their support too soon. When tackling a difficult challenge, like that of Syrian refugees, one needs to be willing to sustain a long-term commitment. The Syrian civil war started 10 years ago, and Georgette is still involved with it. Many funders have instituted an arbitrary policy of a three-year grant cycle. That may be useful in certain fields, but it’s certainly useless, and even detrimental, in areas that demand a sustained effort over time (and most funding fields do). Many of the successes of the Multifaith Alliance for Syrian Refugees, the group Georgette founded, took time, and they could be achieved because those operating on the ground knew that the proverbial rug wasn’t going to be pulled out from under them.

Within this principle, the creation of lasting structures is key. One doesn’t want to be duplicative or create more nonprofits where they aren’t needed, yet a project as complex as this one needs a “backbone organization.” That can be its own new structure or can be “housed” within an existing one.

6 – Your leadership matters, but not your ego.

Funders have different “leadership brands” and there’s no “one size fits all.” Some like the limelight, some prefer to lead from behind, and others like to be anonymous. What this book proves is how critical Georgette’s personal leadership and activism was to achieve results. She was indefatigable in lobbying, speaking, presenting and advocating. She put her “personal brand” at the service of the cause. Not everybody has the same personal style, but we all exercise leadership in one way or another. To succeed in our philanthropy, we need to be ready to have personal “skin in the game.” We need to know what leadership style fits us best and then put our names and prestige behind the project. One thing all successful philanthropic endeavors share is that they have a funder who personally champions the project. But the leadership of the funder is just one part of the equation. Following the principle of “empowered humility,” the philanthropist needs to know when to let others take the lead. Professionals running programs need to be empowered, their expertise respected and their leadership acknowledged. The lead funder in this project took ownership, but also knew how to let the professionals deploy their know-how in the way the felt it best.

Georgette plenty of accolades and awards for her work before writing about it, so the writing of a book wasn’t a vanity project, but a desire to share her learnings, to create awareness about an ongoing crisis, and ultimately to encourage funders to make bold bets, take risks, and push the boundaries of what’s considered possible.

I think there’s a philanthropic lesson in the book itself. Many philanthropic endeavors are unknown beyond a small circle of folks “in the know.” Funders usually “reinvent the wheel” or stumble upon minefields already trod by others. Sharing the story helps guide future initiatives, but, in the broader sense, professionalizes the philanthropic field. It contributes to creating a body of knowledge and a repository of past experiences that help prevent future mistakes.

Ultimately, like the Talmud says, one that has knowledge and doesn’t share it is like tree planted in the middle of an inhabited desert: Nobody can benefit from it. Here, the fruits of Georgette’s work will benefit all those who seek to make a positive impact in the world.

Andrés Spokoiny is president and CEO of Jewish Funders Network. Listen to a conversation between him and Georgette Bennett on “What Gives?” the Jewish philanthropy podcast from JFN.