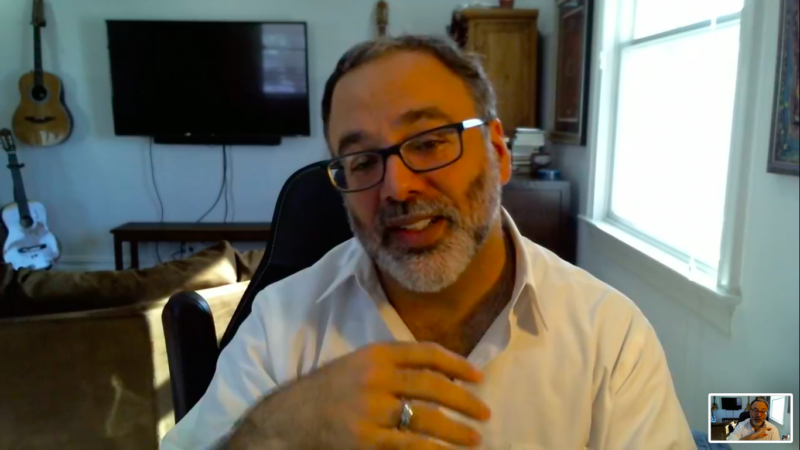 Rabbi Menachem Creditor and the UJA-Federation of New York started their weekday Facebook Live Torah study sessions as a short-term response to the pandemic. Today, Creditor and those who tune in will hold a siyum, a Hebrew word meaning “completion,” that describes a traditional celebration of both the end of a cycle of study and its renewal.

Creditor said his genre-bending online sessions were as much for him as for anyone else. “This was about my own sense of vulnerability. Here we were, suddenly apart from everyone. I was afraid I wouldn’t have the chance to teach and learn and do something that was defining for me, not only as a rabbi, but as a person,” he said.

Ordained by the Jewish Theological Seminary in 2002, Creditor served as a pulpit rabbi in Sharon, Mass., and Berkeley, Calif., and also founded the group Rabbis Against Gun Violence in 2016. He became the UJA-Federation of New York’s scholar-in-residence in 2018, focused on serving as a religious teacher to staff and supporters, but also holding public classes and lectures and traveling — to the AIPAC policy conference in Washington, D.C., for example, and to a civil rights mission in Selma, Ala.. He had long used Facebook Live and YouTube to expand the number of people his teachings could reach, and had the idea in early March 2020 that the broader community, isolated from each other by state-mandated lockdowns, could connect online. Creditor found an advocate in Mark Medin, an executive vice-president at the charity, who helped push “Morning Torah” online March 18, Creditor said.

It took a few weeks for Creditor to find his rhythm. “At first I was broadcasting from my side of the bedroom,” he said. “People would comment, ‘It’s so nice to see your home, maybe you should close your bathroom door.” Then his wife, Neshama Carlebach — a musician and spiritual leader herself and the daughter of Chabad Rabbi Shlomo Carlebach — helped him create an “office space” in their living room. She sometimes joins Creditor, who brings music into each broadcast, as he sings or plays the guitar. Each session starts at 9 a.m.; Creditor opens them by verbally greeting people by name as they sign in and comment on Facebook.

William Daroff, the CEO of the Conference of Presidents of Major American Jewish Organizations, has made the broadcast part of his pandemic life, tuning in three or four times a week. The greetings and comments have created a true sense of community, he said, bringing him into contact with both people he already knows, and new people. “One of the limitations of the pandemic is how many people we interact with,” he said. “The sessions are liberating; they make the house arrest we’re all under a little bit less confining.” Typically, about 100 people attend the live session, and then about 900 more watch it over the course of a day, Creditor said.

Neither he nor the federation has made any attempt to analyze the composition of the participants, but it seems equally split between male and female, and slightly concentrated in the New York area. Among the broadcast’s viewers is someone from the Gulf region who expressed interest in learning about Judaism, and a woman in North Carolina whom Creditor helped to create a virtual shiva for her son, who died while serving in the U.S. Navy. Every Friday, Creditor wears a white, button-down shirt in order to signal his preparations for Shabbat. This past Friday, participants greeted the sight warmly: “Boker Tov Rabbi … and sacred community … was looking for the white shirt,” wrote Susan Kronish Grotenstein, adding prayer and heart emojis. “It’s Shabbos, kind souls!” wrote Linda Landes.

Daroff cited last week’s discussion about the contribution levied on the wandering Israelites to build the portable ark in the parsha “Ki Tisa” as one that he valued for the thoughts it engendered about equity. “Each of the Israelites was required to put a half-shekel in a pushke,” he said, using the Yiddish word for a box used to collect charitable donations. “Every individual put in a half-shekel regardless of their station; this shows that we are all equal; we are all at the same level in the eyes of God.”

Creditor said that he was grateful to be part of the group during especially difficult times, from the killing of George Floyd by police in Minneapolis to Tisha b’Av, the day set aside to mourn the destruction of the Second Temple. He taught that day sitting on his floor and crying, like a true mourner. “All of a sudden it felt like we really did transcend the space,” he said.

Today, the completion of the cycle will be marked with music, and then the community will immediately start learning the next Torah portion — “Vayakhel.” To mark the anniversary of the broadcasts, Creditor is working with rabbis from across denominations to use the broadcasts as inspiration for a book of essays.

“Morning Torah” will continue for now, and Creditor said he thinks such learning should likely persist in the long term. It’s surprisingly effective and moving, he said, and there are also environmental benefits. “If I can have a real meeting of hearts and minds online, should I get on a plane and increase my carbon footprint?” he asked.

Daroff said he didn’t know how his schedule would play out post-pandemic, and that he might have more obligations that conflict with “Morning Torah.” But for now, it pops up on his schedule whenever he doesn’t have another meeting, and it’s what he focuses on. “I usually don’t multitask,” he said. “It sets the course for my day ahead.”