Imagine waking up one morning to realize that a civil war is tearing apart your county and your closest relatives and best friends who live in nearby cities and towns are now considered enemies. This is what happened in 1991 to those living in what was once called Yugoslavia.

The deadly “Yugoslav Wars” that ensued were marked by war crimes, including genocide, crimes against humanity, ethnic cleansing and mass wartime rape — until the current war in Ukraine, the armed conflict was often described as Europe’s deadliest since World War II. The conflicts lasted until 2001 and ripped Yugoslavia into six separate countries: Slovenia, Croatia, Bosnia and Herzegovina, Montenegro, Serbia and North Macedonia (plus Kosovo, whose status is still disputed.) 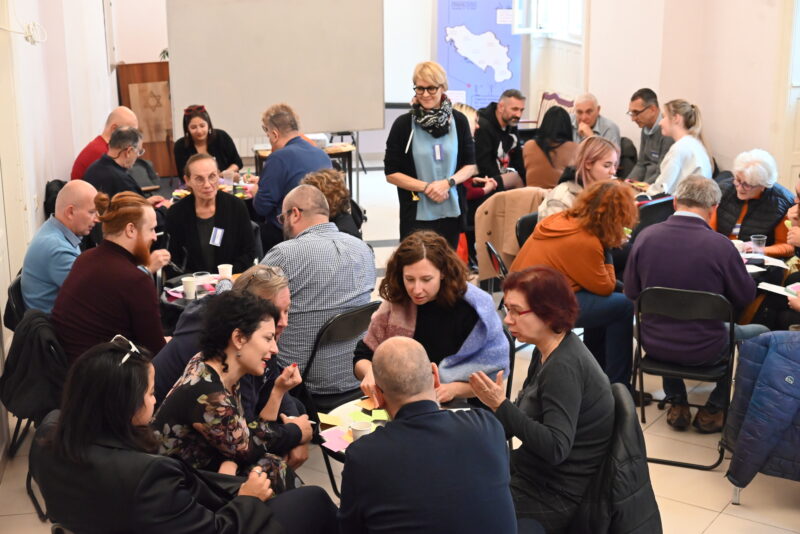 For the Jewish community, this traumatic civil war came several decades after 80% of the Jewish population (72,000 at its peak) was murdered by the Nazis and their collaborators. Half of the survivors ( about 15,000 in total) made aliyah to Israel and the rest (about 7,000) stayed put. They were, correctly,  considered the “true Yugoslavs” since they did not see themselves as Serbs, Croats or any other ethnic group. Although small, they continued a rich tradition of mostly Sephardi and some Ashkenazi Jews dating back to Roman times, with the majority arriving following the Spanish Inquisition.

Therefore, when Davor Salom, a prominent longtime Jewish leader from Belgrade, approached JCC Global asking to help reignite the network of Jewish communities in former Yugoslavia, we were quick to respond. Salom worried that the pandemic loosened the already fragile connections among these communities and that there has been a considerable gap in training future senior leaders in each community. He felt that since JCC Global specializes in network building and leadership training and is an external organization not involved in local politics, it was ideal to lead such an effort.

For JCC Global, it was important not to impose any foreign frameworks but rather work hand-in-hand with the local leaders. To bridge the cultural gaps and add expertise, we partnered with the team at Haver Serbia (a nonprofit working toward an inclusive Serbia). Together, we adapted the Dr. Mark Ramer JCC Global Hubs program and tailored it to the unique characteristics of the local communities.

The first step was to reach out to each community in former Yugoslavia and identify one or two leaders who are committed to ensuring the future of the local community. We selected some 30 participants from Belgrade, Novi Sad, Pancevo, Banja Luka, Sarajevo, Osijek, Rijeka, Split, Zagreb, Podgorica, Skoplje, Doboj and Ljubljana who showed a commitment to join the journey together.

We asked each participant to map their community, utilizing a questionnaire that we designed together with the participants. The answers helped construct an identity card for each community, identifying its strengths and challenges.

Although the sessions were productive, the participants felt that it was not enough. They were eager to meet in person. Since the onset of the pandemic, they had not had a chance to do so. Moreover, we discovered, a training retreat for senior leaders from former Yugoslavia had not been held for several decades.

Nothing prepared us for the moving experience that we encountered: from uncovering the fascinating personal histories of each person, to admiring how they keep very small communities (sometimes less than 100 people) alive, to the high level of innovation and perseverance that they have demonstrated. The entire retreat rested on the able shoulders of the participants, empowering them to take ownership and agency and find solutions to problems with the help of their peers.

The magic happened. At the end of three intensive days, there was a strong sense of camaraderie and encouraging messages from the participants. For Aleksandra Stevandi? from Banja Luka, Bosnia and Herzegovina, it was the “excitement of new friendships and opportunities to work in our community in a different way.” For Ana Lebi from Split, Croatia, it brought back “loads of nostalgia — like a time machine,” as if she was “going back to my youth, attending a seminar, my batteries recharged, optimism and hopes aroused.” And for Dragana Stojanovi? from Belgrade, Serbia, “these were days full of inspiration, education, friendships and community bonds renewed.” Unanimously for all, the most powerful outcome was building connections among Jewish communities who share traditions, a language and culture but live under separate and sometimes conflicting nationalities.

So what are the next steps?

Finally, they will now be more connected to the global network for enrichment and continued networking.

In the Talmud (Bamidbar Rabbah, 13) it reads: “Like a candle lighting another, the first one is lit and second too stays aflame.” This is the essence of true networking. By learning and teaching, sharing and collaborating, JCC Global and its partners are committed to continue bringing light to each and every Jewish community in former Yugoslavia.

Smadar Bar-Akiva is the executive director of JCC Global — a network for more than 1,000 Jewish community centers.