On the eve of the midterms, antisemitism is front and center

With antisemitism on the rise, should American Jews be worried?

In some ways, the period after World War II felt like a Golden Age for American Jews. Appealing Jewish characters and entertainers gained wide popularity in film, theater and television; Jews entered professions that had been closed to them in record numbers, and one even ran for vice president on a major party ticket. In the aftermath of the Holocaust, overt antisemitism receded dramatically. Those of us who grew up in that era could easily have concluded that antisemitism would never again rear its head in this country.

Our parents and grandparents knew better. Many who grew up here had experienced bullying, housing discrimination, social ostracism, quotas and accusations of dual loyalty. Most remembered virulent, populist, antisemitic rhetoric from the likes of industrialist Henry Ford, aviator Charles Lindbergh and Catholic priest and populist leader Charles Coughlin (better known as Father Coughlin). Our immigrant and survivor forebears had experienced much worse. 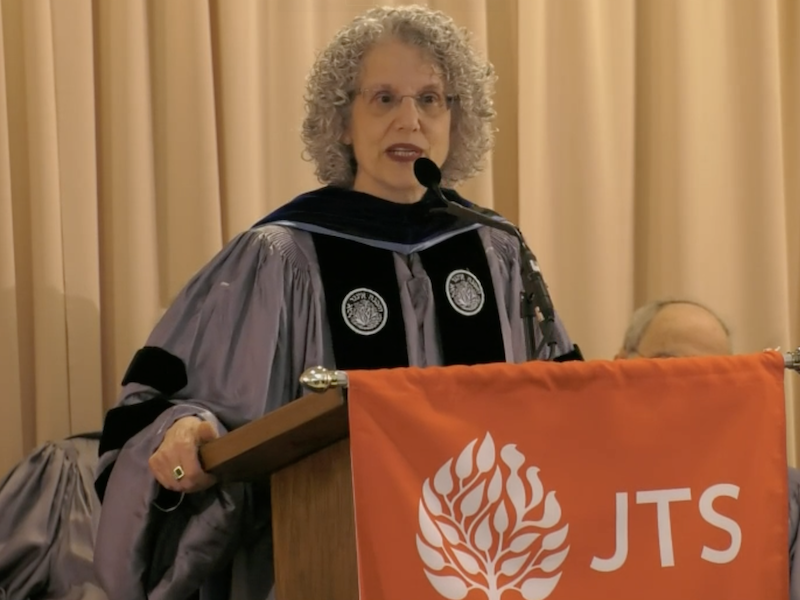 JTS Chancellor Shuly Rubin Schwartz speaks at her inauguration on May 17, 2022.

Sadly, antisemitism is out in the open again in the United States. Its tropes have found fertile ground in public discourse — in extremist media outlets, on social media platforms and among politicians who even a few years ago would have shied away from publicly uttering the kind of remarks that have now become commonplace. We see certain college campus groups eager to ostracize Jews who support Zionism in any way. In Pennsylvania, Josh Shapiro, an openly observant Jew running for governor, has been subject to attacks that employ barely veiled antisemitic accusations, with his opponent calling the fact that Shapiro’s children attend a Jewish day school “privileged, exclusive, elite” and an indication that Shapiro has “disdain for people like us.” And Kanye West, now Ye, a global celebrity, feels no remorse for his vicious verbal attacks on Jews.

Alongside the intensification of antisemitic rhetoric, we’ve witnessed a steady increase in the number of physical attacks on innocent Jews, some with deadly consequences. It is at precisely this season that we recall the horrific murder of innocent Jews at the Tree of Life Synagogue in Pittsburgh four years ago.

Should American Jews be worried? Has something significantly shifted in the United States harking back to earlier, darker times? I believe so. Truthfully, we all should be alarmed. For as history teaches, antisemitism serves as a canary in the coal mine. The late Lord Rabbi Jonathan Sacks wrote that antisemitism is about the inability of a group to make space for difference. And because we are all different, the hatred that begins with Jews never ends with Jews. Antisemitism has long been the world’s most reliable early warning sign of a serious threat to freedom and human dignity. Indeed, the inflammatory language of the past several years has not demonized Jews alone. It’s become commonplace to hear barely coded language used to debase and attack Blacks, Latinos, Asians, immigrants and more.

We must not ignore these warning signs. We must name antisemitism when we see it and never hesitate to combat this insidious hatred. Still, I hope we will balance our worries by appreciating the rights that Jews have had in America since its founding. Jews felt blessed by the unique freedom this country offered, beginning with the U.S. Constitution, which did not consider religion when granting full citizenship. This singular document automatically bestowed equal rights on Jewish men and afforded them an exceptional level of belonging in their new country. (Of course, the Constitution would not deal with race, or gender for that matter, until much later.)

One story epitomizes this sense of belonging for me: When the Constitution was ratified in 1788, Jews joyfully participated in public celebrations. The biggest took place on July Fourth in Philadelphia — then the capital of the country. The parade included ministers marching arm in arm. And though there were no rabbis in the country yet, a hazzan proudly marched alongside his fellow clergymen. Naphtali Phillips, one of the children at the event, later described it in a letter, making special mention of the food served to the marchers at the end of the parade: “There was a number of long tables loaded with all kinds of provisions, with a separate table for the Jews who [for religious reasons] could not partake of the meat from the other tables; but they had a full supply of soused [pickled] salmon, bread and crackers, almonds, raisins etc. This table was under the charge of an old cobbler named Isaac Moses.”

Kosher food at the celebration so that Jews could eat alongside other marchers! The symbolism here never ceases to move me. Jews in the very heart of the country simultaneously stood comfortably as both Americans and as Jews.

As American Jews, we hold these truths in tension with one another. And at this moment, with the midterm election cycle drawing to a close, this awareness reminds us to exercise our right to vote. For the election results, I believe, will impact the future of antisemitism in the United States, the ability of all those “not like us” to live freely and peacefully, and the right to make our voices count through the democratic process. Just as the Jews in Philadelphia marched proudly when the Constitution was ratified, let us never take for granted how fortunate we are to have freedom as American citizens. May we always cherish that privilege and wisely exercise that responsibility.

Shuly Rubin Schwartz is the chancellor of The Jewish Theological Seminary and Irving Lehrman Research Professor of American Jewish History.