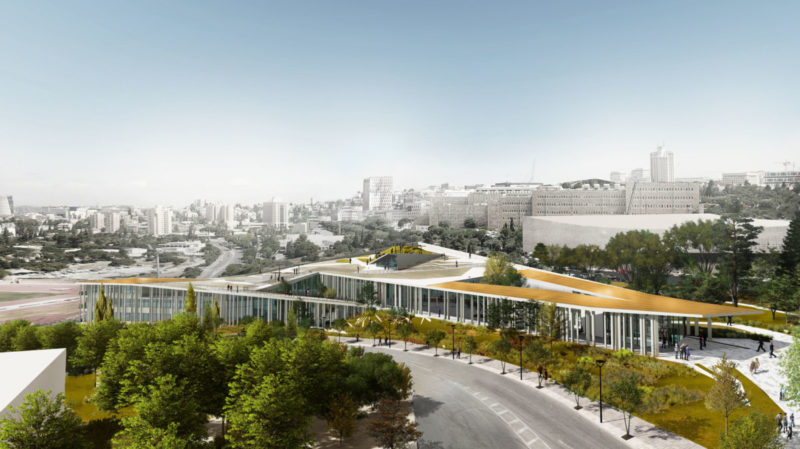 Academy of the Hebrew Language

As the keeper of Hebrew’s historical dictionary and its creator of new words, the Academy of the Hebrew Language in Jerusalem, housed on a university campus and open to laypeople, has long been the domain of scholars, and not created with the public in mind.

But now, after establishing itself on social media with a half-million followers, the academy is determined to shake any dust off its image by welcoming the public in-person to a new building it plans to construct in the “National Quarter,” home to Israel’s central institutions, such as the Knesset, the parliament building, the Israel Museum and the Supreme Court.

“We were in a small place. We had a big success on social media,” Dorit Lerer, a deputy director at the academy, told eJewishPhilanthropy, including an Instagram account with 167 thousand followers. “But we wanted to reach the public face-to-face. We wanted to emphasize our national importance. [Plans for the new building] all came together.”

Founded in 1953 by the Israeli government, the academy replaced the Hebrew Language Committee established in 1890 by Eliezer Ben-Yehuda, the Belarussian-born lexicographer who led the revival of Hebrew as a spoken language. The government located it on Hebrew University’s Givat Ram campus in central Jerusalem, which is near the National Quarter but not part of it.

The academy convinced the government about nine years ago that its rightful place was in the National Quarter after Moshe Bar-Asher, its president, told him that other countries’ academies were located “at the center of every capital,” Bar-Asher said.

The planned building, which won an architectural competition and will also include a museum, inspired the academy to create a new word for its new space. It will be called the Minveh, said Bar-Asher. It’s derived from the word naveh, which as a noun means home, and as an adjective means beautiful, and constructed on the same grammatical pattern as machaneh (camp) and mitzpeh (observatory).

“The building invites the public to wander,” said Udi Kassif, co-founder of the firm that designed the building, Mayslits Kassif Roytman. “Go up, go down, observe the scenery, then go back into the museum. Listen to a debate. Everything is transparent,” except for the research and administrative areas.

At nearly 100,000 square feet, the Minveh will be able to welcome more than 200,000 visitors annually, and will cost an estimated $50 million to build. The academy has drafted an initial budget and will be preparing a more detailed plan over the next few months, after it selects the project manager, said Sarit Harel-Mimran, the academy’s resource development manager.

It has received about $600,000 from the Jerusalem Municipality and the World Zionist Organization to fund early planning, but the project has no firm funding commitment from the national government due to delays caused by multiple elections and the pandemic, she said.

The academy will not need to buy the land, she added.

Michael Jaffe is a fundraiser who as a principal at the firm Mersky, Jaffe & Associates has worked with several American nonprofits whose mission is to raise money for Israeli organizations. He said he believes the Academy of the Hebrew Language’s mission will resonate with American philanthropists if it puts in place passionate, informed lay leaders and appropriate staffing.

“We are celebrating; we aren’t complaining. Hebrew is great, slang is great, the influence of other languages is great, it proves that Hebrew is a living language, but we also want people to know that it happened in history — people stopped speaking Hebrew.”

The museum in the new academy building will help to tell this story, and in the sections dedicated to scholarship, experts will be working to support Hebrew in various ways, from creating new words to making sure the newest computers and software are compatible with Hebrew.

“A language cannot live without people using it, without people understanding its impact on their lives and their identities,” said Harel-Mimram. “We will make sure that its revival is ticking, and updated all the time.”