Mishkan Chicago: The growing pains of a synagogue startup

Mishkan Chicago was founded on the idea that our ancient tradition could be a relevant and meaningful source of comfort, inspiration and justice for the modern world. Guided by the principle of radical inclusivity, we became the spiritual home for many who had felt marginalized by institutional Judaism: LGBTQ+ folk; interfaith families; progressive activists and community organizers; people with complicated feelings about Israel and Palestine; individuals exploring Jewish spaces for the first time; and more.

One of the climactic moments of the Torah comes at the end of the book of Exodus when, after a long process of assembling the materials for and constructing the mishkan, the presence of God comes to fill this sacred meeting place that the Israelites have created in the center of their camp. One could make a compelling case that we should end the story here. From the middle of Genesis to the closing chapters of Exodus, our ancestors have transitioned from a small, extended family to a relatively large, multiethnic people – a “mixed multitude” that has journeyed from slavery, to redemption, to revelation. It’s a good (and happy) ending. Yet the Torah contains another three books, whose narrative arc will carry us through forty years of wandering in the wilderness. As Exodus closes with God inhabiting the mishkan, Leviticus continues with the Israelites navigating the rules and regulations that will allow them to peacefully coexist with this Divine presence in their midst. This is the step after “If we build it, they will come.” The mishkan has been constructed. The people are present. God is present. Now what? 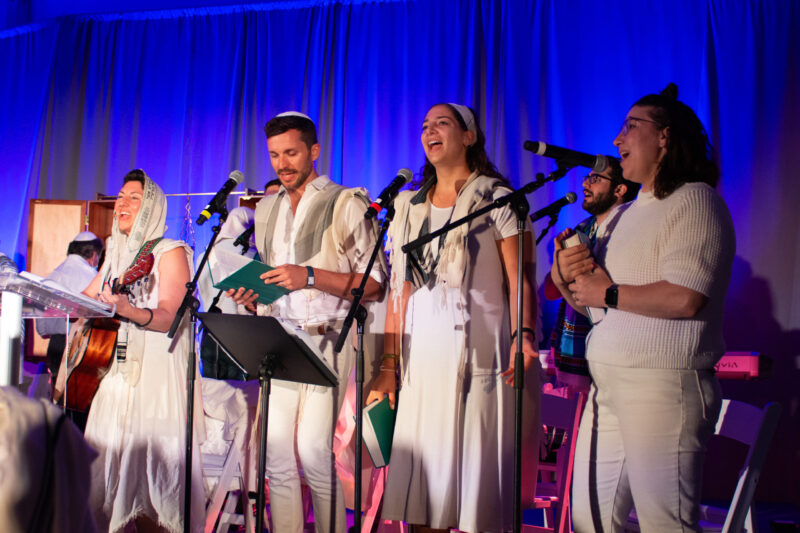 Ten years ago, I was asked to help build another kind of sacred meeting place for Jews and their loved ones. Mishkan Chicago was founded on the idea that our ancient tradition could be a relevant and meaningful source of comfort, inspiration and justice for the modern world. Guided by the principle of radical inclusivity, we became the spiritual home for many who had felt marginalized by institutional Judaism: LGBTQ+ folk; interfaith families; progressive activists and community organizers; people with complicated feelings about Israel and Palestine; individuals exploring Jewish spaces for the first time; and more. Our first Friday evening service was held in a living room. Within a few years we had moved from people’s homes, to bars and social halls, to 1,000-seat theaters. We had built our own mishkan, a mobile space for people to come together and encounter the sacred in a new way. We moved into the next chapter of our communal story, a Levitical process parallel to the one outlined in the Bible as the Israelites wandered in the wilderness. We had to create the rules and regulations that would sustain us through the journey ahead.

During this time I served as a chair schlepper, graphic designer, thought partner (with our founding rabbi, Lizzi Heydemann), and our first leadership fellow, an internship that gave me the opportunity to develop my skills as a service leader. As the community developed, my role necessarily changed to match its needs and my interests as an aspiring clergy member. I also watched as Rabbi Lizzi shifted her focus from the hands-on execution of services, events and programming to fundraising, staff supervision and maintaining the vision of Mishkan as an increasing number of people offered their input on how and in what direction our community should journey. I remember an early conversation with her, as we wrestled with what it meant to be a radically inclusive community that welcomed people with varying – often very strong – opinions. We realized that people were not showing up so Mishkan could be everything to everybody, but rather they were inspired by the vision of a bold and vibrant Judaism that had motivated Rabbi Lizzi to found this community.

In 2014, I left Chicago to attend rabbinical school. I studied at the Jewish Theological Seminary; although I had always belonged to unaffiliated communities, many of them were led by individuals educated in the Conservative Movement. While a student, I had the blessing of serving as a rabbinical intern for Congregation Beit Simchat Torah, the LGBTQ synagogue of New York City. This was also an institution that was founded on the idea that people should not have to leave parts of themselves at the door when they entered the sacred space of Jewish community. I was inspired to carry this work into my first job as the rabbinical fellow of Park Avenue Synagogue, where I led efforts to affirm LGBTQ+ folks, interfaith households and all people seeking a place in our pews.

When I was asked to come back to Mishkan last year to serve as their third rabbi, we had transformed from a volunteer-driven startup to a community of over 600 households with a full-time staff of 15 people. We have a Mensch Academy, a vibrant and dynamic educational program for 115 children aged 3-13. Our Builders (what we call our members, in keeping with our vision of a collaborative, people-focused community) include people throughout Chicago, across the country, and – in a few cases – outside of the United States. Over the past few years, we have developed the institutional structures and communal norms that have helped us maintain this sacred, Jewish community.

Being away from Mishkan for seven years and now returning as a member of the rabbinic team allows for a unique vantage point. There has been phenomenal growth, both in terms of numbers of people and in terms of the quality of the programming. But I also see what gets lost in the process of such dramatic growth.

It is exciting to talk about numbers, but the Levitical process of building a community makes for less sexy headlines. Mishkan had  to tackle the challenge of becoming a financially viable institution. That includes paying attention to fundraising; having the people who benefit from the communal program contribute to the institution’s budget; developing a thoughtful and fair compensation policy for all employees, and much more. Mishkan crafted a clear anti-harassment policy as well as a strategy to insure diversity, equity and inclusion in its hiring practices. Board bylaws had to be written, revised and instituted. Crafting these policies and putting in place well thought out systems have allowed Mishkan to expand its capacity to accommodate more people seeking the sacred space that we offer.

Of course, success cannot only be measured in terms of institutional development. When I reflect on how Mishkan has grown over the past ten years, I think about the people who have found their home here: individuals who felt that the Jewish community lacked spaces where they could bring their whole selves. What has changed with the growth of our community is both longevity of experience and points of access. By the former, I mean individuals who first came to us as single 20-somethings and have since found partnership, had children and are enrolling their kids in the Mensch Academy.  Or folks in the middle of their careers who are now spending their time in retirement, taking classes and serving on our board. These individuals have not only found a comfortable home for themselves in Jewish community thanks to the existence of Mishkan, but they have also come to appreciate the value of a sacred community which now accompanies them through the challenges and celebrations that come over the course of time.

I am particularly proud of the people who, inspired by their time at Mishkan, have continued to engage in Jewish community even after they have left Chicago. We have folks serving on boards and committees across the country, who began their Jewish journeys here.

Of course, there are moments when I miss the hamish, ad hoc, nature of those early services. There is a romanticism to the late nights putting together a program, schlepping mismatched chairs into someone’s living room, and creating sacred space in unexpected places.

Yes. Our numbers have grown; our institutional capacity has expanded; and what we offer has become more professional. But I, along with other lay and professional leaders at Mishkan are proud of the fact that we have not lost what allowed us to build this mishkan in the first place: our vision of what Judaism can and should be, derived from the core narrative of our tradition. That sacred space is created when each of us brings what we are able, when each of us is welcomed in the fullness of who we are–a unique and irreplaceable reflection of the Divine image.