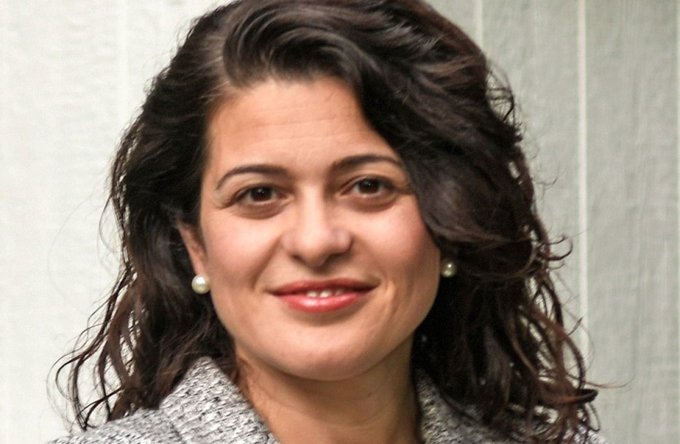 Today, Marina Yudborovsky is CEO of Genesis Philanthropy Group (GPG) — a global philanthropy with offices in Israel, Russia and the United States that funds in those countries, and in Germany, Spain, the United Kingdom and across the former Soviet Union.

But long before that, she was an enthusiastic counselor at a Jewish day camp in Queens. A little too enthusiastic for her parents, engineers who had similar professional aspirations for their daughter. They had immigrated from Ukraine in 1989 when Yudborovsky was 9 years old, and settled in Queens.

“When we moved here, they cleaned houses, and that’s what life was like. It was a wonderful life. I didn’t suffer,” she told eJewishPhilanthropy in an interview charting her course from camp to technology consulting to her current role, which she assumed in July after the death of her mentor, Ilia Salita, the group’s former president and CEO, from cancer in June.

Part of Yudborovsky’s wonderful life was the Central Queens Y, whose day camp Yudborovsky attended as a child with financial help from the UJA-Federation of New York. She loved it so much she became a counselor.

“I worked there way longer than anybody thought was reasonable. My parents should have known at that point what direction things were going to take,” Yudborovsky said.

At the time, though, neither Yudborovsky nor her parents understood the role Jewish philanthropy was playing in their lives. They associated being Jewish with the discrimination they had suffered in Ukraine; it meant challenges, and the need to be discrete. “I hadn’t put it together in my mind yet how much that sense of community was about being Jewish,” she said.

A Birthright trip in 2004 was a turning point. She met a staff member who revealed that trip alumni could also become staffers. “I can be a camp counselor again!” Yudborovsky recalled her reaction. “Where do I sign up?” Through that connection, she ended up staffing eight Birthright trips, meeting her husband, who is Israeli, and getting the job that brought her to GPG. After graduating from New York University, she worked as a technology consultant in both the private and nonprofit sectors. GPG gave her a six-month contract to set up its  U.S. office, in New York City, and she never left. She served as director of strategy and operations, oversaw the implementation of GPG’s global grant evaluation system and was elected unanimously by the board to serve as CEO. Founded in 2007 by a group of Russian billionaires to support Jewish identity among Russian-speaking Jews, its principals today are Pyotr Aven, Mikhail M. Fridman, Gennady Gazin and German Khan, Yudborovsky said. (Some of the same men also created the million-dollar Genesis Prize in 2012, but it is a separate entity.)

“Marina is the consummate professional,” said Winnie Sandler Grinspoon, president of the Harold Grinspoon Foundation. “She has a clear eye for impactful and effective strategies to inspire the next Jewish generation,” adding that Yudborovsky is also a great person to be seated next to at a dinner party — funny, approachable and interesting.

Yudborovsky and Salita bonded over their shared status as outsiders to the Jewish professional world; he’d come from academia. She observed over the years that he was extremely involved in the details of their work, but that he also had the ability to step back and look at the big picture. “I have a tendency to get into the weeds,” she said. “I tumble down there naturally.” Yudborovsky feels Salita’s influence in her efforts to emulate this aspect of his management style: “It’s a work in progress. If you asked me if I’m as good as I’m going to be, I’d say I hope not.”

Under Salita, GPG hewed to its original mission of serving Russian-speaking Jews, funding such programs as Limmud FSU, a Jewish culture and education festival, and PJ Library, the free-book program for Jewish children GPG brought to the former Soviet Union. GPG has funded Russian-speaking living spaces in the international Moishe House network of housing for young Jews. That work is still central to the mission, Yudborovsky said.

As she settles into the job, however, she knows the Russian-Jewish community is in a very different place. When she started at GPG 12 years ago, people often told her that Russian Jews should just become “regular Jews” already. She hears that far less now.

“We’ve evolved from thinking about the melting pot as the ultimate ambition,” she said. “It’s not about everyone being the same. It’s about the tent becoming bigger.”

“The GPG has been a transformational force, not only in the Russian-speaking Jewish community but in the Jewish world,” said Andres Spokoiny, CEO of the Jewish Funders Network. “Ilia took the GPG to amazing heights. Marina is an embodiment of all that GPG seeks to create: committed, thoughtful and passionate leaders that serve as bridges between worlds.”

Russian-speaking Jews have taken their own place at the global Jewish philanthropic table. Salita expanded GPG’s ambitions to include Israel-Diaspora relations and Jewish life in the United Kingdom. Right before the pandemic, GPG established itself as a funder of the Jewish community in Spain. During the pandemic, GPG made COVID-related grants in France, Athens and Romania.

The foundation’s most recent announcement — of the Ilia Salita Award for Excellence in Applied Research, made on Wednesday at the Jewish Funders Network annual conference — is characteristic of its approach to philanthropy and to Salita’s vision for the foundation, Yudborovsky said.

“It’s a tribute to him, and it speaks to the kind of foundation that we are,” she said. “It’s that rigor. Research and data combined with empathy.”