Among the solutions the mayors discussed, Roytman Dratwa said, were increasing focus on interfaith work, education against hate in schools and training law enforcement to address hate crimes. 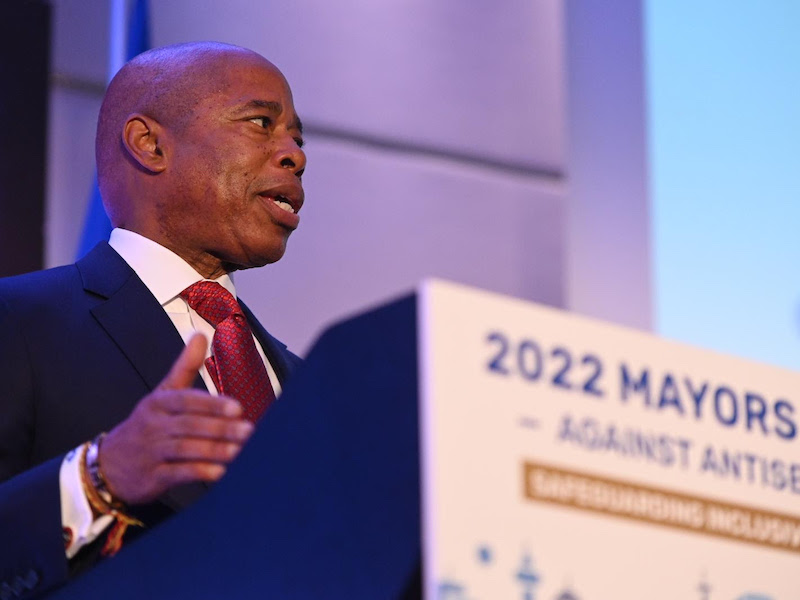 Eric Adams speaks on Wednesday at the conference.

In August 2022, the NYPD tallied 24 hate crimes against Jews in New York City — more than double the figure from the previous year and 40% of all hate crimes counted that month. The rate of anti-Jewish hate crimes also rose slightly, year over year, in September and October. It was against that backdrop that Eric Adams appeared at a conference in Athens this week gathering mayors from across the globe to discuss antisemitism.

Adams, New York City’s mayor, was the highest-profile attendee of the conference, which brought together representatives of more than 50 cities across the globe — about half of them mayors — Wednesday and yesterday. The conference was run by the Combat Antisemitism Movement and the Center for Jewish Impact, along with the Jewish Federations of North America, and was the first of its kind to meet in person. Last year’s was virtual and was livestreamed, unlike this year’s, though videos of speeches from this year’s conference have been uploaded to YouTube.

The conference was an opportunity for the mayors to discuss the challenge of antisemitism and brainstorm ways to fight it, CAM’s CEO, Sacha Roytman Dratwa, told eJewishPhilanthropy. The conference and movement’s main funder is Adam Beren, a Kansas oil and gas entrepreneur who has donated to a range of Jewish and pro-Israel groups and Republican candidates. Roytman Dratwa declined to share the conference budget.

“The city is the closest ally… that can really work on this issue,” Roytman Dratwa told eJP. “Jews are living in cities, so the government on the national level is not so close to the day-to-day [lives] of the citizens but the mayor and the cities are dealing with the day-to-day life of the citizens.”

Among the solutions the mayors discussed, Roytman Dratwa said, were increasing focus on interfaith work, education against hate in schools and training law enforcement to better address hate crimes. New York City has pursued initiatives in all of those areas in recent years, and Adams, who received CAM’s Civic Leadership Award, hit on many of those points in his acceptance speech on Wednesday.

“We’ve allowed it to normalize in every part of our lives, we’ve become accustomed to it, it’s become popular,” Adams said of antisemitism, citing a recent arrest of two men who plotted to attack a New York City synagogue. “We don’t realize it but we are a segregated people. We’re hardwired to only coalesce among those that look like us, talk like us, eat the same food, do the same things, speak the same language. It’s time to break free of that.”

Roytman Dratwa, and Adams in his speech, both noted that antisemitism today is driven in part by social media, whose regulation is not mayors’ purview. “Social media is the flame that continues to fuel the hatred that you are seeing,” Adams said.

“It’s not enough to work on the city level,” Roytman Dratwa said. “What is possible is for mayors to use social media in a positive way.”