As Chancellor of The Jewish Theological Seminary, I recently had the opportunity to visit Israel on a Masorti Movement mission. While there, the mission participants met with talented and devoted leaders of the Zionist movement and Masorti institutions and congregations, discussing common concerns and objectives and charting the course forward to achieve our goal of a vital, pluralistic Judaism in a thriving, democratic State of Israel.

During the visit, we were privileged to meet almost a dozen government ministers and Knesset members and to hear their visions for this new government, which has now entered its second month. The ministers and MKs encompass a broad spectrum of Israeli opinion and differ—sometimes vehemently—on many critical issues. The new government is comprised of a fragile coalition of disparate parties. And yet, we heard from them a shared sense of purpose on a number of issues. They are eager to effectuate changes that would improve the lives of all Israelis, including Arabs, and Palestinians; promote pluralistic Judaism in Israel; combat climate change; reinvigorate the democratic process; and improve ties between Israeli and Diaspora Jewry. So many recognize how imperative these goals are not only for the sake of those whose lives are most directly affected but also for the future health of Israeli society as a whole. All of the participants were deeply inspired by their views and left the meetings feeling a great sense of hope and offering fervent prayers for their success. 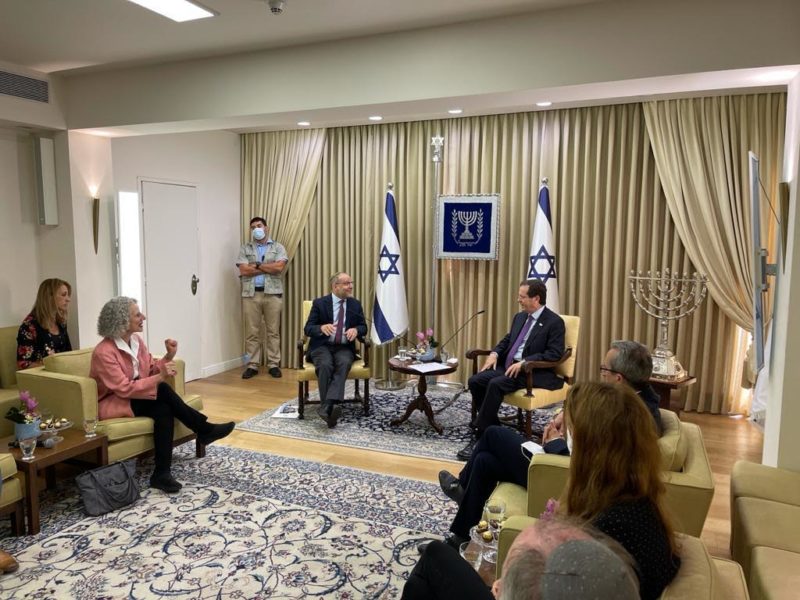 A special highlight of the trip was meeting with the new president of the State of Israel, Yitzhak Herzog, whose long record of achievement in many of these areas is one that we deeply admire and honor.

On Thursday, we prayed at the “Kotel Ha-mishpahot,” the family wall—where I last prayed two years ago at the bar mitzvah of my oldest grandson. This moving, egalitarian prayer experience reinforced yet again how vital it is to ensure that the Kotel remains a place where all Jews—regardless of gender—can gather together to pray undisturbed. Sadly, religious agitators had already begun their efforts to disrupt such egalitarian tefillah, setting up a mehitzah each evening to disrupt egalitarian prayer. This culminated in a concerted campaign on the part of hundreds of right-wing Orthodox Jews to overtake the space on Tishah Be’av, disrupting prayer and the chanting of Eichah. The irony of this deliberate demonstration of baseless hatred on the evening where we commemorate the destruction of the Temple, which tradition attributes to baseless hatred among Jews, makes this violation all the more egregious.

This despicable action reinforced the urgency of the mission. The agreement to codify and expand the egalitarian prayer space approved by the previous government must be implemented immediately. As we learned, many members of Knesset support this initiative—several participated in the Tishah Be’av egalitarian prayer at the Kotel Ha-mishpahot. All those who value the goal of ensuring religious pluralism in Israel must make their views known to the new government to strengthen their resolve to act on this without delay.

As we begin the post-Tishah Be’av period of comfort and consolation, we read the words of Isaiah, “Clear in the desert a road for the Lord! Level in the wilderness a highway for our God.” Pluralistic prayer has been in the desert for far too long. During these seven weeks of consolation, let’s make permanent the highway to God at the Kotel Ha-mishpahot. May the moments of uplift that our mission experienced prove to be harbingers of much needed change toward justice and inclusion.