As a cantor, the pandemic threw pieces of my profession and my spirit into a tailspin. I yearned for the return of live music and robust concertizing. I missed the kind of night that goes on the calendar with eager anticipation.

Jewish music is a little too accessible these days. Think of it like hummus: once only available in specialty shops, now it can be found just about anywhere. At the beginning of the pandemic, that access was a welcome salve for the pain of isolation. By mid-2021, it was hard to get excited about another online music gathering. Is a Facebook event really an “event” if you can scroll past it the same way you dismiss your college roommate’s life updates?

As a cantor, the pandemic threw pieces of my profession and my spirit into a tailspin. I yearned for the return of live music and robust concertizing. I missed the kind of night that goes on the calendar with eager anticipation. That feeling was ignited once again last June when I called seven talented sacred music-makers from across the country and invited them to join me in a concert as part of the fourth annual Kol Tefilla Shabbaton in February 2022. It seemed a lifetime away, and for each of us it was a source of necessary optimism driving us through the throes of uncertainty. 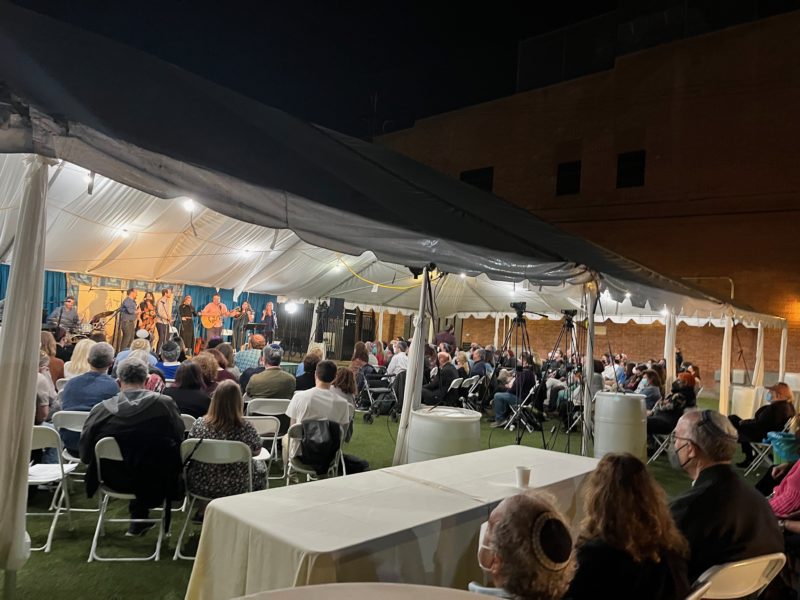 The concert was an unmitigated success, particularly as it highlighted the dividend earned by a people that invests in Jewish music at every level: in our cantors; in producing new music; and in the willingness of music-lovers around the country to pay to play.

When I joined the staff of a 900-plus-family synagogue about a decade ago, I followed the advice of a dear mentor: learn the budget first. The financial operations of an institution reveal much about its organizational priorities. I already knew something about Temple Beth Am that had sold me on taking the position in the first place: They sought to emplace a cantor, an invested hazzan of the Cantors Assembly, at a time when sister institutions were readily embracing “musical rabbis.”

With a cantor on board the senior staff, the community was assured someone whose full-time vision was and is the security of an authentic Jewish musical legacy. Weaving threads throughout the institution, I ensure that the havdalah melody our Jewish learning community students sing around a flickering candle on Sunday morning is applied to the text of L’dor Vador the next Shabbat morning. I might teach a melody for Min Hameitzar on Wednesday night at a weekly mindfulness class, and when terror strikes in Colleyville, I reprise that familiar melody to hold the community in solace.

We are a fluid senior staff, a multi-talented conglomerate of singers and writers and lovers of Torah. Our strength is in our teamwork, and in the humility of the leadership therein. My partnerships with Rabbis Adam Kligfeld and Rebecca Schatz are invaluable. But I could not do some of the most beautiful parts of my work if it were not for the singular dedication this community has to the role of cantor, and to honoring my craft.

There are more congregations seeking full-time clergy in the Conservative movement than there are cantors on placement, and fewer rabbis than ever are looking for pulpit work. In this moment of reawakening, communities have a chance to invest in cantors who will make spiritual well-being the center of their service.

Several years ago, I began a musical chevruta with my local colleague, Cantor Lizzie Weiss. We noticed two patterns emerging in the world of sacred performing artists. Often we were solicited by artists who planned to travel to our region and hoped that several communities might feature them in concert. And second, Jewish artists almost universally funded their albums through the pathway of crowdsourcing. Cantor Weiss and I wanted to develop a program that would both tackle the messiness of calendaring artists on tour and at the same time leveraged the crowdsourcing approach to fundraising.

In 2018, we introduced the Sacred Sounds Unbound concert series. Our neighboring synagogues, one Reform and one Conservative, would jointly produce concerts at alternating locations. We would pay the artists by way of donating to their albums at a level that bought us a concert. Since we launched, we have financially contributed to the production of the albums of such artists as Rabbi Josh Warshawsky, Rabbi Ariel Root Wolpe, Deborah Sacks Mintz, Chava Mirel, Elana Arian, Rabbi Yosef Goldman, all of whom were featured artists at the February 12 Kol Tefilla concert. On the night of the Kol Tefilla concert, we announced that we are contributing to Rabbi Micah Shapiro’s album, as well.

Both Cantor Weiss and I consider the work of Sacred Sounds Unbound to be an extension of the age-old tradition of commissioning new Jewish music. These artists write some of the music we most love to pray, and without cantors and communities turning and investing in them, we might not have these holy tunes.

After years of COVID-dampened musical experiences, what I wanted most was to get this concert to as many ears and eyes as possible. My gut instinct was to seek a broad and accessible platform, straight to social media, but that came with two related issues: How would we collect data, and by what means would we collect any revenue? We found direction through collaboration: Cantors Assembly, Rabbinical Assembly, United Synagogue of Conservative Judaism, and Hadar’s Rising Song Institute. Each of our organizations was well-versed in the use of platforms like Zoom webinars (which would allow us to collect data) and Eventbrite (which would allow us to also collect revenue), but we wanted a platform that would allow us to do both. This required a collective leap to a platform outside social media, one where we would have to work together to drive traffic. We felt this was a risk worth taking for the sake of setting this concert experience apart from the average Facebook Live event. We were in good company taking a healthy risk: The Cantors Assembly, for example, pivoted radically at the start of the pandemic, offering direct-to-consumer online programming and moving for the first time beyond direct service to their members. 13,000+ emails later and growing, they saw a key market hungry for Jewish music, and we were hungry to follow in their successful footsteps.

We selected Mandolin as our platform of choice, which allowed us to stream our concert experience for a few hundred dollars onto a platform that managed sales, data collection, production and even chat features. $10 per ticket felt like too little, and too much; the price point was an utter guess and any revenue we garnered from online sales was going to be a win as we would not be reliant on that revenue. When we announced plans for ticketing, we were surprised to hear from synagogue communities around the country who wanted to provide the concert experience to their congregants for free; could they do that, they asked, for a fee? We invented a sliding scale and a dozen congregations, then more, responded. All in all, more than 530 screens tuned in live, and more than 700 viewers have purchased tickets as the concert is still available.

As I stood in the back of the tent that night, kvelling with Temple Beth Am’s ritual innovator, Cantor Michelle Stone, I watched the audience pour into their seats. There were the hundred plus Shabbaton attendees, and another fifty congregants who had pre-purchased tickets. As the Omicron surge simmered in the rearview mirror, I was surprised to see a line snaking out the gate to buy $35 tickets at the door. Stepping back from the tent, the stage, the event as a whole, I could say that we set this concert at a high value, and the response was a hearty embrace of that merit, that beauty. Every roar of applause was a resounding affirmation of a theme that emerged from countless Shabbaton conversations: This was exactly what we needed, even when many of us had no idea this was what we needed.

I believe in the power of ritual: routine, elevated. It is the elevation of the cantor, of new music, of the art of the concert itself that will ultimately lift all of us in turn. When we declare these pieces of our tradition to be valuable, that is how they will be embraced.

Cantor Rabbi Hillary Chorny is the cantor at Temple Beth Am in Los Angeles, CA where she lives with her husband and their two kids, Ella and Yossi. She is an avid writer, and she proudly serves as an officer of the Cantors Assembly, on the advisory board of the Jewish Sacred Music Foundation, and as an instructor at the Ziegler School of Rabbinic Studies.