How ‘GirlWithNoJob’ raised $50,000 on Instagram for Holocaust education in one day

"I had a feeling once the interview came out, people would be so taken with Mark and his story and they would be like, ‘What can I do to help?” Claudia Oshry said. 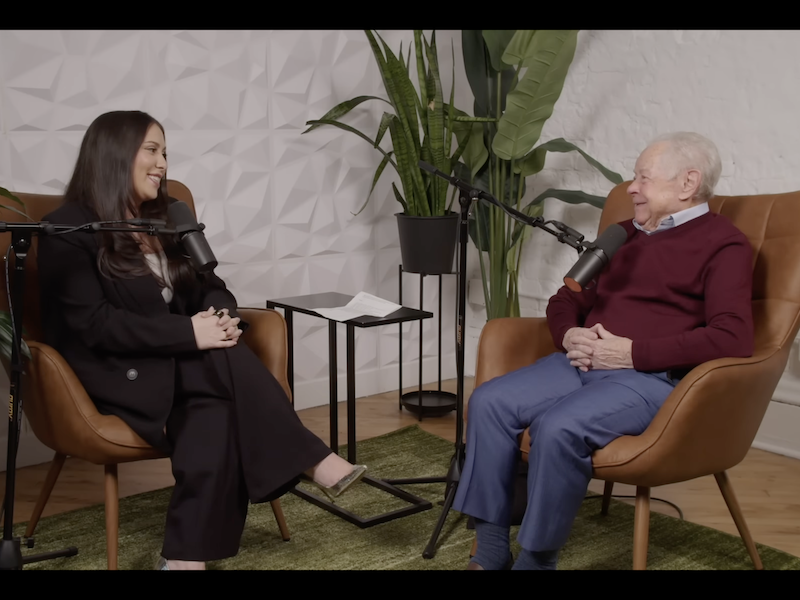 On her Instagram feed, which boasts more than 3 million followers, Claudia Oshry, aka “GirlWithNoJob,” usually documents her personal life, pop culture and other topics that appeal to her audience, which is mostly made up of millennial and Gen Z women who live in cities such as New York or L.A.

But as of Wednesday afternoon, Oshry’s most recent post featured a different offering: an interview with Mark Schonwetter, who survived the Holocaust by hiding with his mother and sister in the Polish forest. In the interview, which has been viewed close to a million times, the 28-year-old influencer and the survivor discussed his memories of living in hiding, how he remains optimistic and his annual tradition of frying latkes with his family.

“The video was essentially meant to be more inspiring than getting really dark,” Oshry, who also hosts a podcast with her sister, told eJewishPhilanthropy on Wednesday. “A great way to not eliminate, but hopefully diminish a lot of the antisemitism and hate that’s being perpetuated in the culture right now is by Holocaust education.”

The post has racked up likes and positive comments, but one result that Oshry didn’t expect was for her two-minute video to become a boon for Schonwetter’s eponymous foundation, which funds Holocaust education in public schools. Seeing the response to the video, Oshry decided to put a link to a fundraiser for the foundation at the top of her profile. Within the first 24 hours, it raised more than $50,000 from more than 1,800 donors, with an average donation of roughly $27.

“A lot of the time, people who listen to my podcast from all over the country are really not even familiar with Judaism,” Oshry said. “Listening to the podcast is their first interaction with a Jew. So I take that responsibility very seriously, and I had a feeling once the interview came out, people would be so taken with Mark and his story and they would be like, ‘What can I do to help?”

The video is part of a series, called “Eight nights, eight stories,” produced by Daniella Greenbaum and Rachel Kastner, that recruited eight influencers and celebrities to post Jewish content during the eight nights of Hanukkah. Kastner and Greenbaum were also producers on a series of videos about the Holocaust by influencer Montana Tucker.

“It is celebs, and increasingly content creators on Instagram and TikTok, who make the biggest impact,” Greenbaum told eJP. “When confronting rising hatred against Jews, or any other societal ill, it is these voices that can make the biggest difference.”

Asked by Oshry about the importance of teaching young people about the Holocaust, Schonwetter said, “If we teach the young generation that we don’t want to live in hatred and we don’t want to create hatred between us, then maybe we will avoid the hate.”