A $5 million gift from philanthropist Omri Dahan will create the Harvard Chabad Endowment for Jewish Leadership, a rare endowment fund for a campus Chabad. 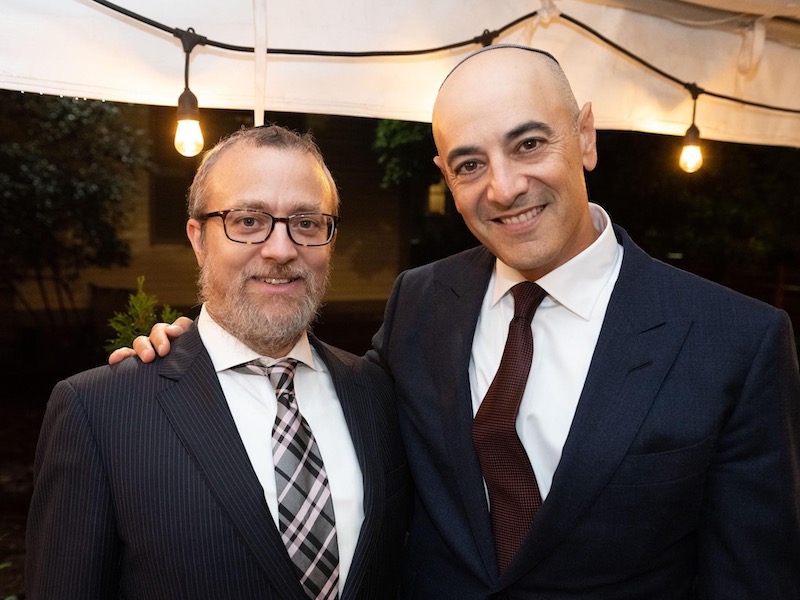 Rabbi Hirschy Zarchi’s path to leading one of the largest campus Chabad operations in the country started like that of so many of his fellow Chabad emissaries: standing at a busy intersection on Friday afternoons, with tefillin and Shabbat candles, asking passersby if they were Jewish.

Three decades ago, he would set up a table in the bustling Harvard Square in Cambridge, Mass., flagging down passing students. There was no Harvard Chabad at the time, but students would stop and chat with him, making a blessing and discussing plans for the Shabbat ahead.

“These were very driven, ambitious Harvard students,” Zarchi told eJewishPhilanthropy in a recent interview at the campus Chabad house. “There were kids wandering here, literally wandering, and not only open, but in some cases actually looking and hoping to develop Jewishly, and to learn more and to nurture a quest of some kind.”

In September, 25 years after Zarchi and his wife Elkie established a Chabad center at Harvard, they received a $5 million donation that will become a rare endowment fund for a campus Chabad, called the Endowment for Jewish Leadership. The gift came from Omri Dahan, a Bay Area-based Harvard Business School alum who has held executive positions at several successful startups, and his wife Jackie.

The donation will endow Zarchi’s position and establish the Dahan Fellowship for Leadership, a yearlong leadership and educational program for Jewish students. A pilot program this year will include up to six fellows, but Dahan hopes that in a decade, there will be “several hundred fellows who’ve gone through this program.”

“I’m not looking for a new job. The grass isn’t greener anywhere else,” he said. “Failure is not an option. We’re not going anywhere.”

Dahan’s donation is the largest single one-time gift to Harvard Chabad, which has an annual operating budget of roughly $9 million. To formally announce the endowment, Dahan moderated a conversation with Harvard emeritus professors Alan Dershowitz and Ruth Wisse, as well as Jewish philanthropist and Harvard Chabad donor George Rohr, in September.

Since they arrived in 1997, the Zarchis’ domain has grown from the classic campus Chabad house setup — a mom-and-pop operation that hosts Shabbat dinners and offers other religious and social events for students — to an empire of sorts, with three other Chabad centers for students, four preschools and a new Jewish day school that will soon run from kindergarten through second grade.

“I don’t think that you can call us just a campus Chabad,” said Elkie Zarchi, who is the head of school at Preschool of the Arts, which has 215 students — many of them the children of Harvard graduate students, alumni or faculty — in day care through pre-K at locations across Cambridge. “It just feels like a full circle. It just feels like you’re dealing with the same community at different ages and stages in their life.”

The Zarchis also oversee the campus Chabad house at the Massachusetts Institute of Technology; a Chabad center at Harvard’s medical campus in Boston; and the International Jewish Student Center, which caters to Jewish students, primarily from Latin America, who go to other area universities like Babson and Bentley. They also helped establish Chabad houses at nearby Tufts and Brandeis Universities after students from those schools came to Harvard for Shabbat.

When the Zarchis arrived in Cambridge, they were the same age as the students they would be serving, and their goal was only to provide another option beyond the campus Hillel for Jewish Harvard students looking for a meaningful Jewish connection. They covered costs on credit cards they couldn’t afford, and at first Zarchi took no salary. (He attended Orthodox services at Harvard Hillel for the first several years he was on campus to avoid alienating the existing Jewish community on campus, Sue Fishkoff writes in her 2003 book about the Chabad-Lubavitch movement, The Rebbe’s Army.)

At first, the Chabad attracted primarily graduate students, a community that was generally not active in Hillel, which is viewed at Harvard as on many campuses as a space for undergraduates. But Harvard has more than twice as many grad students as undergrads, and the Zarchis saw an opportunity. Now, their weekly Shabbat dinners routinely draw hundreds of attendees.

“We never saw ourselves as here to compete. We always saw ourselves as kind of a complement, and to tap into this big market,” said Zarchi. Cambridge and neighboring Somerville have become a hub of Jewish life for young people — students and professionals — in the Boston area, and Harvard Chabad has added programming to reach them, too.

Dahan counts himself as a Chabad success story. He lived in Boston in his 20s, as a business school student, and built such a close relationship with the Zarchis that he continues to turn to them for personal and spiritual advice. The early years of their friendship overlapped with a time of transition for Dahan: he met a partner, got married, had kids and began to attain professional success that allowed him to ask big questions about philanthropy.

“I got to learn a lot about what Judaism has to say about these different stages of life and how Judaism answered a lot of the questions I was having anyway,” said Dahan. “What’s the meaning of life? Let’s say I’m successful, then what? How do I engage in meaningful work? How do I find a partner that is going to be the right partner for me for my life? How do I want to raise my kids?”

He grew up in Marin County, Calif., in a Jewish household he described as “West Coast Conservative.” His family did Shabbat dinner every Friday, but not much beyond that, although Dahan now observes Shabbat traditionally. He was often the only Jewish person at his school, and he kept his Judaism to himself. But his father, who grew up in Morocco and sometimes felt compelled to respond to antisemitism with a show of strength, taught him to wear his faith proudly.

“[For him] it was very much like, ‘Don’t mess with us,’” Dahan said. “It was not the dominant, ‘Keep your head down, fit in, don’t make too much noise,’ that unfortunately we still see in this country.” This was part of the reason behind his gift, and behind the creation of the Dahan Fellows program — to identify and support students who are “embracing that out front, out loud, proud Judaism in the leadership that they bring,” he explained.

This might be Dahan’s approach to Jewish identity, but as a philanthropist, he said he usually prefers to stay behind the scenes. He was swayed, however, by a tenet of the Chabad approach to philanthropy: “One mitzvah publicized creates more mitzvot,” he said, quoting the same Hebrew phrase about Jewish commandments that Zarchi used in conversation with eJP.

Ultimately, what convinced him to create the endowment was the idea of planting a flag in Cambridge and saying that Chabad is here to stay.

“There are plenty of people, maybe even some Jews, who don’t want to see guys dressed in black with long beards and hats wandering around campuses,” said Dahan. “This is a way of saying, ‘Get used to it. Embrace it.’”