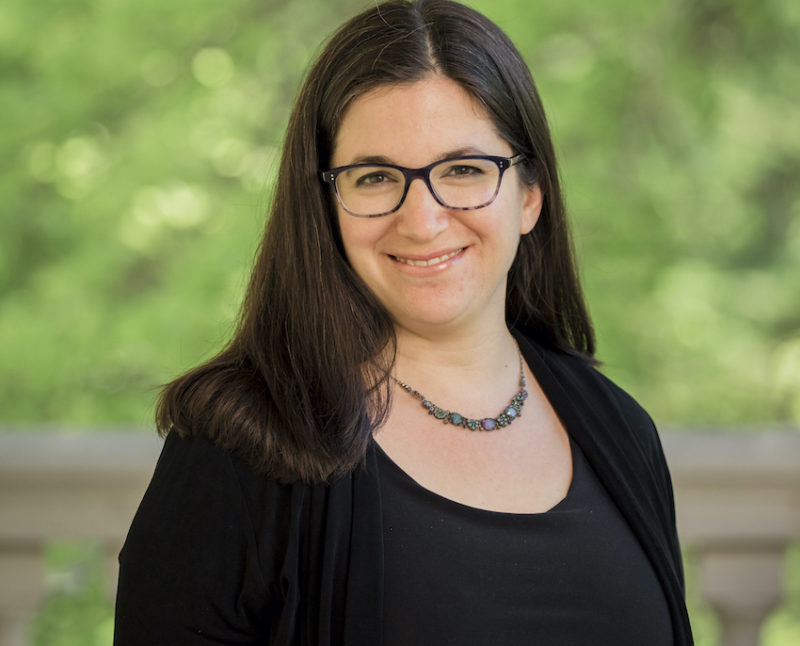 Since Abby Levine took the helm of the Jewish Social Justice Roundtable in 2012, the umbrella group has nearly tripled in size to 70 affiliated organizations working to fight climate change and food security, and advocate for immigrant and reproductive rights, among other causes. Levine took the job envisioning the Roundtable’s members as a coalition working toward policy goals, but came to realize that the Roundtable could serve as a convener that provides training, education and inspiration.

“That was a big strategic clarification that allowed for our growth,” she said. “There’s a part of me that likes working on an issue and I had to let that go, but it’s 100% the right decision.”

The interview has been edited and condensed.

Helen Chernikoff: Did you always know you wanted to be an activist?

Abby Levine: I wanted to be a camp counselor forever. I just really liked the spirit of it. But there is a way in which the conferences and the training we run have elements of camp for grown-ups. We go away to Pearlstone Retreat Center [outside of Baltimore] and program our days in ways that build community, are grounded in values and make the world a better place. It’s so gratifying to get people into bigger-picture thinking as a field and a movement and to have fun together. One of our standards is karaoke. Now, because of the pandemic, even just being in a room together will be fun. Our bar has dropped over the past year. Those things are going to happen again, although I don’t know when yet.

HC: What would you say is one of the Roundtable’s primary accomplishments?

AL: It changed the atmosphere from one of competition to collaboration. That doesn’t mean that all the competition has gone away. But people know that the Roundtable is the place to come for partnerships, for collaborations. None of us can accomplish our visions by ourselves; we have huge ambitions. We need each other.

HC: Do members of the Roundtable find themselves competing for funding?

AL: It plays out in a lot of ways. There can be competition for funding, for press attention, for board members, and it happens everywhere, throughout the Jewish world and the broader nonprofit world. It’s important to talk about it and to acknowledge that this exists.

HC: What are the Roundtable’s main sources of funding?

AL: Most of our funding comes from private foundations as well as dues from the organizations. They pay depending on the size of their budget. We also have a small group of individuals who are major donors, but most of our donors are foundations. There’s a group of about 15 or so, including the Jacob and Hilda Blaustein Foundation, the Nathan Cummings Foundation, the Dorot Foundation, the Walter & Elise Haas Fund, Charles and Lynn Schusterman Family Philanthropies and the UJA-Federation of New York.

HC: In practical terms, how did the Roundtable help its members become less competitive?

AL: We have this mantra of “relationship before task.” Our founding document consists of norms that describe how we work together, not the content of the work. We talk about that document a lot. We ask people to recommit to it every year, and it asks each group to lift up everyone else’s work, not just their own work. It’s about helping them get funding, for example. That spirit is a key reason why we’ve grown to 70 organizations.

HC: Does a Roundtable of 70 organizations ever become cumbersome?

AL: Some people ask why we need 70 Jewish social justice organizations. The answer is that we are a mixed multitude. We know that the Jews left Egypt that way. There are 70 faces of Torah. We need to not shrink from this truth but lean into it, embrace it and find Jewish ways to join across lines of difference and be part of the transformation of systems and ideologies that hurt all people regardless of background. Our Jewish community, which I love, doesn’t always have a track record of sitting with discomfort. We at the Roundtable tried to take that on by implementing our own racial justice effort in 2016. We’ve seen some progress made in terms of our organizations better representing the multiracial reality of the Jewish community.

HC: Did you sign the Not Free to Desist pledge, which asked Jewish organizations to commit to seven actions related to racial equity, such as explicitly endorsing the statement “Black Lives Matter” and investing in leadership development for Jews of Color?

AL: We did not. We are a field-builder. We build the capacities of our organizations. We did facilitate communication between the Not Free to Desist organizers and our organizations, and we support our organizations in this work. We give grants; we created a community that shares best practices. April Baskin, our racial justice advisor, created a framework of 10 guiding principles to help our organizations reflect and act. But we don’t take stances. We don’t try to unify our organizations. We try to align our field in strategic ways. April has been an important teacher for me. A lot of what I’ve learned about DEI [Diversity, Equity and Inclusion] work has been in watching her. I remember one particular moment when we had gotten some bad news, and I saw her shift from this negative space to say, “What’s the opportunity here?” That was so inspiring.

HC: Sometimes the words “social justice” can make people feel defensive. How do you handle that?

AL: People may think the words and the ideas behind them and the work are academic constructs, but they’re not. These issues — like criminal justice and immigrant rights — have a real impact on people’s lives. And one of the core principles is following the lead of people who are impacted, which really requires a large discussion. So when people have that cognitive dissonance it’s important to look at the problems, and at the reality of the people on the ground who are struggling. DEI work can be a challenge, too. Part of the work is for us to help each other, and see that it’s not a threat, to ask people, “What are you worried about? What’s holding you back?” Sometimes people don’t know, so that’s hard. I don’t have any easy answers. But I know that ignoring it is not the answer.