Getting the data on compensation for early childhood educators

A collaborative of organizations will collect data this month on the salaries, benefits and educational credentials of Jewish early childhood educators across the United States 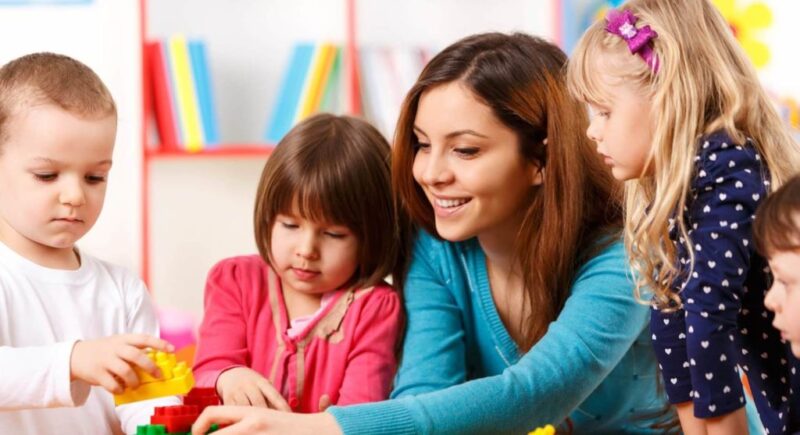 When it comes to Jewish education, early childhood educators — who steward children ages 0-5 — are the first line of experience, caring for students’ well-being and setting the stage for future connection to Jewish life and community. But the pay for those educators is also extremely low, anecdotally and according to several surveys, with many living below the poverty line, and with few receiving benefits.

A staffing and compensation crisis was looming even before the pandemic, Lisa Samick, president of Early Childhood Educators of Reform Judaism (ECE-RJ) and director of early childhood and family engagement at Temple Israel of the City of New York, told eJewishPhilanthropy.

“What happens in Jewish early childhood centers is as impactful, if not more impactful, than what happens in a Jewish day school or high school, on the family itself and on the child,” said Samick. However, “because as a field, we are generally poorly paid, under-benefited and under-resourced, the perception of early childhood education is not the same as day school education, elementary school education or university learning: the perception is that this is a lesser education,” Samick said. While the Jewish community has long invested in other Jewish educational spaces, like camping, day school programming and PJ Library, she added, it has done so to a much lesser extent for early childhood centers.

“I think what has come out of the pandemic is just really a spotlight into how essential early childhood education actually is,” Samick said. “Society can’t function, people can’t go to work if there’s no childcare. And the basic socialization skills that children need to master in order to succeed in elementary school, middle school and high school are learned in early childhood settings.”

Working together with national network and community leaders, the ECE-RJ, the Jewish United Fund of Chicago (JUF), Sheva Center at JCC Association and more than a handful of federations have partnered on ECE-RJ Early Childhood Educators Compensation Study, which will collect data this month on the salaries, benefits and educational credentials of Jewish early childhood educators across the United States. The team expects to report on the outcomes in late fall, and hopes that findings from the study will inform recommendations for policy and practices in ECE educator compensation.

The effort — and most of the funding — is being provided by the JUF and ECE-RJ; additional financial support comes from JCCA, American Jewish University, The Jewish Federation of Greater Los Angeles, Combined Jewish Philanthropies of Greater Boston, Jewish Education Center of Cleveland, Jewish Federation of Greater Metrowest NJ and Denver’s Efshar Project. These communities have committed to being very involved in recruitment, funding the research, and receiving a specific report for their city. Federations in seven additional cities — Houston, Miami, Washington, Dallas, Pittsburgh, St. Louis and Atlanta — committed to sharing contact lists of early childhood centers and sending the information about the survey to their centers’ leadership, but didn’t commit to extra outreach or the funding support tier that would entitle them to individual reports.

The Greenberg Team’s Ariela Greenberg, who is providing research and evaluation

consulting services to the study team, said that the cross-sectional study of compensation package data (fall 2021-summer 2022) and how they relate to credentials will “compare and contrast communities.” The study will also look at national data controlling for certain factors, such as labor markets or Jewish community size, to examine the salary, benefits and early childhood staffing landscape, she added, because “state funding mechanisms or credentialing requirements vary and that might impact salary ranges,” she said, adding “as a national study, we can measure data as consistently as possible while also in alignment with the various state laws and policies in place,” Greenberg said. “To help benchmark the compensation, we will also compare and contrast data with similar labor markets such as secular early childhood and K-12 educators.”

While all schools’ staff were tasked beyond their capacity during the pandemic, early childhood educators, arguably, had it the worst. They went back to work first, to enable parents with young children to resume their professional responsibilities, and many risked their health — and the health of their own families at home — to be in schools with young, unvaccinated children who were resistant to wearing masks. And with salaries extremely low, there was weak incentive or reward for their toil.

A brief based on data from a 2021 study by George Washington University’s Collaborative for Applied Studies in Jewish Education (CASJE) calculated the mean salary of full-time early childhood educators as $40,000. (The report also cites a Leading Edge survey indicating that for early childhood educators, “the most frequent salary range was less than $20,000, with a mean of approximately $32,000.) Early childhood education also lagged in salary and benefits for educators: 65% receive paid vacation, 52% receive some medical insurance or health care and 10% receive no benefits at all,” the CASJE study found.

In Chicago, JUF knew salaries were bad for early childhood educators, but set a goal for future compensation: pay parity with the local K-12 school system. But the problem, said Anna Hartman, JUF’s director of early childhood excellence, was that they “didn’t know where we currently stood.”

“How far are we from our goal? We expect that differential to be astounding, but we need it in order to advance,” Hartman told eJP. JUF knew colleagues at ECE-RJ were interested in expanding a related survey, so they partnered on the effort. “The experience of working across organizations during COVID led us to believe that important projects, when shared among partners, can provide the energy, diversity of perspectives and resources to heighten the quality of our work,” Hartman said.

Samick also said she felt inspired by the organizations working toward a common goal. “It’s all these various people that have their own agendas and their own programs that they’re running. But we recognize, universally, that there’s a crisis here and that there needs to be more attention paid to it. In the silver linings of COVID is the fact that these organizations, that never would have come together before to work together on a common goal, are coming together.”

In Los Angeles, the federation is serving two main partnering roles, said Shira Rosenblatt, its associate chief program officer of impact and learning: financial  and strategic support. Rosenblatt serves on the advisory team that helped to choose the researcher and support the design, implementation and reporting of the study. Her federation education colleagues Reuben Posner and Carly Rosenstein have been able to provide context and feedback on instruments and help to encourage directors in the ECE network to participate, Rosenblatt told eJP.

“We have invested so much over the last several years in ECE — it has been a real priority for us,” Rosenblatt said, mentioning programs for families with young children, a new program called LA JBabies and a leadership institute cohort of Jewish early childhood educators, among other initiatives. “We are aware of the national and local stressors within the early childhood landscape and are committed to creating a stronger, resilient, creative and relevant Jewish early childhood landscape that serves to welcome and engage families in Jewish life. We believe in the transformational nature of Jewish education, especially for families with young children. These data will help highlight the needs for our community.”

So what happens when the data report comes back? The answer will be “multifaceted and require layers of interventions over many years,” Hartman said.

“This study, from our perspective, presupposes that this problem is fixable and that we need real data to help us galvanize the coalition to make change happen. It is going to take all of us and it is worthy of our time and efforts. This challenge is not ours alone — while this data will be specific to the Jewish community, much of the needed advocacy and solutions must surely be addressed through public policy and wide-reaching organizing,” Hartman said.

“These results will help inform strategies for working with ECCs moving forward — locally and nationally,” Rosenblatt said. “And whatever changes may be on the horizon, we are prepared to help facilitate those changes, in partnership with the BJE, local ECCs and national partners, as appropriate. We have nurtured our relationships with the ECCs in our community and partnered with them innovatively over the last several years — we look forward to continuing to do that.”

Staffing is still an issue, Samick added, because an early childhood educator’s career can be a tough sell “if it doesn’t come with health insurance or retirement package.”

“This is an essential educational stage: that what you learn in preschool propels success moving forward. And it needs to be compensated in a comparable way to show that,” Samick said.” She added, “I think that because we are sort of at this cross section where early childhood is being seen nationally in a different way — based on the fact that society shut down when there was no place to put the kids and the parents could not go to work — that maybe we’re at a point, culturally, that we can look at this differently.”