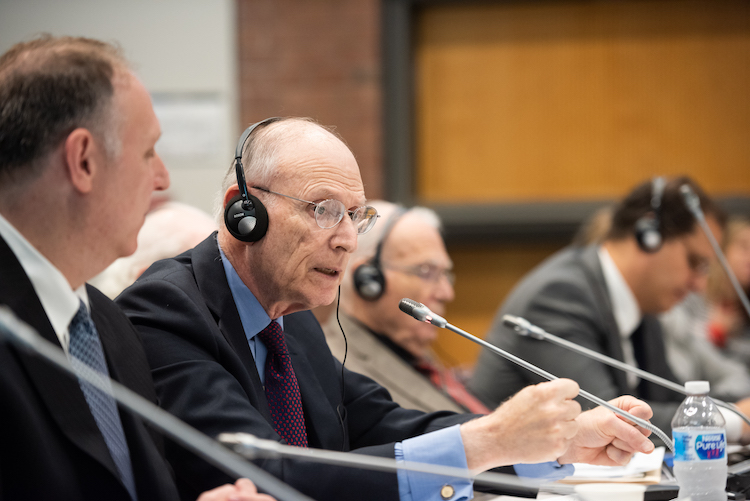 Some 6,500 additional Jewish Holocaust survivors are now eligible to receive pensions from the German government due to advocacy from the Conference on Jewish Material Claims Against Germany (Claims Conference). The Claims Conference had been negotiating on behalf of three groups for the past five years in its annual sessions with the government of Germany, Special Negotiator Stuart Eizenstat, who is also the former U.S. ambassador to the European Union, told eJewishPhilanthropy.

“I started as special negotiator in 2009,” Eizenstat, the head of the international practice at the law firm Covington & Burling, said. “Since then, we have worked to add more and more categories of people as Holocaust victims, and to increase the amounts of the payments.”

The groups newly receiving pensions are survivors of the siege of Leningrad, which lasted from September 1941 to January 1944; Jews who hid in the south of France but were able to venture out into public during the day; and Romanian Jews who weren’t forced into ghettos but had the trauma of worrying they might be turned into the government, a Nazi ally. In 2009, the siege survivors were granted a one-time payment.

Founded in 1951 by representatives of 23 Jewish organizations, the Claims Conference has secured about $90 billion in compensation and restitution to Jewish victims of the Nazis. In 2009, the conference discovered signs of fraud, and in 2010, the FBI announced an indictment against 11 employees and other individuals. Semen Domnitser, a former director of the conference, was the highest-ranking employee to participate in the fraud, estimated at $57 million, and was sentenced to eight years in prison.

The coronavirus pandemic played a coincidental role in securing pensions for those in the added categories, Eizenstat said. The Claims Conference arranged for the German negotiators to do a Zoom session with a survivor in Florida, who had survived the siege of Leningrad as a child, in order to mitigate the alienating effects of online communication.

About 50,000 Holocaust survivors already receive monthly pensions averaging €580, or $673. The amount allocated for the new pensions is lower, at €375, or $435, because these new recipients of reparations suffered relatively less than others did.

“These were traumatic conditions, but not the same conditions as those who were in concentration camps, in closed ghettos or in hiding,” Eizenstat said.

That discrepancy in the amount of suffering is also the reason Germany resisted providing pensions for these groups, Eizenstat said.

The German negotiating team argued that Jews were not the only survivors of the Leningrad siege, and the Claims Conference negotiators countered with historical research that showed that the Germans dropped flyers on the city stating they would stop the siege if the citizens would turn over their Jews. Eventually, the Germans agreed that the trauma of living with that fear merited reparations in the form of a pension.

The Claims Conference maintains that more Jews lived in what Eizenstat called “open ghettos” — where they had limited mobility and lived with the threat of deportation and death. The conference will continue to work to secure reparations for those people, some of whom lived in North Africa.

The average monthly pension when Eizenstat began his work with the Claims Conference was about €220, or $255 , compared with the current figure of $673. In 2009, the Germans had allocated €34 million, or $39 million, for care for homebound Holocaust survivors; now the budget is €600 million, or $700 million, because the Claims Conference has successfully represented to the German government an increase in need as the survivors have aged, even as tens of thousands have died.

“Every survivor deserves to be recognized,” Schneider said.