Entering the White House, I expected to feel unsettled. Yet as I crossed the threshold, I thought about the all-important distinction between a government seeking a religious endorsement, or privileging one religion, and a government that extends respect and gratitude to all religious groups that make up the fabric of our society and especially its generous and humane aspects.

How fortunate American Jews have been in the United States. This country has offered Jews a sense of at-homeness unprecedented in Jewish history. Having been granted citizenship as a matter of course along with other Americans, our ancestors had the confidence to plant new roots in this country and were able to flourish as both Americans and as Jews. By establishing a secular state that was friendly to religion, the founders made it possible for Jews to contribute to society without hiding or renouncing their Jewishness.

So when an invitation to the White House Hanukkah party popped up in my inbox, I was filled with emotion. Honored to be invited, I hastily replied that I would attend. But I confess that something continued to gnaw at me as the day drew near, for I grew up in an era when separation of church and state was understood to be a necessary safeguard of the liberty that Jews have enjoyed. My rabbi father would rail against nativity scenes in the public square, and the addition of a hanukkiah, or menorah, far from assuaging his concerns, only exacerbated them. 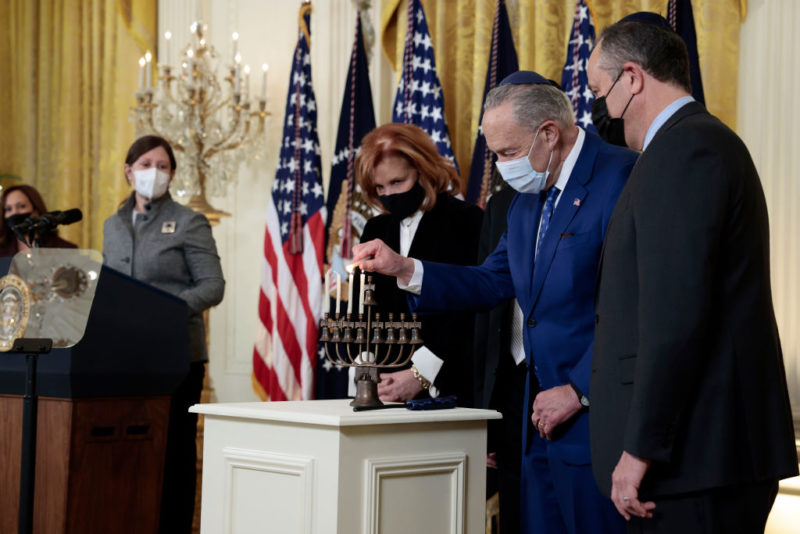 For my father and so many Jews in mid-century America, Madison’s view that “religion and government will both exist in greater purity the less they are mixed together” resonated.

But what did it feel like to participate in a Hanukkah candle-lighting ceremony and reception in the People’s House in 2021, after decades in which the lines separating church and state have been blurred considerably, a development many Americans — Jews included — heartily endorse?

Entering the White House, I expected to feel unsettled. Yet as I crossed the threshold, I thought about the all-important distinction between a government seeking a religious endorsement, or privileging one religion, and a government that extends respect and gratitude to all religious groups that make up the fabric of our society and especially its generous and humane aspects. This event surely reflected the latter. Passing through the White House corridors, we were greeted by live music and staff who offered a hearty “Welcome to the White House.” I realized that was precisely how I felt: welcome. And as I entered the room where we would light the candles — despite the presence of six Christmas trees and four wreaths amidst a portrait of George Washington, I experienced a mixture of joy, pride and immense gratitude.

Perhaps the relationship between church and state has always been more complicated than meets the eye.

As Will Herberg, social philosopher and sociologist of religion best known for his  book Protestant, Catholic, Jew reminded us almost 70 years ago (just as my father’s rabbinate was beginning): “neither in the minds of the Founding Fathers nor in the thinking of the American people … did the ‘separation of church and state’ imply unconcern with, much less hostility to, religion on the part of the government.”

When I stood among other Jews celebrating Hanukkah with our Catholic president in what is still a culturally Protestant country, I saw the truth in Herberg’s assertion. I also identified deeply with our early American Jewish forebears, for even in 1788, just a few weeks after the Constitution was ratified, Jews participated in public events to celebrate the moment. The largest of these celebrations took place on July 4 in Philadelphia — then the capitol of the country. Blacksmiths walked behind a large bellows that symbolized the passion to keep alive the flame of liberty. Ministers marched arm in arm. And though there were no rabbis in the country yet, a hazzan filled this role.

Naphtali Phillips, a child at the time, later described the event in a letter, making special mention of the food served to the marchers at the end of the parade: “There was a number of long tables loaded with all kinds of provisions, with a separate table for the Jews who [for religious reasons] could not partake of the meat from the other tables; but they had a full supply of soused [pickled] salmon, bread and crackers, almonds, raisins etc. This table was under the charge of an old cobbler named Isaac Moses.”

The symbolism here is astounding. Less than a month after the ratification of the Constitution and three years before the adoption of the Bill of Rights, which guaranteed freedom of religion, Jews already felt and exercised that right. They participated fully as American Jews — their hazzan arm in arm with Christian ministers and the presence of supervised kosher food ensuring that they too could enjoy the celebration. They simultaneously stood both as part of and distinct from the heart of American life. Phillips detailed the sumptuousness of the “kiddush” not the strangeness of it.

Then as now, the strength of our country derives from the diversity of religious voices — majority as well as minority ones. This diversity for Jews is now embodied in the person of Doug Emhoff, for this candle lighting marked the first time Hanukkah was celebrated by a Jewish member of the Second Family, the Second Gentleman. The Liberty Bell menorah that was kindled reinforced this sentiment, for it was designed by Manfred Anson (1922-2012), a Holocaust survivor, in honor of Philadelphia’s Liberty Bell. In Herberg’s words: “America is predominantly a land of minorities; that is its uniqueness, its strength, but to a degree also its weakness. Some way must be found in which these minorities within the national community may each freely pursue its own particular concerns without impairing the over-all unity of American life.”

Hearing President Biden, Vice President Harris, and their spouses share powerful Hanukkah-inspired messages of hope, steadfastness and survival; reciting blessings over the Hanukkah candles and singing “Maoz Tzur,” listening to the stirring words of JTS alumna Rabbi Lauren Holtzblatt, I felt the privilege of living fully as both an American and a Jew, of embracing both my Jewish distinctiveness and my unity with all Americans.

Shuly Rubin Schwartz is the chancellor of The Jewish Theological Seminary and Irving Lehrman Research Professor of American Jewish History.