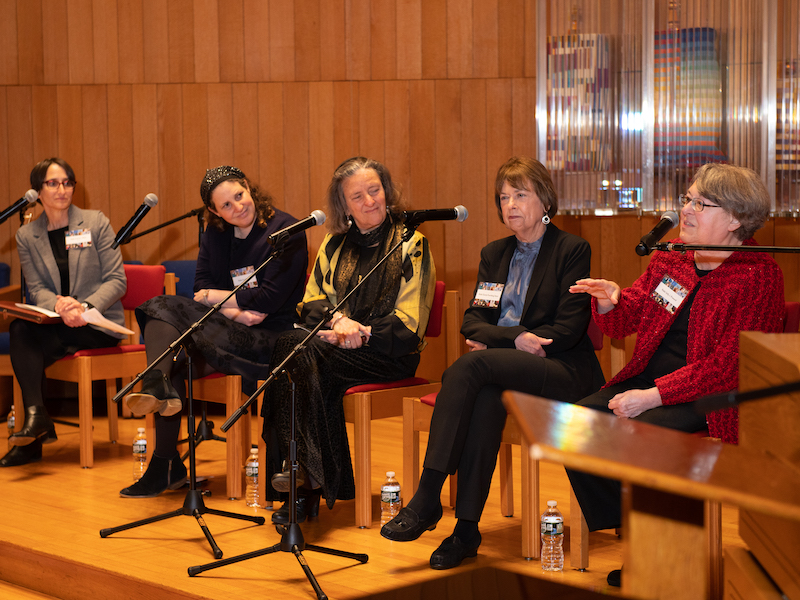 An event on Thursday marking 50 years of women in the American rabbinate was at once a celebration of pioneering women rabbis and a testament to the barriers they still face.

The event, held at Hebrew Union College-Jewish Institute of Religion (HUC) in New York City, paid tribute to Rabbi Sally Priesand, who became the first woman ordained by an American seminary — HUC’s branch in Cincinnati — nearly 50 years ago, on June 3, 1972.

It also showcased “Holy Sparks,” a collection of 24 artworks representing 24 pathbreaking women rabbis. Some of the works are traditional portraits — Priesand’s, by the artist Joan Roth, is a photograph of her with a dog. Rabbi Sharon Brous, of Ikar, a Los Angeles congregation, is depicted in a series of five black-and-white photos with various accoutrements, and one color shot, all by Penny Wolin.

Others are more conceptual. The work representing Rabbi Angela Buchdahl of New York City’s Central Synagogue, created by Laurie Gross and including photo, dyed linen and embroidery, is a column made up of seven copies of the Hebrew letter shin, which can represent God, in front of a photograph of the blue tapestry on her synagogue’s Torah ark. That image is surrounded by Hebrew and Korean words, representing Buchdahl’s heritages.

The portraits are based on interviews of the rabbis by The Braid, a Jewish theatrical and storytelling group based in L.A. They will be shown at HUC’s Cincinnati campus beginning in May.

“The world of portraiture is being expanded and redefined every single day,” Rabbi Amy Perlin, whose portrait is also included in the exhibit, said at the event. “A true portrait captures the essence of the subject revealed by the heart, the eye and the hands of the artist in their respective medium.”

The centerpiece of the event was a panel of the four women who were first ordained by each of the four major Jewish denominations: Priesand by the Reform HUC in 1972; Rabbi Sandy Eisenberg Sasso, ordained in 1974 by the Reconstructionist Rabbinical College; Rabbi Amy Eilberg, ordained in 1983 by the Conservative Jewish Theological Seminary; and Rabba Sara Hurwitz, ordained in 2009 by Rabbi Avi Weiss of Yeshivat Chovevei Torah, a liberal Orthodox seminary in New York City.

It was not the first time the four rabbis had shared a stage, a fact made clear when they joked about having to repeat the same stories about how they each decided to become a rabbi. All of them talked about support structures that helped them achieve ordination against the odds and build a career as a rabbi — whether a teacher, relative or congregants. Priesand said that her parents approved of her career path even though she was the first American woman to choose it. (Regina Jonas, a German Jew, was ordained in 1935 and killed in the Holocaust in 1944.)

“They gave me what I consider to be one of the greatest gifts that a parent can give a child, and that is the courage to dare and to dream,” Priesand said. “Because of that, it didn’t seem to bother me that no woman had ever been ordained a rabbi in America, and I didn’t pay that much attention to the doubts I heard expressed in the Jewish community.”

Some of the rabbis onstage said that the status as the first woman rabbi in their denomination made them feel like a representative of all women — and a target for people who disapproved of women in the rabbinate. Priesand said that she chose not to marry or have children in order to focus on her rabbinic career. Sasso called the experience “so lonely.” She added, “To see how many women rabbis there are, to have a community to share ideas with and to ask questions and to bounce off problems with, that’s extraordinary. I had nobody to talk to.”

“It becomes familiar that people project things onto us,” Eilberg said. “I got a fair amount of ‘You’re destroying Judaism,’ and if I ever made the slightest mistake reading Torah at a Rabbinical Assembly convention… If anything ever happened, it felt like the whole room shouted out the correction.”

The event also obliquely touched on the injustice more recent women rabbinical students have faced. In his opening remarks, HUC President Andrew Rehfeld alluded to “the challenges and the risks and harms [women rabbis] have faced, as we embark ourselves on a process of teshuva, to find healing and to seek to ensure that HUC-JIR, our own institution, offers a sacred and respectful environment of spiritual and educational exploration imbued with Judaism’s highest values.” It was likely a reference to an independent investigation commissioned by the school, and published in November, that contained sexual misconduct allegations against two of Rehfeld’s predecessors.

The panel also included reflections on the positive points of becoming women rabbis. Eilberg added that being the first Conservative woman rabbi has also given her opportunities, such that she feels as if she’s had “a graced journey through the rabbinate.”

And Hurwitz said that despite the controversy in the Orthodox world that accompanied her ordination, she is grateful to her congregants for standing by her.

“The community… had to withstand a lot of controversy, and family members asking them why they went to this crazy synagogue,” she said, referring to the Hebrew Institute of Riverdale in New York City. “But I think they were so used to seeing women, and myself, standing at the pulpit and delivering sermons and being part of the community that being the first wasn’t all that interesting.”