An artist and her golem respond to California’s wildfires

After my training, I could no longer see Smokey the Bear as a cuddly, anthropomorphic talisman warning against fire

Last September, twenty miles northeast from my home in Pasadena, California, the Bobcat Fire scorched over 100,000 acres of the Angeles National Forest—a mere fraction of the four million acres burned in California in 2020. Days before the Jewish New Year, I awoke to the smell of trees burning, my asthma triggered, and my lungs incapacitated by the smoke. It was the middle of the pandemic. With few safe places to go, I fled 100 miles north to my friend’s home in Santa Barbara county, where we planned to celebrate Rosh Hashanah together. As I drove out of Los Angeles, I grieved the forests that had given me refuge in the early months of the pandemic. Morbidly, I imagined the trees now burnt to ashes.

A year before the fire, I had completed wildland firefighter training through the U.S. Forest Service and National Wildfire Coordinating Group as part of an artist residency organized by UC Berkeley’s Sagehen Creek Field Station in Tahoe National Forest. Sagehen has become well known for their implementation of prescribed burns as a method to correct for fire suppression and the resulting overgrowth. The station managers invited me to participate in a training program specifically designed for artists and filmmakers after they attended a presentation I gave about my iterative performance art project, My Golem. Sagehen’s managers recognized the role that culture-makers could play in unseating the illusory vision of untouchable wilderness that one hundred years of federal policy, whereby fires were extinguished as quickly as possible, had entrenched in the public consciousness. They saw that my project engaged audiences and addressed difficult subjects in an engrossing, stylized manner. 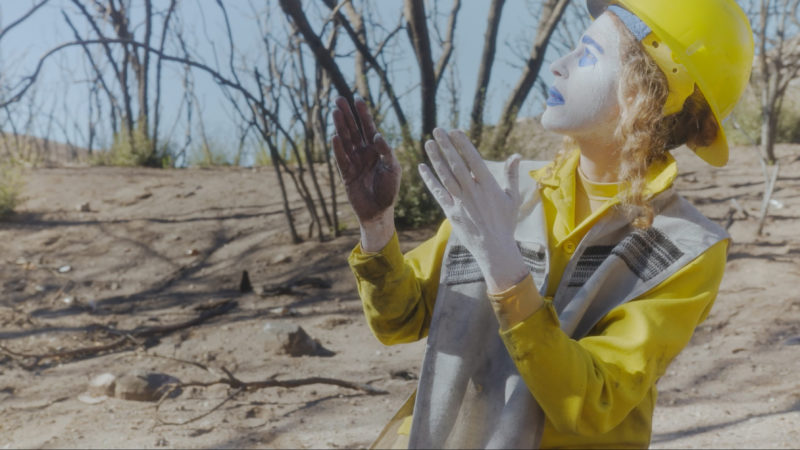 My Golem began in 2017 and centers on my portrayal and embodiment of a diasporic humanoid drawn from Jewish mysticism and Yiddish folklore. The legend of the golem originates as far back as the Middle Ages, when Kabbalists imagined the creation of a clay humanoid as a meditative technique for becoming closer to God. By the nineteenth century, popular Yiddish folktales characterized the golem as a helper, companion, or rescuer of an imperiled Jewish community. Today, the golem is often represented in popular culture as a dumb, secular monster. In contrast, I revitalize the clay figure as a charismatic and ethically-minded clown who guides human beings towards a more reparative relationship with others and the more-than-human world. Over the past four years, My Golem has evolved from Instagram videos to performances at protests to creative collaborations—taking on a life of her own.

Sagehen provided me with a powerful new lens through which to comprehend the catastrophic wildfires raging across the West. The program linked the ancestral practices of Indigeous cultural fire to a conception of fire as a regenerative tool for cultivating healthy forests and preventing megafires—the new, extreme fires that incinerate centuries-old trees and deep-rooted seed banks normally resistant to seasonal fire. After my training, I could no longer see Smokey the Bear as a cuddly, anthropomorphic talisman warning against fire; I now understand the character as an embodiment of colonialist policies that tragically reversed centuries of ecological wisdom practiced by the Indigenous forebearers of the land.

With this in mind, I began to research how Jewish traditions, which uphold fire as a force for hope and a foundational element in spiritual ritual, could be framed to support progressive wildfire policy and the Indigenous cultural practice of controlled burns. As a Jewish Californian directly impacted by the particular climate catastrophe of the region, I felt a moral obligation to confront these issues.

Far from the apocalyptic, smoke-filled skies of Los Angeles, on the first morning of Rosh Hashanah, we streamed services through The Kitchen, an egalitarian and experimental congregation based in San Francisco. After six months in quarantine, praying and singing together felt like a salve. When it was time for the sermon, I let the prophetic words of Rabbi Noa Kushner wash over me. Rabbi Noa has an adept ability to contextualize current challenges and offer solutions through ancient Jewish wisdom. For the Hebrew calendar year of 5781, she presented the idea that in the Torah, rain is political. Our millennial-old system held humans responsible; if rain did not come, it was assumed that something was wrong in the community. Instances of theft, corruption, and violence would be investigated and if the drought continued, the rabbis advised that business must also stop. According to the Talmudic sages, unnecessary building projects should be put on hold until the natural order of the world was reset.

I headed back to Los Angeles, uncertain about the conditions I was returning to; the Bobcat Fire was only fifteen percent contained, and local agencies were advising residents to avoid outdoor activity, keep windows closed, and run air purifiers. Climate catastrophe had reached my front door and I wondered how I could utilize this period of introspection between Rosh Hashanah and Yom Kippur to atone. If centuries ago, the Talmudic rabbis had instructed the community to investigate acts of wrongdoing in response to drought, were we not also obligated to probe our reckless behavior in response to the raging wildfires? More than “natural” disasters or “acts of God,” the megafires were instigated by compounding human actions— the burning of fossil fuels, suppression of fire, denuding of forests, and disregard for Indigenous ecological knowledge.

Together with my friend Rabbi Zach Fredman, I created a prayer intended to be read and delivered in nature as a gesture of respect, restoration, and genesis. “A Prayer for Burnt Forests” frames a view of nature that emphasizes cultural issues and ecological catastrophe while acknowledging human beings’ implicit responsibility for atonement and repair. Embedded in the prayer are earth-based Jewish concepts like b’tzelem elohim, the holiness of the divine image in everything. In the text, we acknowledge that we are guests on the ancestral lands of Indigenous communities who stewarded the forests for millenia. Bookending the prayer is a reference to the Talmudic sage, “Honi the Circle Maker,” who drew a circle around his feet and refused to move until it rained. As an extension of this project, I made the short film Prayer for Burnt Forest, which features My Golem traversing the recently-charred landscape of Tongva land in Southern California, performing the prayer as a ritual dance. Transformed into a wildland firefighter, My Golem satirically replaced the outdated icon of Smokey the Bear.

During this season of the High Holidays, as fires rage across the West, I invite you to recite the prayer. Healing begins when we first acknowledge our wrongdoings and then reorient our actions toward repair.