Adidas and the ADL embark on four-year, seven-figure partnership in wake of Kanye controversy

The partnership will entail a new anti-bigotry curriculum for student athletes, and will enable the ADL to more widely disseminate its educational efforts. 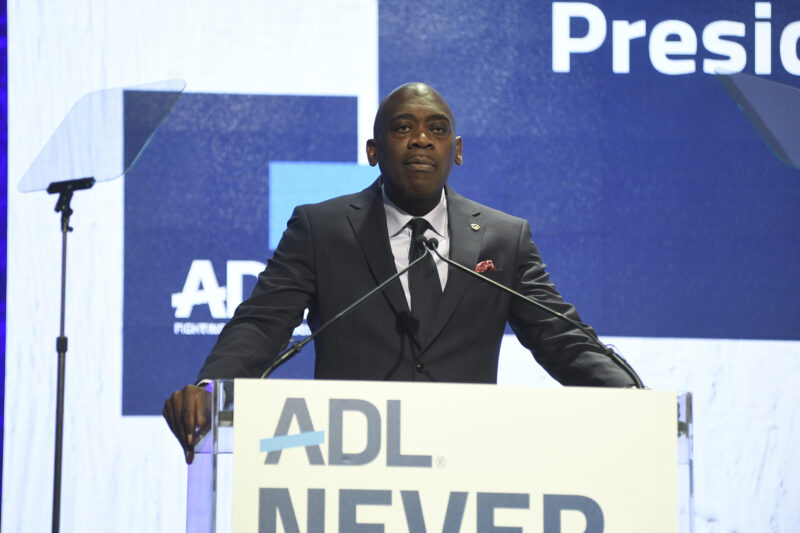 Just weeks after Anti-Defamation League CEO Jonathan Greenblatt accused Adidas of an “appalling” lack of action against Kanye West’s antisemitism, the sportswear giant is donating more than $1 million to the Jewish organization, and embarking on a partnership to educate athletes against bigotry, eJewishPhilanthropy has learned.

Greenblatt hinted at the partnership in a speech this morning at the group’s daylong “Never is Now” conference in New York City. He detailed how the ADL had pushed Adidas in private, and then in public, to end its lucrative partnership with West’s fashion label, Yeezy, after West’s string of antisemitic remarks. After Adidas ended its Yeezy collaboration last month, following a precipitous drop in its stock price, Greenblatt praised the company.

“While I wish they did it sooner, Adidas – to their credit – made it abundantly clear that they would not do business with bigots,” Greenblatt said. “And today I am so pleased that they are here at Never Is Now to announce an incredible commitment that demonstrates that their dedication to fighting antisemitism will last long beyond this moment.”

An ADL spokesperson told eJP that Adidas is giving the ADL a four-year, seven-figure donation, and that the two will embark on “a formal partnership to combat antisemitism and hate in sports.” The partnership will entail a new anti-bigotry curriculum for student athletes, and will enable the ADL to more widely disseminate its educational efforts. The partnership also aims to engage professional athletes in fighting hate.

Adidas’ North America president, Rupert Campbell, said in a speech at the morning plenary that the company opposes antisemitism, but that “we at Adidas fully understand that this may not be apparent to many of you given the recent events.”

“There is no place for antisemitism, racism and hatred in sport, within Adidas or within society,” Campbell said. “We acknowledge that we don’t always get things right. We are not perfect. But in this case, we know without a doubt we made the right decision. The racist and antisemitic hate speech by our former partner violated our values.”

This is the second time in recent weeks that the ADL has been offered donations totaling seven figures after calling out a public figure’s antisemitism. After Brooklyn Nets guard Kyrie Irving promoted an antisemitic film on Twitter, he and his team collectively pledged $1 million to the ADL. But soon after, Irving declined to disavow antisemitism and was suspended by the Nets — prompting the ADL to reject his $500,000 donation.