A place at the table –
A report from TischPDX: Unaffiliated Jewish Leadership Incubator

The What and the Why:

In May of 2018, Rabbi Ariel Stone, Kalyn Culler Cohen and I met to discuss a local phenomenon in our hometown of Portland, Ore.: the abundance of young Jewish organizers, activists and individuals creating Jewish programming and hubs of community outside of our Jewish institutions. The problem was that while these were thoughtful efforts and well-tuned to the organizers’ peer groups, they would spark and then quickly fade. 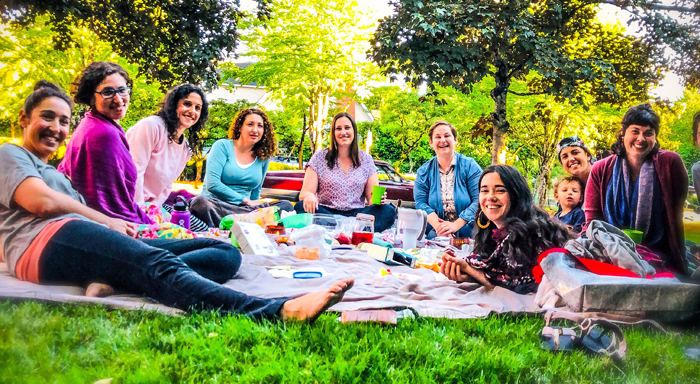 Many of these Jewish event planners, hosts and organizers, including myself, were younger — 20s and 30s, mainly queer-identified, and a significant number raised outside of organized Jewish community. What we had in common was that we were actively seeking places where we could be Jewish in ways that felt authentic to our experiences. For many of us, traditional Jewish environments such as synagogues and Jewish Community Centers did not offer spaces where we felt invited to show ourselves fully — even in programs and organizations that were targeted to younger adults. When we tried to enter these spaces, we had the sense of feeling unseen as young Jews, queer and trans Jews, multiracial Jews — or we would struggle with feeling like we did not know enough, having grown up in interfaith families or raised outside of Jewish homes or communities. We sought places where we could bring our whole selves, and the solution seemed to be that we needed to build those spaces for ourselves.

In 2018, TischPDX: Unaffiliated Jewish Leadership Incubator was launched with support from local private donors, to boost as well as learn from the informal organizing happening in our community. Our theory of change is that when we center the ideas and work of those organizing their peers in these liminal Jewish spaces; pay attention to their vision and insight; and support the shoots of this new growth; we are helping to build what Rabbi Yitz Greenberg calls “The Third Era” of Judaism. Essentially, instead of trying to create programming that attracts young and under-engaged Jews, we approach local organizers and offer the support they identify as necessary to stabilize their efforts and deepen their leadership skills. We understand that by supporting these innovators at their roots, we can help our amitim (fellows) move from seeing themselves as marginalized in the Jewish community to being a central force, guiding our community into the Jewish future.

We have sought to nurture these young Jewish organizers in two ways: by responding to the fact that they have the creativity to organize what they cannot find, and to the equally significant fact that they choose to do so as Jews. To the first need, our primary answer at TischPDX has been a 10-16 month local cohort program. Over that time, we provide our fellows with a mix of adult Jewish education, social justice training and relationship building activities. To the second, we engage them in accessible and exciting Torah study, showing them the strong and supportive truth of the Jewish roots they feel within themselves. The cohort experience also included a stipend, ongoing mentorship and the opportunity to connect with other local organizers, with the goal of building a mutual support network during and after the fellowship year.

We have now graduated two cohorts and, through initial exit surveys, our fellows overwhelmingly report that their experience with the TischPDX cohort left them:

In distilling these successes, we wanted to share some initial findings from this pilot project:

Six Things You Can Do To Engage Marginalized Jews

Ask Us: Instead of creating programming for us, talk with us. This means seeking out those who are missing from your programs and events. Ask us about what informal Jewish activities draw our participation? Seek out the leadership of these efforts. Are there opportunities for collaboration or mutual learning? Are additional supports needed?

Share resources: Many Jews who experience marginalization because of age, class, race, gender identity, sexual orientation or ability also lack resources. A little resource can go a long way to recognizing our work and contributions: specifically, financial support and mentorship, without strings attached.

Knowledge=Power: For many of us who did not receive a Jewish education, attend a Jewish summer camp or attend religious services growing up, alienation comes simply from a lack of knowledge. This can lead to a deep sense of insecurity and alienation when we are in Jewish settings.  Offering engaging, tailored and accessible adult educational opportunities for Jews in marginalized groups is key. We need spaces to learn in that feel safe to us, (eg. explicitly queer and trans) spaces are much easier places for those of us in that demographic to learn in.

We need role models: Look around your organization, school, community. Who is in charge? Who are your leaders, managers, instructors? Who has the decision-making power? If these people are mainly Ashkenazi, heterosexual, cisgender, middle class and literate in Jewish cultural and/or congregational life, than you are missing an opportunity to engage a broad swath of us who do not fit into many of those norms. If we see ourselves in leadership in your organization, it strongly signals that we are important.

Don’t attempt to limit the conversation: Young Jewish adults in the United States have shown through our activism that the ethics we associate with our Jewish identity will not be compartmentalized. Radical openness and honesty about the Jewish world, including Israel, must be welcome.

Social Justice, front and center: For many of us raised outside of Jewish community, the Jewish value around justice is the most compelling “welcome” for us. How are you signaling that you are aware of institutional racism, sexism, classism, heterosexism, trans and queer oppression, ableism and age oppression? And, importantly, share the steps you are taking to address these issues in your organization. We will come to Jewish spaces where social justice is at the forefront.