It’s hard to believe that one year has now passed since one of the greatest leaders of our generation, Rabbi Lord Jonathan Sacks, left us. While his ideas on a vast array of issues inspired millions around the world, Rabbi Sacks devoted a great deal of energy to the subject of leadership. However, Rabbi Sacks didn’t just write and teach about leadership, he lived these ideas. On the anniversary of his passing, here are eight principles every leader should embody, based upon Rabbi Sacks’ ‘Seven Lessons in Leadership,” with one added to further advance his teachings. 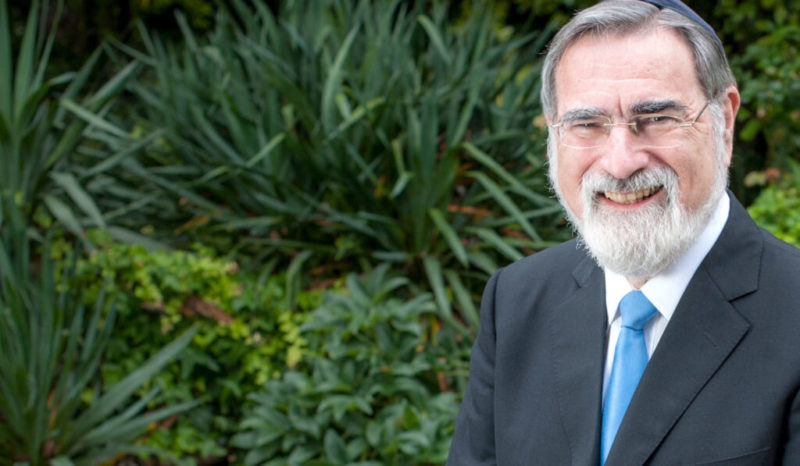 The achievements of Moses were vast and transformational and he received many titles throughout the ages, from the greatest prophet to the teacher par excellence. Yet Rabbi Sacks highlights only one label as his ‘highest accolade’, namely: ‘a servant of the Lord.’ Here Rabbi Sacks reveals the value he sees as most important, ‘a leader does not stand above the people. He serves the people and serves God.’

I had the honor of accompanying Rabbi Sacks when he visited Australia, and I was surprised when in multiple synagogues he sat among us rather than in the special area reserved for the rabbi. Like Moses, his humility was real. He truly saw himself as a mere messenger of a greater message. He quoted C.S. Lewis, who defined humility not as thinking less of yourself but as thinking of yourself less. Rabbi Sacks was so occupied with thinking about others that he thought of himself less. And through this he was a true servant of the Lord and a servant of the people.

Weaving this message throughout his teachings, and allowing it to animate the experience of learning Torah and the journey of prayer through his Koren commentaries, Rabbi Sacks seemed obsessed with taking responsibility, ‘when we see something wrong, we can complain or we can act. Complaining does not change the world. Acting does.’

His theology was one of practice and he did not shy away from dealing with issues of the day, openly defending Israel’s right to defend herself and calling out antisemitism for what it is, fighting those that hated any group, broadening his defense of the defenseless, and indeed calling on all of humanity to make space for one another. He publicly debated some of his greatest philosophical detractors like Richard Dawkins and took on those that presented a real danger like prime ministerial candidate, Jeremy Corbyn.

In short, Rabbis Sacks’ responsibility lay in his ability to respond – something he did with distinction.

Influencers usually have a platform such as heading a large institution, holding a significant office, leading a company or representing an organization. The greater the platform, the louder the voice. Yet, in the last years of Rabbi Sacks’ life – by far his most influential – he had none of that. I know of no Jewish leader today that achieved close to what he did regarding broad authority. Part of what enlivened all he did was his tremendous vision, his capacity to invite others to share that vision and of course, to deliver, ‘leaders are led by their vision of the future, and it is this that inspires others.’

From our birth as a nation to our rebirth in our nation-state, our historic perspective always beckons us one step further because ‘history does not give rise to hope; hope gives rise to history.’ Rabbi Sacks was an agent of hope and the vision he sketched will take lifetimes to fulfil.

4) The highest form of leadership is teaching

Like most of the quotes I have shared, Rabbi Sacks could have been talking about himself when he said, ‘the great leaders are educators, teaching people to understand the meaning of their time.’ Every encounter with Rabbi Sacks was a lesson, every phrase a teaching, every act a tutorial. He was the ultimate ‘text-person.’

My final meaningful encounter with Rabbi Sacks took place for a few hours in his home around a year ago. We began in his study, surrounded by books, and then moved to his living room, surrounded by more books. And I thought to myself that the true library was in his mind and his capacity to catalogue, categorize and curate the different ideas was part of his genius. Now his own books adorn the digital and physical shelves of millions of libraries, homes, and websites alike, continuing to teach us and provide educational companionship.

To paraphrase Rabbi Sacks, who would have thought that a group of slaves, escaping from the tyranny of Egypt in the barren desert over 2000 years ago, could share a message that would transform the world’s moral landscape? More recently, who would have thought, that a handful of survivors, after staring eyeball to eyeball with the angel of death in Auschwitz, would build and rebuild our flourishing homeland. History thus teaches that while it may seem illogical to believe in the power of a people – we can and we must believe in our people. As Rabbi Sacks put it, ‘faith is the defeat of probability by possibility.’

With a deep appreciation of the history of the Jewish people, he believed in all of us more than we often believe in ourselves.

6) Leaders need a sense of timing and pace

When Moses asked God to choose his successor, he stated that such a person should ‘go out before them and come in before them, lead them out and bring them in.’ Rabbi Sacks highlighted the apparent repetition as bringing our attention to a fundamental truth about leadership. While one should lead from the front, one should not go so far ahead that when one turns around, the people are too far behind.

Again, he fulfilled his own words: ‘leadership involves a delicate balance between impatience and patience. Go too fast and people resist. Go too slow and they become complacent. Transformation takes time, often more than a single generation.’ Clearly, his influence has transformed the Jewish world profoundly, but we are yet to see the true transformation he achieved, something the generations to come can only look forward to.

7) We are all summoned to the task

It is this idea that Rabbi Sacks called ‘probably the deepest Jewish truth of all.’ While exceedingly humble, he was acutely aware of the task to which he was summoned. He treated it with absolute sanctity and it was his guiding principle. His time was precious and he always stayed on task.

After seeing so many well-known and less known leaders emerge in sharing how he inspired them, it is clear that he succeeded in elevating others to make this choice. He often said that: ‘good leaders create followers, great leaders create leaders.’

8) Every moment is an opportunity for leadership

Rabbi Sacks argued that ‘we are all called on to be leaders within our sphere of influence, be it the family, the community, at work, among colleagues, or in play among teammates.’ In this sense, he is inviting everyone to shoulder the responsibility of these leadership lessons in their own life in everything we do.

May the blessings of one of contemporary Judaism’s greatest leaders stay strong in our memory and may his memory be a blessing. Yehi Zichro Baruch.

Rabbi Dr. Benji Levy is a founding partner of Israel Impact Partners, which works with funders to accelerate the growth of the non-profits they care about. He is the former CEO of Mosaic United, a strategic partnership between the State of Israel and global Jewry. An oleh from Sydney, Australia, he previously served as the Dean of one of the largest Jewish schools in the world, Moriah College.