“I don’t wear a yarmulke on a day to day basis…but when I was down there, I put on a yarmulke and it immediately created a connection for people to come and talk to me.”

“You and I will change the world.” This famous line from Israeli song, Ani Ve’atah perfectly expresses the Young Judaean drive to make a difference. This phrase rings demonstrably true for two Young Judaean alumni and FEMA responders, Michael Plostock and Dan Shulman, who were called down to Surfside, Fla., to help following the collapse of Champlain Towers South. Both men have a long history with Young Judaea, attending junior camps as children, Camp Tel Yehudah as young adults, and eventually holding leadership positions and traveling to Israel for Year Course and summer programs. Although their lives took similar paths, the two men had yet to meet until a dinner at the beginning of their deployment in Surfside.

Dan recalled, “We were just sharing as Jews do, playing Jewish geography, and it took all of two minutes for Michael and I to realize we were both alumni of Young Judaea. And just like that it was like, “Hey remember this? And remember that at Tel Yehudah? Instantly having that connection added a personal element to the response.”” 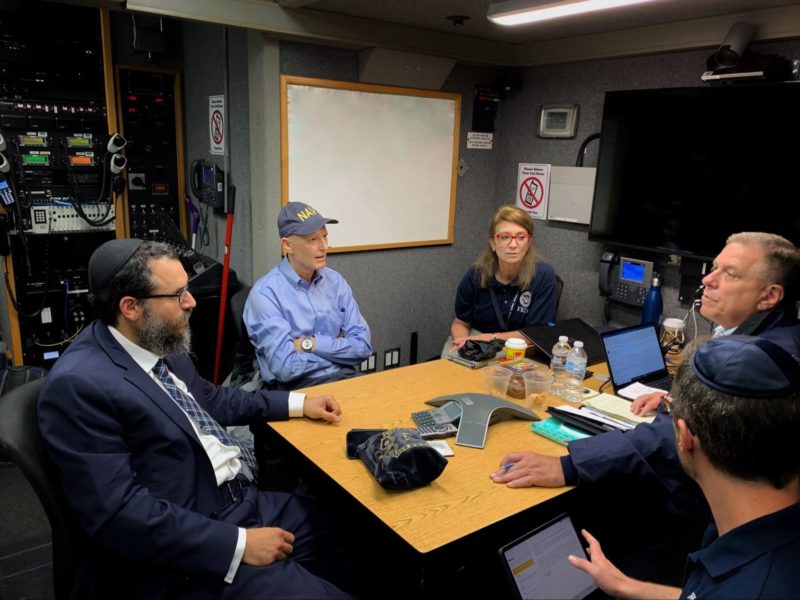 While working for FEMA, both Michael, as the senior advisor for response and recovery, and Dan, as an external affairs specialist, have experienced deployments to disasters around the country including Hurricane Katrina, the Flint water crisis, and Hurricanes Harvey, Irma, and Maria. Both men noted, however, that this tragedy was strikingly different in the way that it touched them personally due to the many Jewish families affected and specifically by the way it reached the Young Judaea community.

Dan recalled, “When the building collapsed I connected on Facebook with a friend of mine from Young Judaea who was in the building at the time and thank G-d was able to get out, but then I discovered through my friendships from Tel Yehudah and Israel programs a lot of secondary connections to families that were in the building…there was really a personal connection and a desire to try and be helpful.” Michael shared that “Within hours of the building collapse, I heard from several Judaeans asking if I had any more information about what was going on. Friends from Young Judaea immediately wanted to know what they could do to help.”

While in Surfside, Michael and Dan’s responsibilities were that of ‘community liaison to the Jewish community.’ Dan explained, “Our personal ability to relate to the families that were affected by the collapse allowed us to bring a little bit of cultural awareness to people who may not have ever dealt with a casualty event involving observant Jews, and brought perspectives to the issues that we were going to encounter in the response and long-term recovery of this event.” Michael shared that “FEMA and the local authorities were committed from the start to be as empathetic as possible, and to respect Jewish traditions and law in the response.”

As the days and weeks went on, various circumstances arose in which the men felt their Jewish background was able to provide comfort and a sense of familiarity to those in the midst of a crisis. Michael recalled being asked to say Kaddish with a family whose child had been recovered, attended several shiva houses during his time there, and was asked to put on tefillin with a family who waited to get information about their loved ones. “I don’t wear a yarmulke on a day to day basis…but when I was down there, I put on a yarmulke and it immediately created a connection for people to come and talk to me.”

Along with creating connections with families due to simply being Jewish, both men found that meeting people at Surfside who were a part of Young Judaea allowed for an even deeper connection. In a conversation with a family that both Michael and Dan knew second-hand through Young Judaea, the family extended an open invitation to come to a Shabbat meal at their home the next time he was in their area. Michael and Dan found the moment symbolic of the power of the Young Judaean community to make such a comment during such tragic circumstances.

Dan noted, “[I was] thinking that even during this tragedy, and this terrible conversation, there’s the thought that there will be a time of normalcy in the future when we’ll see each other and we’ll be able to sit down and share a meal together, and it won’t be about this. It will hopefully be a happy time.”

Michael and Dan’s professional career with FEMA has at times been emotionally taxing, dealing with unspeakable tragedies in often austere working conditions. It has been crucial for them to make sure they take care of themselves while taking care of others. Dan explained, “I talk to my kids every day, and hug them real tight when I get home…it’s a challenge for us as responders and that people who spend time in disasters struggle with.”

On his way down to Surfside, Michael tried to define what his measure of success would be. He decided “If I am able to make one person or one family’s tragedy a little less severe for even a minute than that would be success. I’m not going to be able to bring back people who were lost in the collapse, not going to be able to rebuild homes anytime soon…over the course of the three weeks a lot of my job became just listening, having an open ear and listening to people.”

When asked why they continue this often difficult and emotional work, both replied without hesitation that the ability to make the worst circumstances even the slightest bit better fuels their drive to keep going. Dan summarized, “I stay because there are those days when you can really help a survivor, and you can bring them out of tragedy and provide a measure of comfort, and those are the really good days.”

Young Judaea mourns the passing of all the victims in the recent tragedy in Surfside, Florida. Among them were several Young Judaeans.

May their memories be a blessing.

Hannah Lane is a member of the professional team at Young Judaea Global.