Early Starters, an Israeli-founded nonprofit, has set up early childhood education and care centers in Moldova and Israel to serve Ukrainian child refugees. 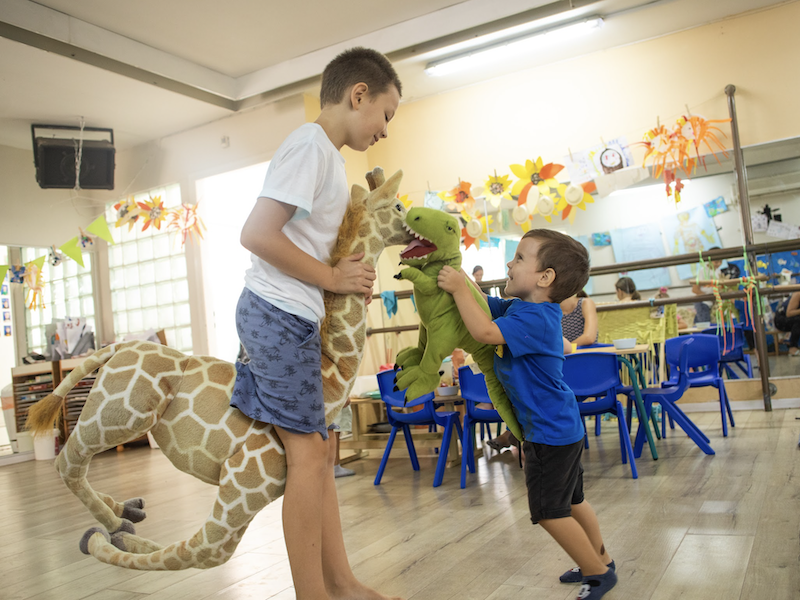 Ukrainian refugee children playing in one of Early Starters International’s facilities in Netanya, Israel in August 2022.

When she thinks about her time working in refugee aid this year, Yulie Khromchenco recalls the story an Israeli volunteer in a childcare center in Moldova shared with her last week. As he walked out alongside a quiet 6-year-old girl, preparing to play ball, she told him he resembled her father back in Ukraine whom she hadn’t seen for several months.

“I think it’s a moment where we know that an important connection was formed,” Khromchenco, Eastern Europe program manager of an organization called Early Starters International, told eJewishPhilanthropy. “It gave her an opportunity to voice her feelings towards that — that she misses him, that she knows or hopes that she will see him again.”

Such moments of safety and comfort are the raison d’etre of Early Starters, an Israeli-founded nonprofit that, working with IsraAid, has set up six early childhood education and care centers in Moldova, along with another seven in Israel, to serve displaced Ukrainian children and maintain their access to education. In total, the group serves 3,500 Ukrainian children.

“It’s the right of the children to have quality education in the early years, even if they are in a war and [are] refugees,” Ran Cohen Harounoff, the group’s co-founder, told eJP. “Good quality education, with dignity, with warm space, with a great staff that hugs them, that talks to them and listens to them.”

According to the United Nations High Commissioner for Refugees,  almost one third of Ukraine’s population has been displaced since the Russian invasion began in February, with more than seven million refugees documented across Europe. Half of the refugees are estimated to be children.

Research shows that “[this] is when we have the most impact for children, not only when it comes to development and learning but also on social-emotional levels and the well-being of people when they get older,” said Early Starters co-founder Sarah Wilner, a Canadian-Israeli special education teacher and trainer who previously worked at Israel’s MASHAV Carmel International Training Center, a part of Israel’s international development agency.

Wilner and Cohen Harounoff founded Early Starters in 2017 while working together in Ghana, where they noticed a need for quality early childhood education programs. Cumulatively, the group has served 50,000 young children.

The organization has developed educational programming  for young refugee children in various countries including Greece and Malawi, and has worked with more than 300 schools in Ethiopia to prevent trachoma, an eye disease that affects 20% of children in the north of the country, leaving up to 5% blind. Alongside the Israeli nonprofit Nala, which focuses on combating neglected tropical diseases, Early Starters helped children to change their behavior to prevent the spread of trachoma — something that has “a ripple effect as well in the community,” said Wilner.

For Cohen Harounoff, Early Starters’ mission assisting children in crisis situations has deep personal roots. As a young child during the Holocaust, his mother was hidden for three years by a Dutch non-Jewish family. During that time, the family’s young daughter, Fiet Primowees, went to school while keeping the secret. Cohen Harounoff is still closely connected with the family.

Passing through the town of Palanca on the border between Ukraine and Moldova and seeing the tents set up for Ukrainian refugees by international aid organizations reminded him of the Holocaust.

“I really feel that my mission is trying to do some good in the world,” said Cohen Harounoff. “[Feit’s] parents are my idol for those things. And I learned from them. I am not risking my life. They risked their lives to save a child that they didn’t know. So [this is] the least we can do.”

Khromchenco was born in Moscow and came to Israel as a child. An educator training young teachers there when the war in Ukraine started, she felt the need to do something but didn’t know what. After seeing a Facebook post by Cohen Harounoff recruiting Russian-speaking educators, she offered to help. In total the organization has recruited roughly 50 staff members and volunteers to serve Ukrainian children.

“Then he called me and said, ‘OK, well [we’re] flying in two days to move over [to Moldova], get ready,’” said Khromchenco. “So, I got ready. And I guess you can never get ready for such a thing.”

Moldova has become a corridor for tens of thousands of Ukrainian refugees traveling to other countries, and is one of the poorest nations in Europe. Khromchenco said that it has insufficient infrastructure to support the influx. Shelters have been set up in inappropriate places, she said, such as an athletic stadium that was converted to house 800 “women, children, elders, dogs, cats, altogether.”

In collaboration with the Israeli disaster relief organization IsraAid, which provides Early Starters with psychosocial support across its work, the organization created a “safe quarter” for children within the stadium, with walls and a door, and has since established another five sites in the country. Children accessing these spaces range from under 2 to 11 years old.

“When we were just entering the stadium, we had a flock of kids coming with us because they saw us with all the materials and toys,” said Khromchenco.

She told eJP that it’s important to furnish such spaces with carpets and sturdy wooden furniture that make it feel like a home, and to include a structure resembling a small house inside for children to play in.

“So many kids replay the experiences they had in Ukraine through games,” she said. “And that’s a therapeutic way as we see it to [reexperience] that again, to have some healthier grasp on reality.”
Intentionally celebrating children’s birthdays also adds to a sense of belonging, said Cohen Harounoff. This creates space for the complex questions that arise for children while commemorating an ordinarily happy and purportedly normal day in challenging circumstances.

Each drop-in space is staffed by at least two team members, including local Moldovan educators and women refugees who receive stipends. That allows the children to participate in engaging activities while establishing emotional connections with Ukrainian volunteers who have a similar background.

Seeing the organization’s work in Moldova, UJA-Federation of New York provided funding to Early Starters, which has a budget of $500,000 and a core staff of five, to create similar spaces in Israel for Ukrainian refugees who are not eligible to access government benefits by obtaining citizenship. In July, Early Starters opened seven spaces across Israel in one week with 35 staff members, including educators, psychologists, doctors and volunteers who speak both Russian and Hebrew.

The centers in Israel serve children ages 3 to 7. In Israel, the same children show up every day, while in Moldova, each day finds a different set of children. The Israeli centers were opened in collaboration with the Jerusalem Variety Center and Yalduta, two nonprofits that focus on children’s development.

In Cohen Harounoff’s view, the older kids’ engagement in games traditionally reserved for younger children has also been a “way to overcome the trauma that they have been in.”
Parents have shared how, after their kids spend time in these spaces, they have transformed from being tense and stressed to happily running to kindergarten, making new friends.

The spaces have also provided an opportunity for mothers who volunteer to receive financial support, learn about innovative educational methodologies, forge friendships and process their own trauma while knowing their children are being cared for, said Wilner. In Israel, the group offers a weekly parent-child support group for families, providing additional support for children with special needs.

In addition, the centers have been places for building bridges between Russians and Ukrainians. For the Ukrainian children in Israel, it was initially strange to have Russian teachers, said Cohen Harounoff.

“In the beginning, Russians [were] the enemy,” he said. “And here, there’s a Russian teacher that we really like. And she’s not this enemy that we heard about on the news, that our fathers are fighting.”

Early Starters is currently working on creating a TV show to educate the broader community in Israel as well as more broadly in Europe about the refugees’ situation, to combat racism and encourage welcoming behavior.

The organization is also planning to help open early childhood education centers in Ukraine, so they’ll be ready to support children when they return to a country that has been devastated by war.

“What is great to observe is the interaction that happens between the children [of] different ages,” Khromcheno said. “There [develops] a very strong connection between the older kids and the youngest kids based on much empathy and solidarity and helping each other. Kids play with each other, kids care about each other, and I think it’s strengthened everyone.”