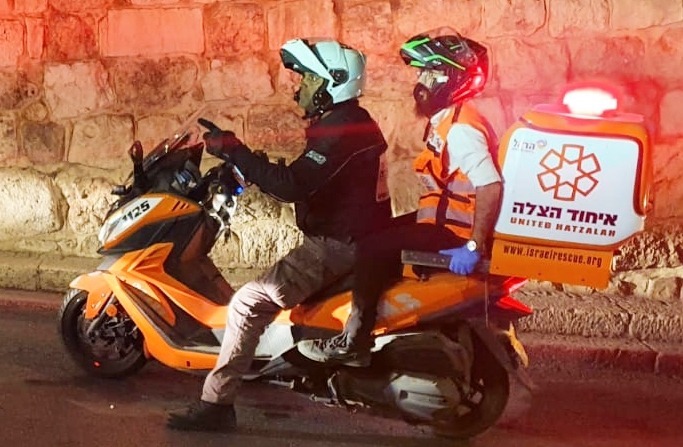 United Hatzalah, Israel’s volunteer emergency medical system, has launched a fundraising operation in San Francisco, its fifth in the United States, said Michael Brown, a vice president for the organization. The famously liberal Bay Area, home to frequent criticism of Israel, might strike some as an unusual place for United Hatzalah to land, but the organization’s pluralistic nature and its savvy use of technology actually make it a natural fit, said Mark Donig, the lay leader and Bay Area native who is leading the creation of the new chapter.

“This is an organization that has really good people behind it, and is doing really holy work,” Donig said.

United Hatzalah’s volunteers are a cross-section of Israeli society, including Christians, Jews and Muslims, Donig noted. They serve everyone, and their response times are among the fastest in the world — an average of three minutes in Israel, and 90 seconds in Jerusalem.

“I know an Israeli woman who thought all Arabs were a threat,” Brown said. “Then an Arab saved her granddaughter’s life. There are very few experiences that can create that kind of emotional change in someone. And that story confounds most people’s understanding of what life is actually on the ground in Israel.”

Hatzalah’s use of technology to reduce its response times has proved interesting to Silicon Valley, said Donig. Especially in the period leading up to the 2020 election, amid widespread disenchantment with technology’s capacity to amplify disinformation, he sensed an appetite for stories about how tech can be “used for good,” he said.

Marc Benioff, CEO of Salesforce, has helped United Hatzalah tell this story, Brown said. When United Hatzalah CEO Eli Beer was visiting the United States in early November, he visited supporters at Salesforce’s headquarters to discuss how the organization uses the software to track and manage its donors, as do many nonprofits. United Hatzalah has also found other uses for Salesforce, which have enhanced its fundraising capacity, Brown said. For example, its donor management program interacts with its medical equipment database in a way that enables United Hatzalah to tell donors what their gift has helped to buy, and how it’s being used, almost in real time.

Donig, a lawyer with Covington & Burling who is based in New York but travels frequently to the Bay Area, started creating a group that would generate support for United Hatzalah in Northern California in 2019, he said.

A 2016 graduate of the UC Berkeley School of Law, Donig serves on the board of advisors for the school’s Helen Diller Institute for Jewish Law and Israel Studies. While in law school, he helped lead an effort to prevent the German deportation of a Sudanese activist, Mohamed Abubakr, by bringing him to the United States. Donig serves as outside counsel to the Amel Project, led by Abubakr, which aims to empower young leaders from the Middle East and Africa.

Donig was helped in that process by Carolyn Kangavari, who directs United Hatzalah’s Los Angeles operation, and Jerry Silverman, former CEO of the Jewish Federations of North America, who helped him clarify his mission and strategy.

Donig assembled an advisory board for United Hatzalah in the Bay Area that features gender parity and a wide range of observance levels and professional backgrounds. The group has tried to compensate for pandemic-era restrictions on in-person gatherings by holding virtual events.

The effort has raised slightly more than $100,000, and engaged more than 500 new potential supporters, Brown said.

The group does more than raise money, Donig said: “There’s a fundraising component. They can’t do their work without money. But we’re also sharing the brand of Hatzalah, and this wonderful side of Israel.”