The Marcus Foundation has granted $1.5 million to Trybal Gatherings 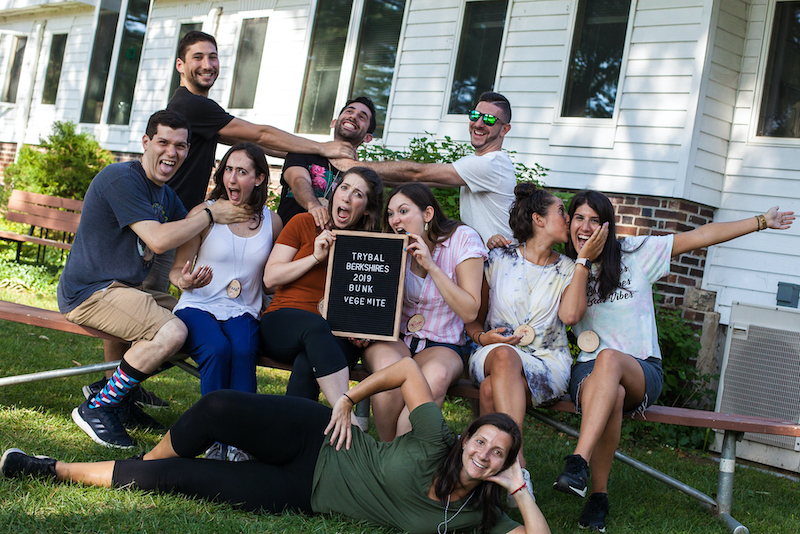 Bahareh Aghajani’s Iranian immigrant parents didn’t know Jewish summer camp was an option for their daughter when she was growing up in the early 2000s. So in 2019, when Aghajani saw a mention in the Jewish Federation of Greater Los Angeles’ newsletter about Trybal Gathering, also known as “Jewish summer camp for grownups,” near L.A., she was sufficiently intrigued.

“It looked amazing on the website, but it was even more fun in person,” said Aghajani, a lawyer. “It felt Jewish. We did Shabbat; everyone dressed in white for dinner. [Jewishness] was woven throughout.”

Founded about five years ago by Carine Warsawski, Trybal Gatherings recently received what she calls a “transformative” $1.5 million in funding from the Marcus Foundation over the next two years. The gift will be used to grow Trybal Gatherings’ staff and explore new locations. The donation is five times the amount of any grant Warsawski has ever received.

“We’d been talking to [the Marcus Foundation] for a while,” Warsawski told eJewishPhilanthropy. “But I wanted to keep my expectations in check. When I got the phone call I kind of slid off the couch. They told me to just let it sink in.”

Raised in the Boston area, Warsawski attended the Union for Reform Judaism’s (URJ) Camp Eisner and studied in Israel as a high school student. She attended Bates College in Maine, and then worked for such organizations as Authentic Israel and the URJ’s Israel programs department. She won a Wexner graduate fellowship to fund an MBA at Boston University’s Questrom School of Business, and assumed she would return to the Israel travel field, but felt inspired by Israeli entrepreneurs to start her own venture.

In her second year of business school, in 2016, she wrote a survey asking millennials what they wanted in Jewish programming, and a former boss agreed to disseminate it for her. From the responses, and from the focus groups with federations in Atlanta and Los Angeles that followed, Warsawski learned that they wanted experiences of between three to five days, within three hours of home, and that they were open to both Jewish and non-Jewish participants.

The next year, she held the first Trybal Gathering at Camp Eisner; seven more had been held by the time the pandemic forced the cancellation of the 2020 season.

The gatherings offer camp classics like color war, in which teams assigned a color compete in various games, and bonfires — with the possible bonus of a spiritual or romantic experience.

“People are deciding between a weekend in Cancun or Coachella or this Trybal experience,” Warsawski said. “We take sexy experiences in the secular space and make them Jewish. Everything feels a little bit more Jewish afterwards. We add in this Jewish glitter to people’s everyday life.”

Archie Gottesman, the co-founder of Jewish outreach organization JewBelong, is an admirer of Trybal Gatherings. JewBelong is known for its use of polished, witty marketing campaigns that aim to reach people who might not otherwise be interested in Judaism. She said Trybal Gatherings has struck a nice balance in its Jewish content, which is substantial, but not heavy-handed.

“We love Trybal’s approach to making people feel welcome wherever they are with their Judaism, with their lives, and yes, with their cocktails! We often get comments from JewBelongers that traditional Judaism can be intimidating because it comes in hard and serious. And frankly that does not appeal to everyone,” Gottesman said.

Warsawski has noticed that campers tend to break down into four groups: those who don’t want to miss out on the party; the do-overs, who didn’t enjoy camp or get to attend the first time around; the tagalongs or camp-curious; and, of course, the “nostalgics.”

She started the organization with money out of her own pocket, and at first received more support from corporate sponsors like Sam Adams and Coffee Bean & Tea Leaf than the Jewish community.

The Joyce and Irving Goldman Family Foundation approached Warsawski, and was an early supporter. She also has funding from the Jewish Community Foundation of Los Angeles and Crown Family Philanthropies, as well as other individuals, family foundations, federations and JCCs.

“Trybal’s creativity clearly has struck a nerve with young adults and strengthens their Jewish identity,” Marcus said in an email. “It is important that we support efforts to bring immersive programming to more locations and young adults around the country that lead to strong Jewish connections.”

Like other groups that provide in-person experiences, Trybal Gatherings created virtual events during the pandemic, but Warsawski also turned this past year of quarantine and lockdown into a business opportunity. She developed online product offerings including events like parties and bar mitzvahs and training. More than 250 other Jewish organizations, including federations, day schools and synagogues, have learned from Trybal Gatherings how to create more enjoyable virtual programming and engagement. Accenture, the consulting firm, and a biotech startup are also among the new clients.

Now the focus is back on camp. The plan is to host four sessions this summer — in Massachusetts, Southern California, Chicago and Georgia — for a total of about 400 people. Registration will start in the coming weeks.

At the same time, the bigger planning process has started. The grant from the Crown Family Philanthropies includes money for a strategic plan, and as Warsawski grows her numbers, she also aims to make Trybal Gatherings more inclusive. The experience can cost up to $800, and while local federations in Chicago, L.A. and New York all provide some financial support, she wants to grow the pot available for one-time subsidies along the lines of the Foundation for Jewish Camp’s One Happy Camper grant.

She gets a lot of requests from empty-nesters, people 55 and older, who are presumably envious of the experience their children are having, to offer gatherings for them as well. She likes the idea, of course: “When people bring their best selves to an experience, they’re having fun; I like to create those environments for people.”