When mid-level management is excellent, an organization can thrive and do exceptional work. I’d go so far as to say that the power and success of any organization comes from its center — from the leaders who oversee its day-to-day operations and supervise the staff doing critical work in the trenches. These are the managers and leaders who are tasked with executing the organization's priorities, and they’re the ones delivering results.

One of my favorite stories from the Obama era was that of his female aides, who took to amplifying each other in important meetings, embracing Shine Theory — the idea that when women lift each other up, it raises all boats. I first learned the story from a then-colleague at the Religious Action Center of Reform Judaism, where I was blessed to work for nearly eight years. We began to do what the Obama aides taught by their example — lift up each other’s contributions in meetings, echo the good ideas of our female colleagues and call out and applaud the success of other women.

As we head into this week’s celebration of Purim, I’ve been thinking a lot about this story and about the concept of Shine Theory. I’m inspired by Queen Esther, who spoke truth to the patriarchy. I want the Jewish world to stop and take a moment for a deep, collective “shine,”  and acknowledge the unsung heroes doing the most critical work at so many of our large Jewish institutions — women in mid-level leadership roles. 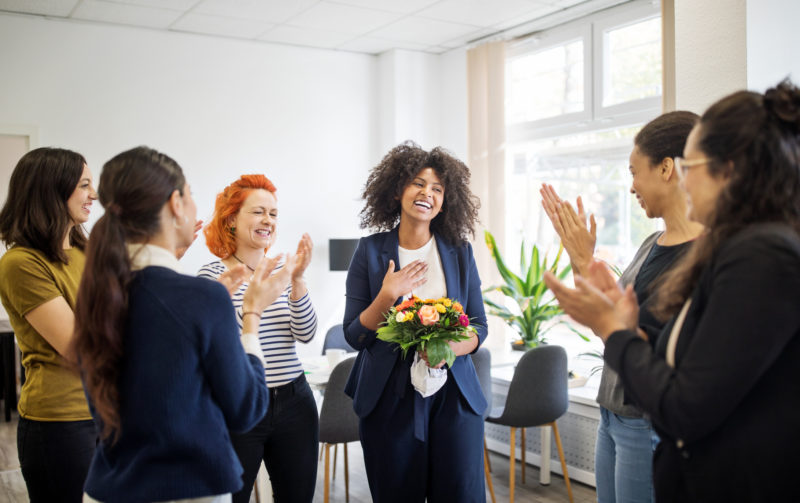 When mid-level management is excellent, an organization can thrive and do exceptional work. I’d go so far as to say that the power and success of any organization comes from its center — from the leaders who oversee its day-to-day operations and supervise the staff doing critical work in the trenches. These are the managers and leaders who are tasked with executing the organization’s priorities, and they’re the ones delivering results.

The center is where leaders work to lift red tape, cut through bureaucracy, train the next generation to lead and actually do the work required to create the conditions that allow for change.

During my time at RAC, as a professional coming into my own leadership and role as a manager, it was always a valuable opportunity to see other seasoned, experienced and thoughtful professional leaders running URJ summer camps. These leaders were — and are — primarily women.

At camp, I thought about how the director must fall asleep each night with the weight of the knowledge that she was responsible for the health, safety and wellbeing of nearly 700 people. That isn’t the work, or the sleep, of leaders leading from the C-suite or HQ; it’s the work of a leader who goes to bed each night embedded within the communities they lead. I have deep awe and admiration for their leadership and immense gratitude and respect.

I’ve been proud to watch URJ Camp Harlam create and live by its “Open & Safe” philosophy, which centers inclusion, safety and equity at the core of its mission. It’s more than just a campaign; it is a commitment to a way of life and a set of deeply held values. Camp’s commitment to being an “open & safe” community creates a framework that guides organizational priority-setting as well as day-to-day problem solving.

Like URJ Camp Harlam, all of today’s URJ summer camps represent the gold standard in Jewish camping, working to create communities that are safe, inclusive and welcoming. It would be dishonest to praise them for it, though, without shining a spotlight on the hard-working individual leaders who work tirelessly in the name of the organization.

The women leading at the center of the camping system don’t just form task forces, curate PowerPoints and develop training modules; they do the critical work required to reckon with an often problematic, larger-than-life, days-of-yore culture. This is the day-by-day, in-the-trenches work necessary to create communities to which we are proud to send our children: building gender-neutral bathrooms, connecting with families to ensure each child is set up for success, raising scholarship funds to make camp a reality for all those who want it, investing in social work teams and best-practices inclusion training.

And the excellent in-the-trenches female leadership at the center of our Jewish institutions extends further than camps. I’m sure everyone reading this knows the people at their organization who I’m talking about: the unsung heroes who get the work done. The ones to whom our organizations owe so much of their reputations and realities.

The generation of talented, creative, powerful women who are coming up the ranks are the ones best poised to lead right now, in this moment, “for such a time as this” (Esther 4:14). As a country and a world, we are on a brink, desperately in need of progress. Now, let’s get out of their way and let them lead us.

Shira M. Zemel is the co-director of 73Forward: National Council of Jewish Women’s abortion access campaign. Previously she was director of youth leadership development at the Religious Action Center of Reform Judaism. She is a proud alum of URJ Camp Harlam, Heller High (formerly NFTY-EIE) and a devoted member of her synagogue, Temple Micah in Washington, D.C.